Five of the best places to eat chips in London 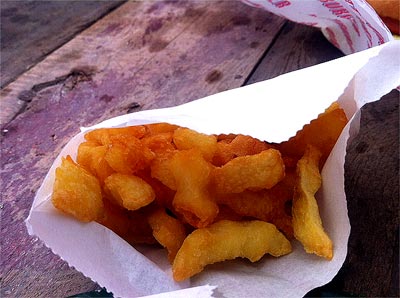 OK - we're a little late for National Chip Week - a glorious week-long celebration of the fried potato that was - ahem - last week, but it sparked our idea to pick out some of the chips we rate around London.

We deliberately haven't picked out fish and chip shops mainly because everyone has their local favourite and our experience has, sadly, always been that they're better by the sea than in London. But if you really disagree - add your favourite to the comments section below.

Just this week Grace Dent praised this Argentinian restaurant's chips for being "the most garlic-laden foodstuff I’ve ever encountered. Utterly delicious but dangerous to one’s social life". And she's not the only critic to fall in love with them - the Guardian's Marina O'Loughlin going so far as to call them "chips of joy". Chips “provenzal” at Zoilo will set you back £3.95 and take you off the dating market for a good 48 hours.

On the downside you have to eat these chips in an shack off Highgate Road, on the upside that shack is part of the Soho House group, so it's pretty toasty really as long as people stop opening the bloody doors. These crinkle cut chips are - almost - as good as the burger you really came here for. Retro, golden and perfect for feeding your face with late night after a gig at the Forum as they're open till 1am on Friday and Saturday.
Crinkle cut fries £2.50

When Huw and Will launched the downstairs bar at Hawksmoor last year, there was one dish EVERYONE wanted to try - the poutine. For those of us who hadn't been to Canada it was a blissful introduction to the messy joys of chips, cheese curds, gravy and meat in a bowl.
Chicken poutine is £7, oxtail is £7.50 and for an extra quid you can throw a fried egg into the mix too.

The rosemary fries at Honest Burger could be the marmite of the London chip world. Some find the homemade rosemary salt they're liberally doused in too strong for their taste, but we liked them just fine. Enough to go back several times in fact and really test these suckers. For the Observer's Jay Rayner they're "the edible equivalent of crystal meth".
House chips with rosemary salt are £2.50.

His triple-cooked chips from Channel 4's 'How to cook like Heston' were the stuff of legend and this is the only place you can get them in London. Head Chef Ashley Palmer Watts explains here how much work goes into making the perfect chip (it's pretty detailed).

Triple cook chips come only with steaks which start at £34 for a Hereford Ribeye with mushroom ketchup.