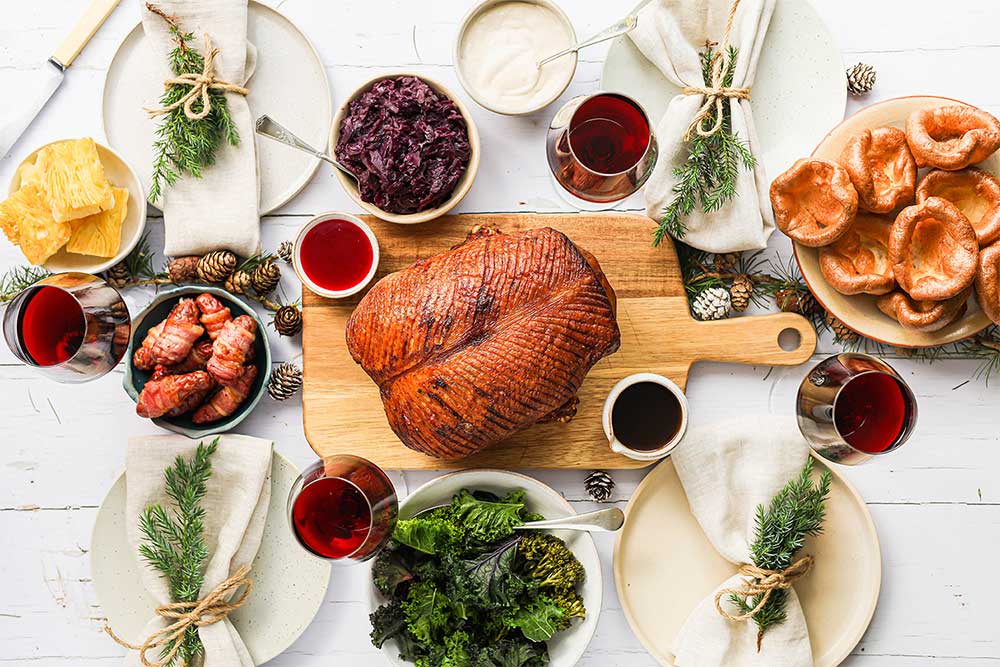 Made in Oldstead's festive offering

Forget scrabbling for supermarket delivery spots. Here's how to get everything you need for lunch on Christmas Day delivered to your door this year. We'll keep this page updated as more boxes are announced.

Hawksmoor (Nationwide delivery) - Hawksmoor at Home has a number of feast boxes for the season. There's the festive fillet, porterhouse (both from £105) or T-Bone boxes (from £115) but as it's Christmas, you'll really want the main Festive Feasting Box (£200). That features fillet and porterhouse steaks, ultimate chips, mushrooms, sticky toffee pudding as well as wine and negronis (served 4-6 people).  Orders must be placed by 16 December.

The Cinnamon Club (Nationwide delivery) - Vivek Singh's restaurant group has a Five-Course At Home Feast at £130 for two with dishes that include a Kashmiri style slow-braised lamb shank, stir-fried Madras shrimps with curry leaf and black pepper and a garam masala Christmas pudding. Last order are 17 December.

Indulge Dining (Nationwide Delivery) - treat yourself on Christmas Eve with this fine dining delivery company's feast. Chef Andy (ex-Fera and Petrus) has put together a kit which includes a mince pie cocktail and four courses including festive petit fours to finish. It's £55 per person. Last orders 21 December for delivery on Christmas Eve.

Cote (Nationwide delivery) - Cote has a number of boxes available, including a festive turkey menu (£85) which includes turkey roulade, cabbage, sprouts, pigs in blankets, potatoes and more. There's a vegetarian version too.

10 Greek Street (Nationwide delivery) - They've teamed up with Dishpatch to offer something different to turkey. The Beef Banquet has six courses, such as Braised beef shin stuffed with onion, Sirloin steak and Spiced ginger cake. (Pre-order from 19 November for delivery on 23 December).

Farmison & Co (Nationwide delivery) - The three-time online butcher of the year winner has a large Christmas range that includes turkey. beef and goose, as well as all the trimmings, gammon, Christmas ham, and more. There's also a full "chef-prepared " section where everything is prepared for you, including easy-carve stuffed turkey, beef or venison wellington and more. Deliveries are 19-24 December.

Tommy Banks' Made in Oldstead (Nationwide delivery) - The man behind Michelin-starred The Black Swan in Oldstead has several Christmas Day boxes on offer, including the Made in Oldstead Beef Wellington Christmas Day Box (from £190). That's a four-course menu including Cold Smoked Salmon served with Whipped Buttermilk and Pickled Fennel, a Beef Wellington with all the trimmings (including ducks in blankets) and a Chocolate & Woodruff fondant pudding. Duck crown and vegetarian versions are available.  Last orders are 18-20 December depending on the box.

Corrigan's - (Collection-only) Richard Corrigan's Christmas feast hamper has to be the perfect start to Christmas (or Boxing Day) morning. There's Champagne, ham hock and foie gras terrine, a smoked salmon blini kit, homemade mince pies and a signed cookbook too. It's £90 for two and last orders are 19 December

Gunpowder - (Nationwide delivery) For an alternative take on the Christmas turkey Gunpowder have a take on the popular murgh mussallam with their festive stuffed Cornish, corn-fed chicken.It's £22, feeds two and is delivered nationwide on 23 December.

All in a box - (Nationwide delivery) as the name suggests everything you need for the day itself is supplied by this delivery company. Choose your starter and main and you'll get Christmas crumble for dessert along with crackers, complimentary mince pies and a mulled wine kit. Prices start at £60 for one and delivery is on 22 December.

The best meat delivered in London from butchers and more

If you care where your meat comes from and to what standards it's been produced, we’ve rounded up some of the best meat to get...
Read more