In the opening months of 2013, ‘Burgers’ have been the word on everyone’s lips. Are we tired of it yet? Not by a long shot it would seem. Yes, we’re aware they may contain Horsemeat, are packed with carbs and will ruin your 5:2 diet, but we’re still crazy about them and have no doubt that we’ll continue to consume them in large quantities. The bountiful array of burger restaurants, one off’s, pop-ups, and streetfood stalls are set to increase further in coming months with yet another wave of openings scheduled from both large international chains and independent’s both new and established.

To help diners navigate the best of the existing offering, we’ve asked well known burger lovers, chefs and food writers to tell us a bit more about their current favourites. 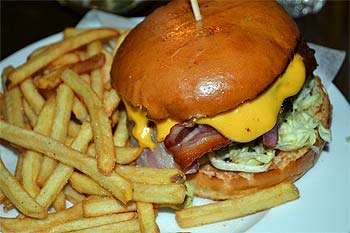 "Okay so let’s start with the patty. 180g of 35 day aged Dexter beef, topped with homemade stringy cheese sauce made from a base of beef dripping and aged red Leicester, smoked bacon, braised short rib and centre bun doused in bone marrow and butter BBQ sauce, topped with pickled red onions all packed into a half and half milk/Brioche bun. It’s the sort of burger that has your lips sticking together, your gut busting out but gets those endorphins really singing."

Find out more about Disco Bistro

Gizzi has just released her first book, Skinny Weeks and Weekend Feasts, published by Quadrille. Follow her on twitter @GizziErskine

The Yankee Burger at Bar Boulud

"I will always choose elegant simplicity over giant, meaty messes. The Yankee burger has the perfect toasted brioche bun, the best quality meat which is cooked to perfection and the patty is just the right size so as not to overwhelm. And where else can you dip your French fries into a decadent truffle mash? Truffle mash is the new ketchup, you know... well, it is in my world. Plus no queuing up for hours in the cold and fighting your way to a cramped table. A little bit of decadence every now and again makes life so much better."

Find out more about Bar Boulud

Sabrina is a Persian and Middle Eastern chef, writer and supper club host and can be found hosting Persian supper clubs as well as pops up at various London restaurants. Follow her on Twitter @SabrinaGhayour 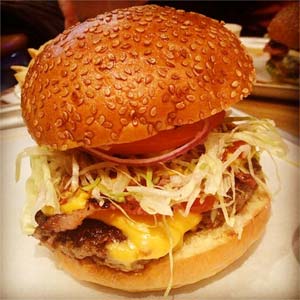 The Lucky Chip ‘Royale with Cheese’

"Inspired by McDonald's Quarter Pounder with Cheese and named to reference that scene in Pulp Fiction (where Vince tells Jules about the "little differences" between America and Europe) Lucky Chip's Royale With Cheese has everything I want from a burger. Namely, an aged beef patty, American cheese, smoked bacon, thin cut red onion, shredded iceberg lettuce, a slice of tomato, ketchup, French's Yellow Mustard – and let's not forget lashings of perfectly pitched nostalgia."

Find out more about Lucky Chip

Burgerac is London’s pre-eminent (and self-styled) burger detective “hot on the trail of the finest burger in town. Follow him on twitter @burgeracblog 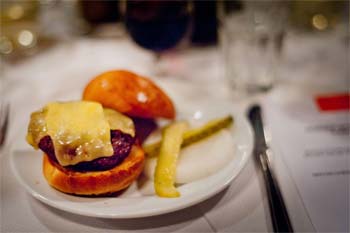 "It's not a massive secret of mine that I don't particularly relish an encounter with a burger. I used to eat a ton of them in my early twenties, but years of the constant mise-en-place snack raiding that goes on in restaurants has ruined my ability to digest large handfuls of meat, cheese, bun and sauce. Every six months or so I'll pluck up the courage, and have over the last few years enjoyed The Ad Cod, Hawksmoor, Goodman's, Honest and Meatwagon patties. The last burger I enjoyed however was Joe Allen's humble off-menu offering, largely because it's so perfectly small, and I was in superb company, which for me is always the most important thing."

Find out more about Joe Allen

Jackson is generally either at the Brunswick House Cafe or Rita's Bar & Dining, where he's just as likely to be found swanning about like he owns the place, as he is to be frantically scrubbing pots in penance. Follow him @Jackson_Boxer 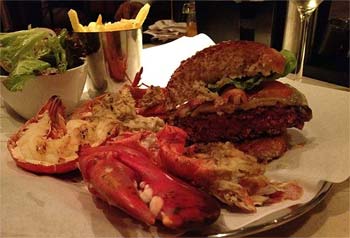 The Burger and Lobster Burger

"When you visit B&L, forget about getting the Lobster Roll, go the Burger. It’s got a good ratio of bun, meat and cheese, and they’ll even cook it rare if you want which is right up my alley. Oh and it’s around the corner from where I work."

Find out more about Burger and Lobster

Ross is proprietor of Bone Daddies ramen bar. He spends most of his time in a basement underneath Soho thinking about stocks. Follow him @RossShonhan 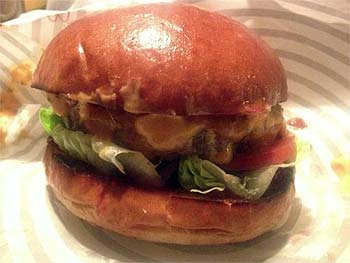 Chosen by Nick Andrews (Hamburger me)

"The Ari Gold from Patty & Bun is my burger of the moment. It features a top drawer, 35-day aged beef patty topped with bacon, cheese, pickled onions and smoky mayo, all wrapped lovingly in a fabulously squishy, toasted, secret recipe bun. This bad boy has been showing up all over London at various events, pop-ups, and residencies, but now it's here to stay in Patty & Bun's permanent home on James Street, W1U. It's at least a three napkin burger, so expect to get down and dirty with it."

Find out more about Patty & Bun

Hamburger Me! is London's Burger Blog. Nick is the author of the burger reviews, the creator of the London Burger Map, a purveyor of burger fashion, a consumer of burgers, and a Meat Winner. Follow him @HamburgerMe 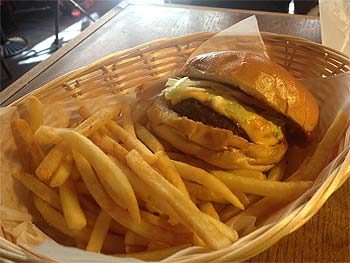 "Of all the new openings this year (and it's been a record year), Tommi's has won us over with consistently tasty, simple burgers and trademark Icelandic charm. Yup, we're as surprised as you are. This cheeseburger is the most American in its provenance that we've found - soft, svelte and beautifully constructed. Until the Americans invade later this year, at least."

Burger Anarchy are two failed musicians writing hypocritical, overly opinionated reviews of American food in Europe and the USA. They also make occasional videos with their friends. They like America a bit too much. Follow them @BurgerAnarchy 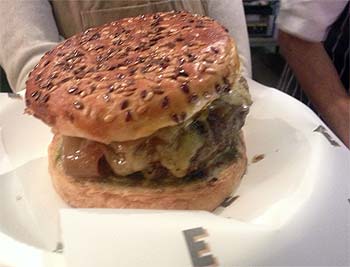 The Cheeseburger at Elliot’s Cafe

"Our current number one burger in town has to be the cheeseburger from Elliot’s Café. A simple looking burger that just smashes it. There’s no bacon, there’s no oversized patty, there’s not even any chips (potato slices instead). This place is all about the burger and the elements that make a great burger. The patty is perfectly seasoned, minced on site and a great size. It’s covered with beer braised onions which are sweet and melt in the mouth, this is out balanced with a strong salty comté cheese. A light dill pickle is spread on the fluffy bun, bringing everything together. Every bit of this burger is spot on right down do the pickled (and peeled!) cucumbers. Nothing overpowers and nothing is lost.

This burger is a must try, everything just works perfectly together. It’s only available midweek lunchtime, so throw a sickie and get down there!"

Find out more about Elliots

Burgaffair is simple. It's two lads' love affair of the London burger scene. They're not food critics, they're not chefs, they're just two blokes who love a good burger. Follow them on twitter @burgaffair

That's not all for burger lovers around London - we'd also recommend the following...

Arguably the people who kicked off the current burger trend in London, each of the MEAT restaurants are often the first place burger fans go to for some of the best burgers in town. MEATliquor is known for its queues, but MEATmission lets you book and you'll never be waiting long at MEATmarket. Find out more about MEATliquor, MEATmission and MEATmarket.

Both the original in Brixton and the recent addition in Soho are well worth hunting out for a simple burger done very well. Find out more.

This sees Soho house getting in on the burger bangwagon, but doing it with style. Easily the best burger in Kentish Town - and we'd expect this to be repeated across town before too long. Find out more

Who knew a South Kensington pub would have a burger worth tracking down? But if you're out west, Fred Smith's creation is one of the best in the area. Find out more.