Who says meat-eaters have all the fun? London's burger joints are after the vegetarian pound, so if you're in search of more than a bean burger in a soggy bun, here are some of the best veggie and vegan burgers in town. 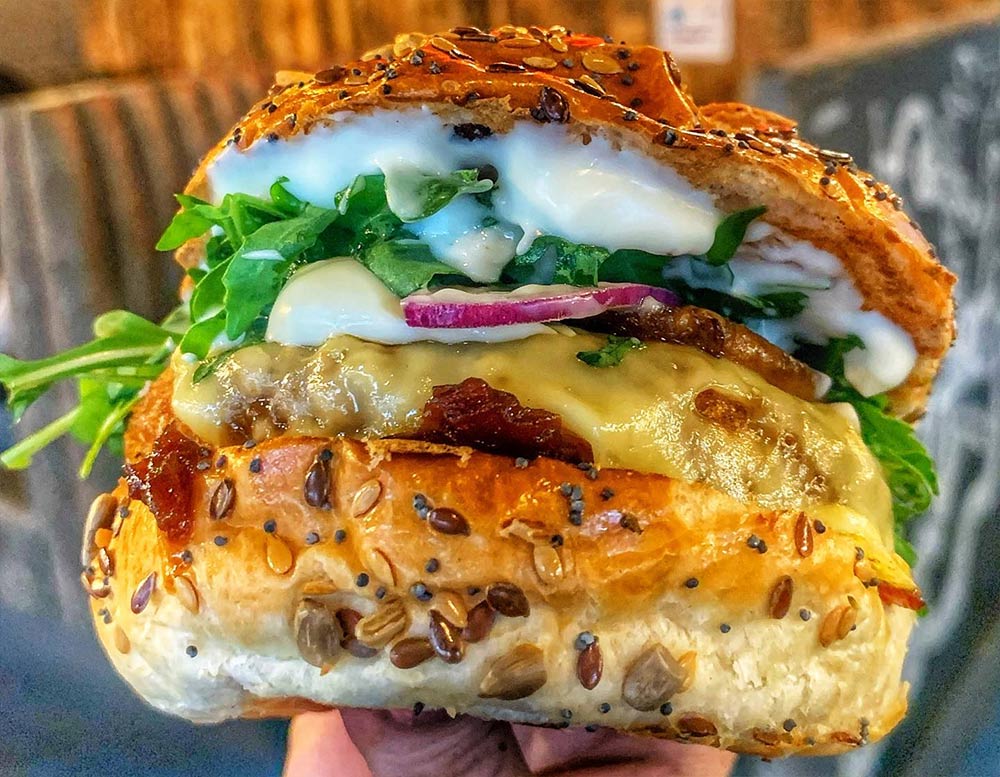 Biff's Jack Shack are known for their jackfruit creations and their burgers are created with a jackfruit patty. They've teamed up with Brewdog to launch a vegan bar in Dalston, with an extensive menu of fast food delights. There are lots of vegan burgers on the list, and we're picking out The Truffle Shuffle - Truffled cracked black pepper mayo, smoked flat mushrooms, bacun jam, rocket, smoked gouda and red onion. Look out for regular specials too.

DIY kits: order from their store 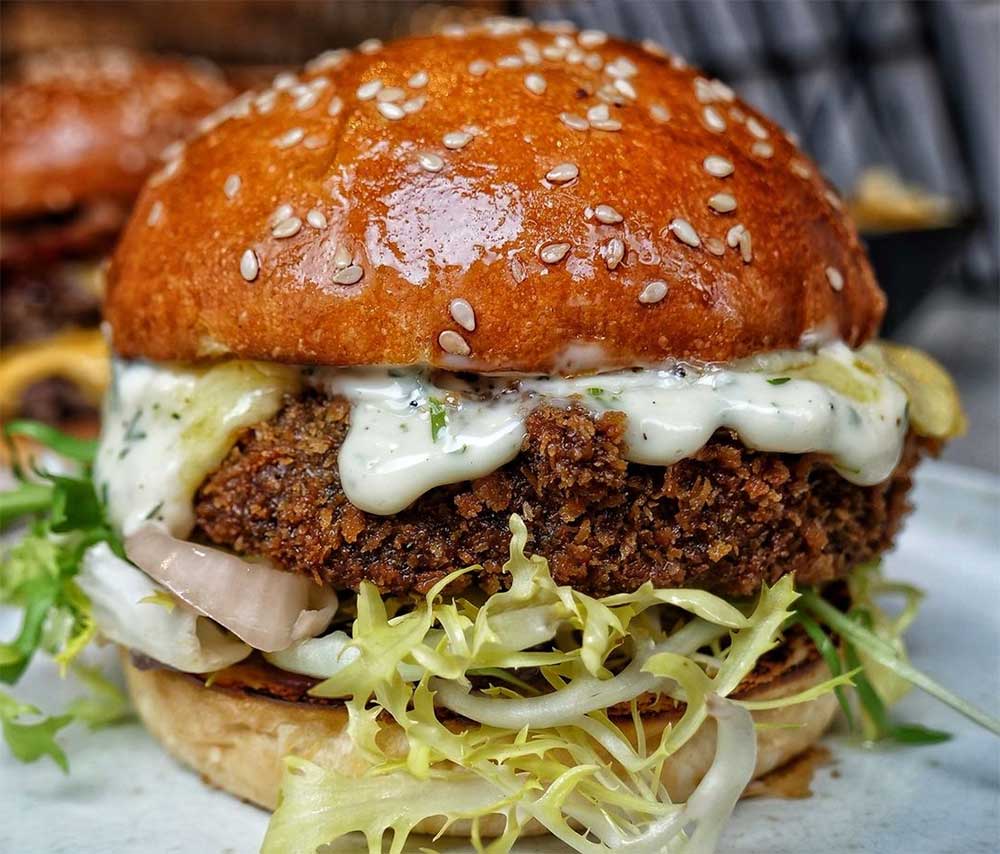 The Burger & Beyond mushroom raclette

They're already pushing the boundaries with their standard burgers, so it makes sense that Burger and Beyond do just the same for vegans. This is panko-crusted mushroom patty, melted vegan raclette, caramelised onion, green leaves and vegan smoked garlic mayo.

Sides: Pair that with some truffle tots on the side and you'll be very happy.

Delivery: from Camden and Shoreditch

More about Burger and Beyond 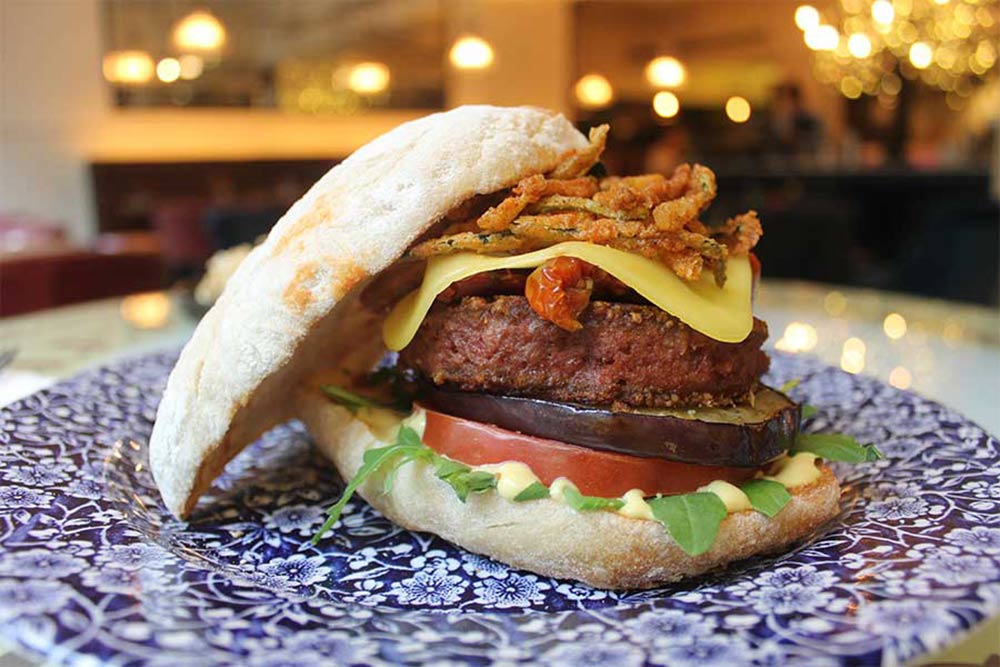 Beyond Le Fumé at Haché

Sides: How about their spicy buffalo cauliflower or kale caesar salad? 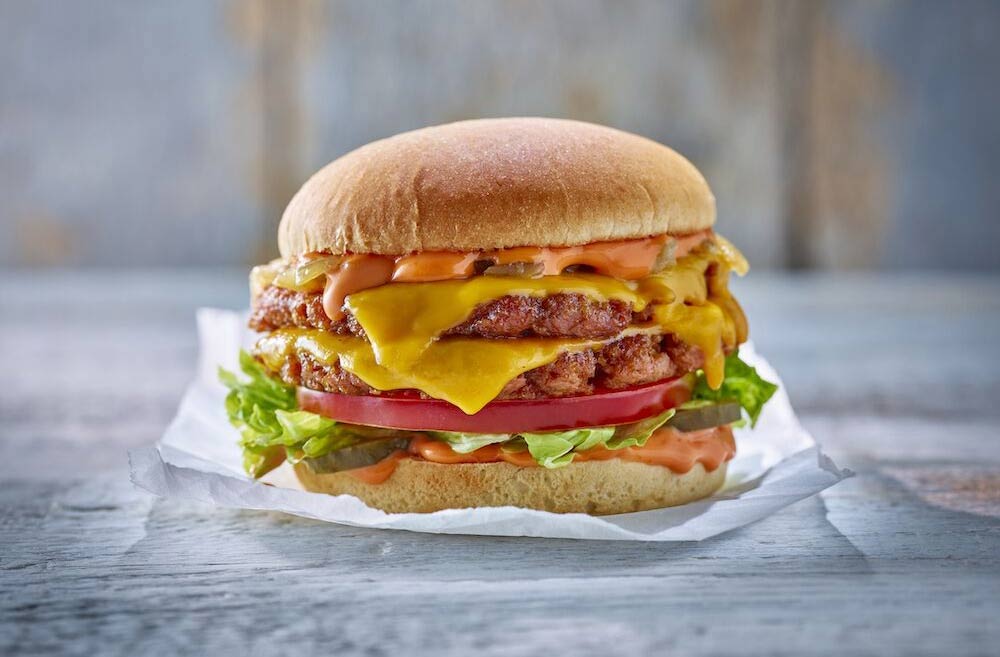 Sides: Make sure to have the Himalayan pink salt fries with melted cheddar cheese, signature sauce and caramelised onions. 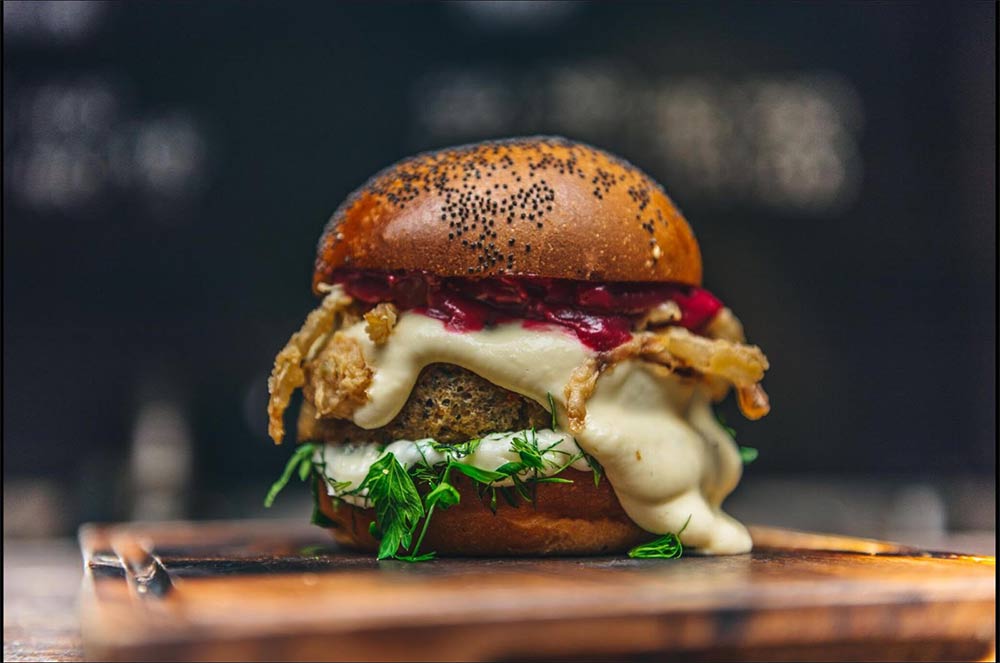 Fitzrovia and The City

Yes, Mac and Wild are best known for their game menus and the venison burger - but they've put just as much effort into perfecting their vegan burger. The Bloody Roots burger still harks to their Scottishness with a veggie haggis, no less. It's "Macsween veggie haggis patty, beetroot ketchup, vegan cheesy fondue, soyannaise, ripped parsley & dill salad - served in a poppy seed bun."

Sides: The truffle mac and cheese (although that's veggie, not vegan).

More about Mac and Wild 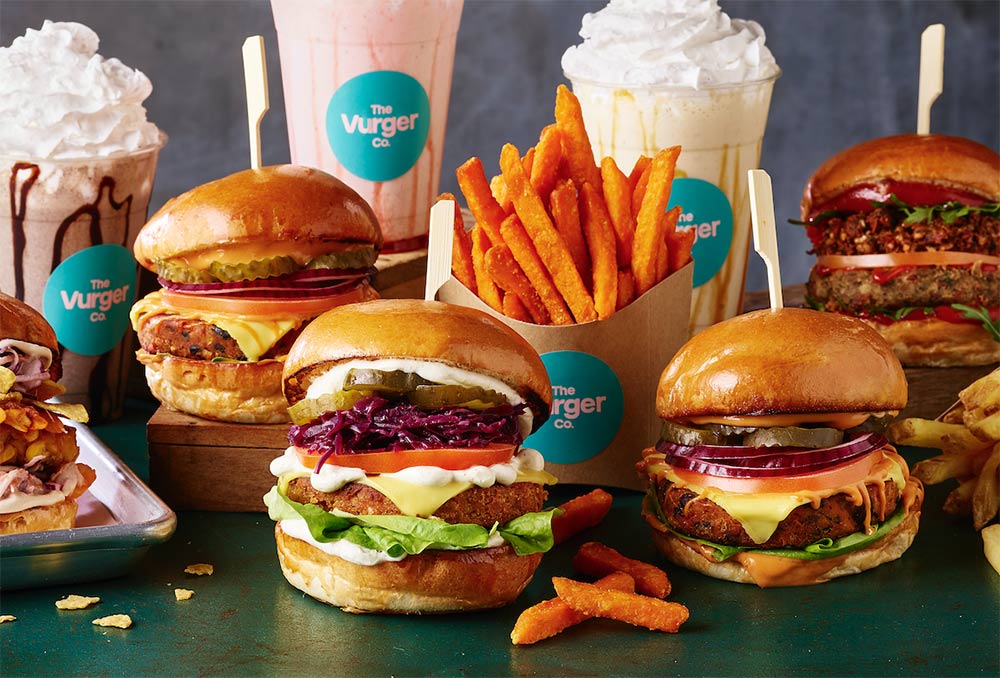 The Auburger at The Vurger Co.

The Vurger Co. started as a market stall, popping up across London before settling down in Shoreditch and then opening a second site in Canary Wharf. They have a fully vegan menu and several burgers to choose from. Top of the list is the Auburger - that's Aubergine, chickpea, red onion and chipotle patty with pickled red cabbage, gherkins, tomato, vegan cheese and house cumin mayo. Look out for their wraps and salads too as well as their Buffalo “chicken” vurger.

Sides: Choose between skin-on or sweet potato fries as well as tater tots.

DIY Kits: Order on their shop

More about The Vurger Co. 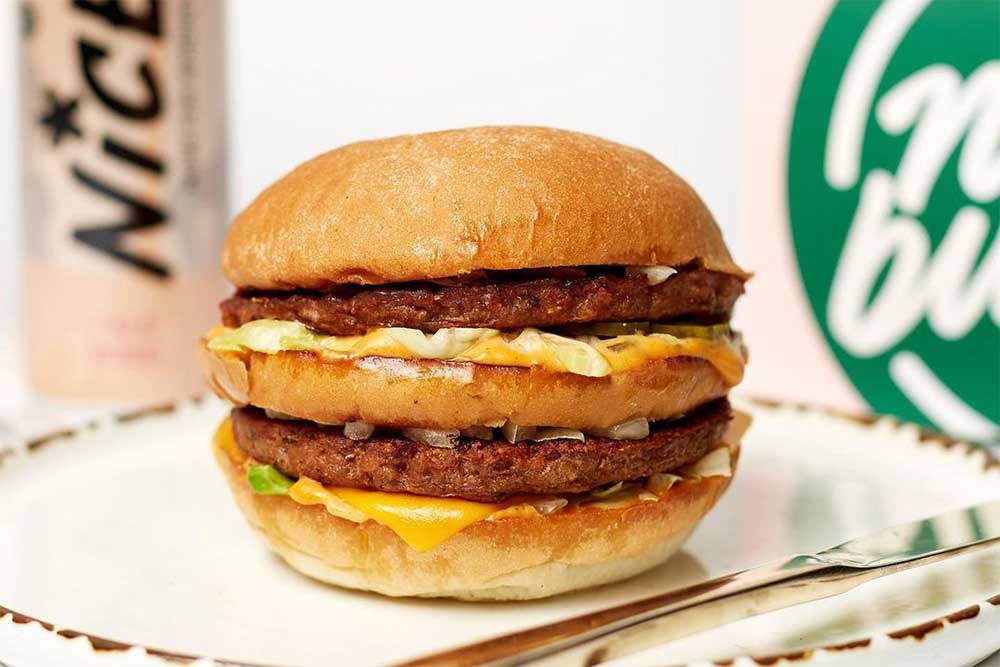 The Big Stack at Neat Burger

Renowned vegan Lewis Hamilton has a side business in addition to his racing - Neat Burger, a vegan burger joint in Mayfair. Their patties are by Beyond Meat and the main Neat Burger is a Double Neat Meat Patty, Triple bun, Lettuce, Tomato, Grilled Red Onions, Pickles and Tangy Sauce - with cheeseburgers, hot dogs and Chick'n burgers all on the menu too. 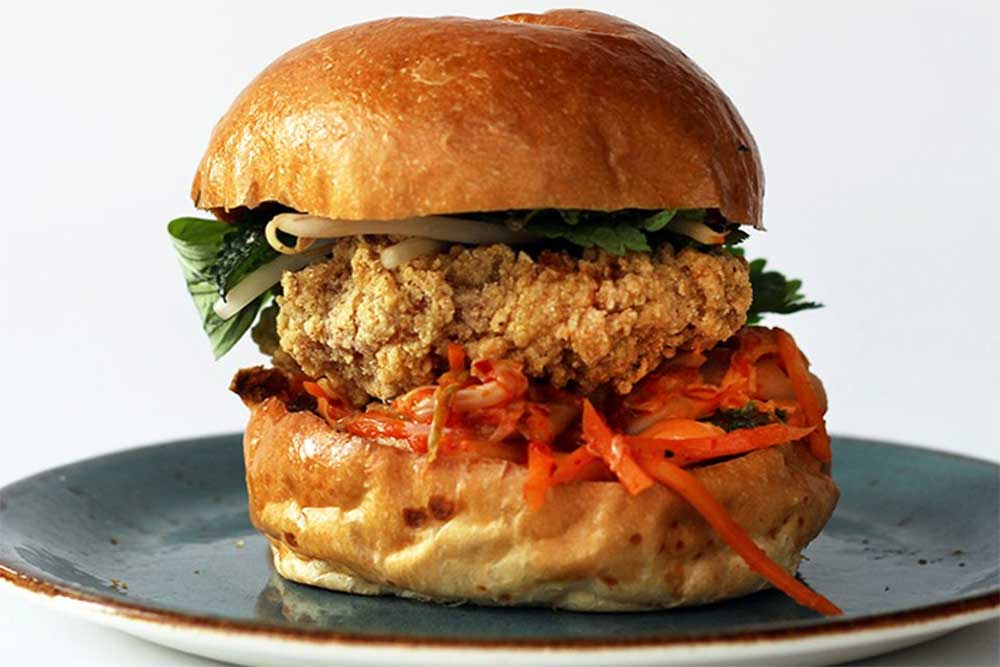 Mildreds has been offering interesting, delicious vegetarian and vegan food for 30 years so they know how to make a tasty burger. From their two chick'n options this Korean burger is the business, featuring southern fried chick’n, house kimchi, fragrant herb and shoot mix, gochujang mayo and Korean fried chick’n sauce.

Sides: It would be rude not to try their small plates, each location offers something slightly different  - dishes like chargrilled aubergine, rose harissa, preserved lemon & basil oil, or smashed avocado, lime and chilli with organic corn chips. Temple boasts a fully vegan menu, using the meat alternative seitan, a similar consistency to chicken and made from wheat. Oh, and deep-fried in crispy goodness. Based in both Camden and in Hackney with street pop-ups across London, these chaps offer a crispy Seitan fillet, ranch mayo, bacon, cheese, lettuce and pickles – great for vegetarians who miss meat.

Sides: They would probably win the award for most Instagramable Mac and Cheese pot.

Delivery: Order via their site

More about Temple of Seitan 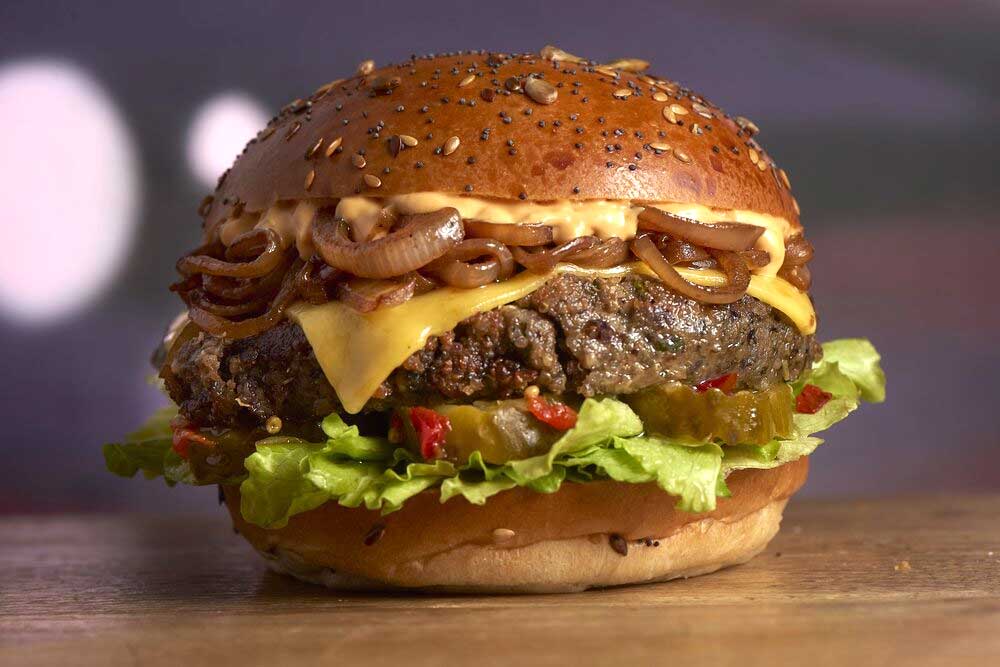 What's UR Beef at Mooshies

One of the first vegan burger bars in London, Mooshies has a dedicated following. As well as their jackfruit jerk burgers and the aubergine Fillet-om-Fish, there's the What's Ur Beef - organic quinoa and black bean, Mooshies burger sauce, caramelised onions, vegan cheese, gherkins and lettuce. And you can add avocado and aubergine on that too, if you fancy.

Sides: Their loaded fries, topped with everything from fried aubergine to BBQ jackfruit. 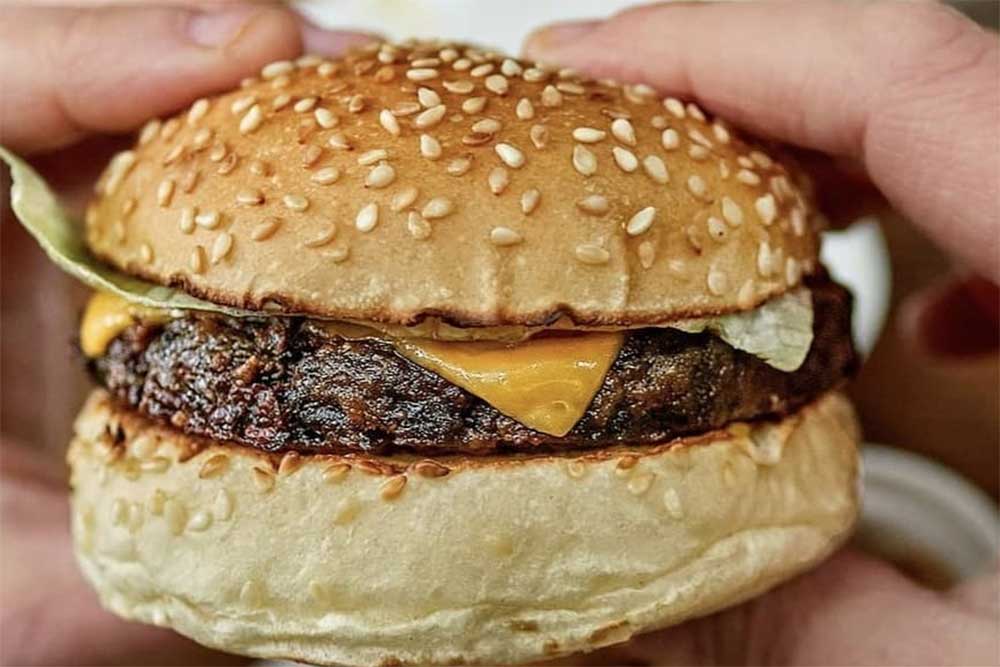 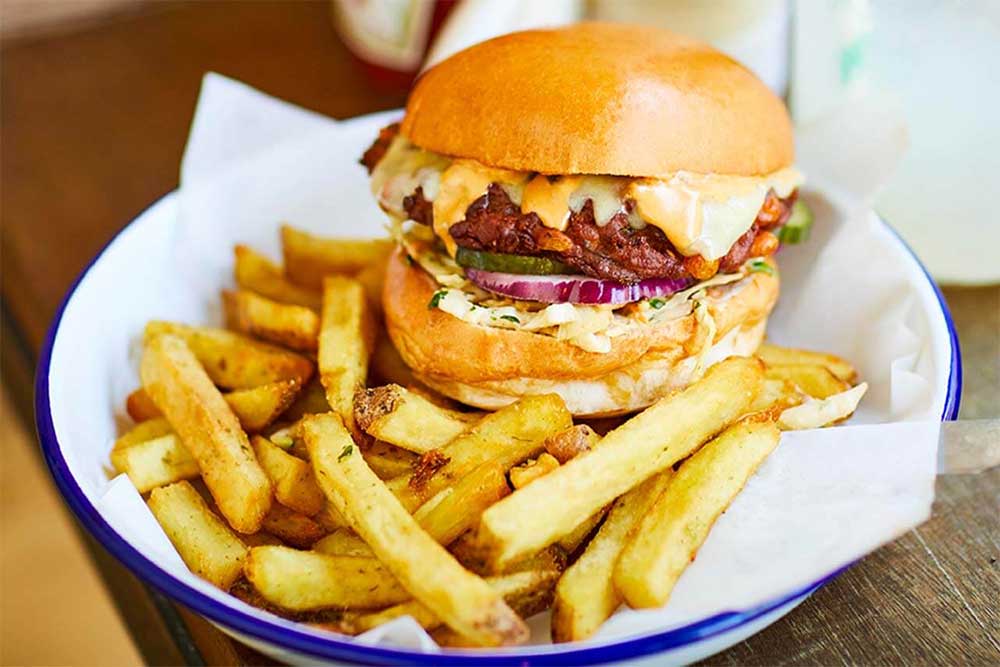 Delivery; see all the options here 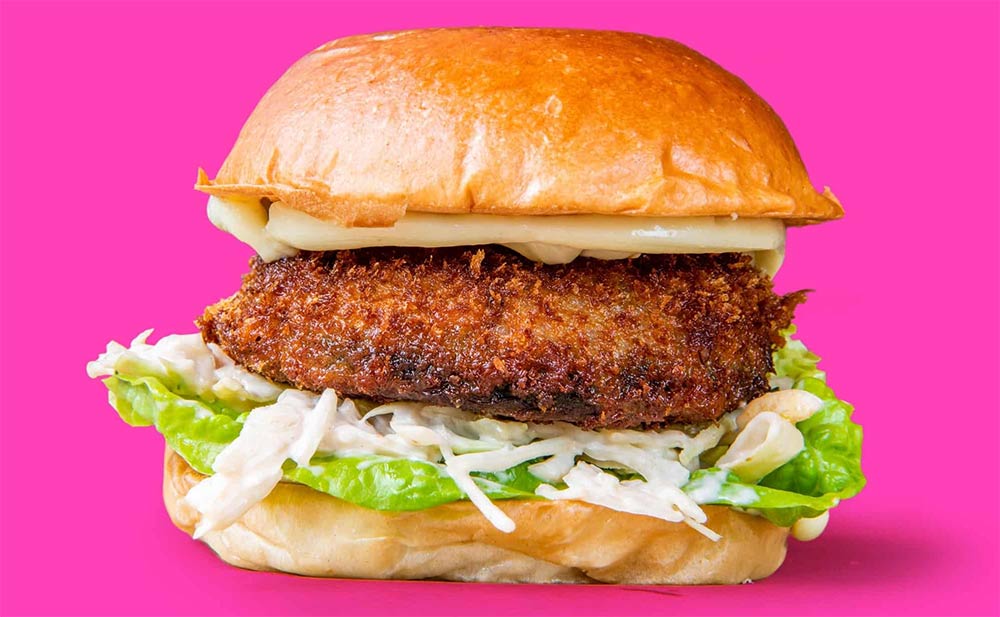 With 13 locations including one in Brighton, Patty and Bun serve up a mean Field Mushroom Fritter – with garlic parsley butter, cheese sauce, coleslaw, lettuce, tarragon mayo in a brioche. Gluten-free buns are also on the menu, and burgers are available to take away too if you don’t want to sit in. There are also three plant-based options too.

Sides: Vegan Brisket Loaded Chips? Don't mind if I do. 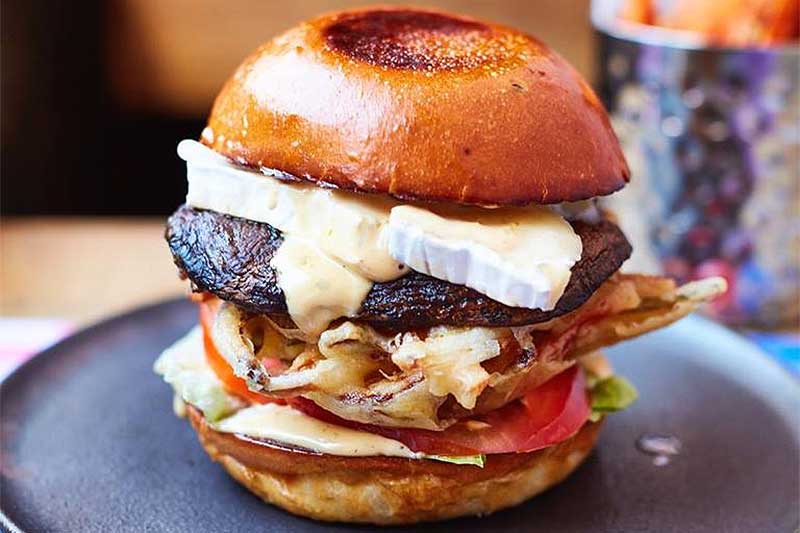 Open until 2am on the weekends and spread across three floors, this Japanese udon/sushi/burger joint is as kitsch as it comes. Executive chef Brendan Fong pays homage to the vegetarian ‘Dude Food’ movement with a tempura vegetable patty, miso-braised mushroom, lettuce and tomato with yuzu kosho aioli (with the option of added Brie for £1.00).

Sides: It's got to be the mizuna and enoki mushroom salad. 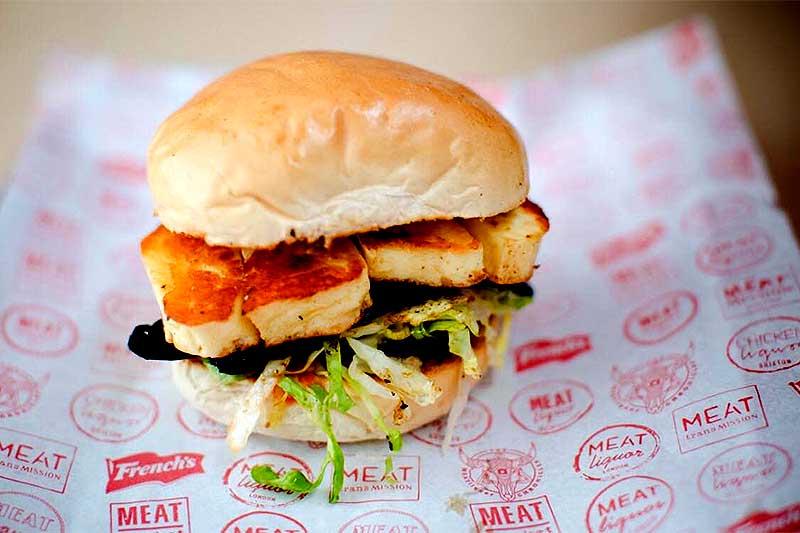 This once meat-heavy chain now offers up to four vegetarian options (branch dependant). Known for having a seriously fun cocktail list, it is famous for having a selection of drinks with names like “The Paralyser” where diners are limited to a maximum of two. We opt for the Halloumi & 'shrooms Burger - stacked with halloumi, mushroom, red onions, pickles, lettuce, French mustard and ketchup.

Sides: It’s fries all the way here with eight different varieties, including fries covered in green chilli sauce, melted cheddar cheese & pickled jalapeños – worth it even if you do have to drink a whole bottle of Gaviscon the next day. 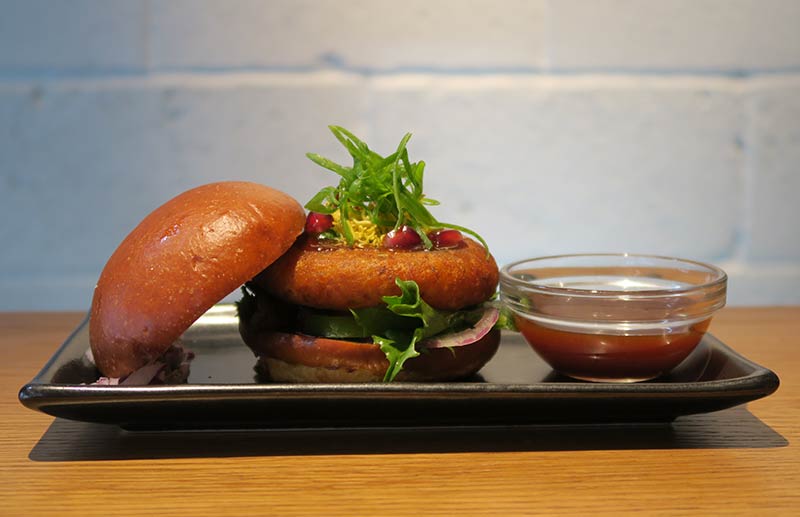 Inspired by Indian street food, Roti Chai offers a moreish selection of small plates including the Bun Tikki -  a mini Amritsar style aloo tikki burger. But don’t stop there – the plates are small, so team it with the Aloo Papri Chaat (crunchy wheat crisps, potato, chickpeas, yoghurt) or the Hakka Chilli Paneer.

Sides: Go for a warming bowl of Tarka Dhal

Then check out our guide to the Best Vegetarian Restaurants in London.