London's vegan scene is a hotbed of creativity and invention, but sometimes it's a little hard to work out what's really worthy of your attention in all the noise. For Veganuary - but just as useful for the rest of the year - we've compiled an uber edit of plant-based restaurants that have particular specialities... 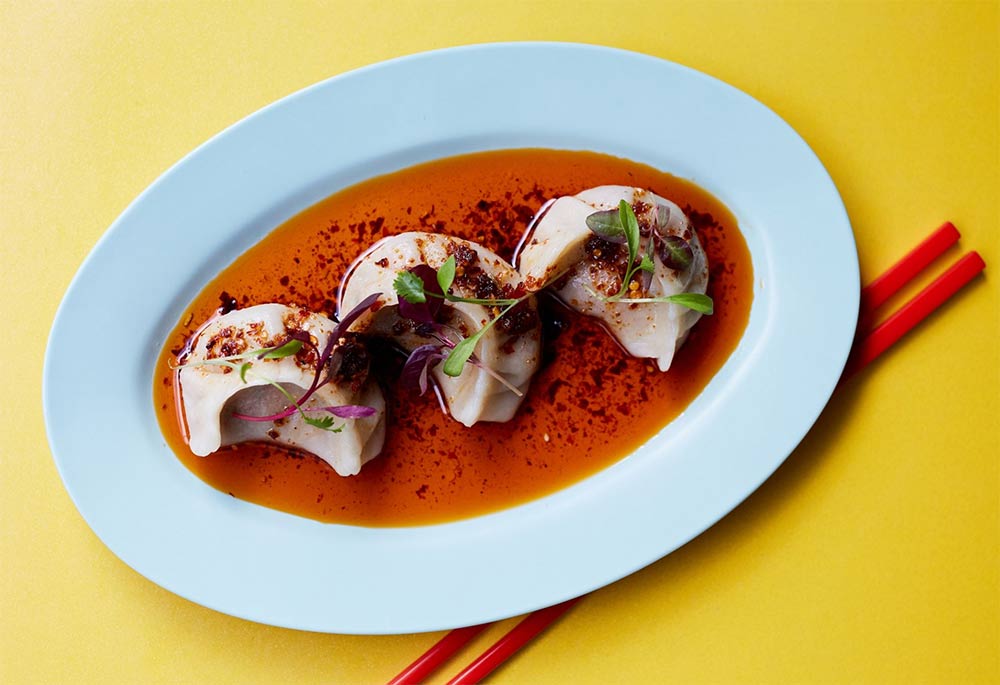 Take a Californian-born chef that trained in New York and transplant him to London and you get Mao Chow - a vegan Chinese restaurant that believes in great tasting food. The fact that it's vegan is an added bonus. Depending on which branch you're at, their 'meaty' veg dumplings and ominpork variety come with chilli oil and zhong sauce. 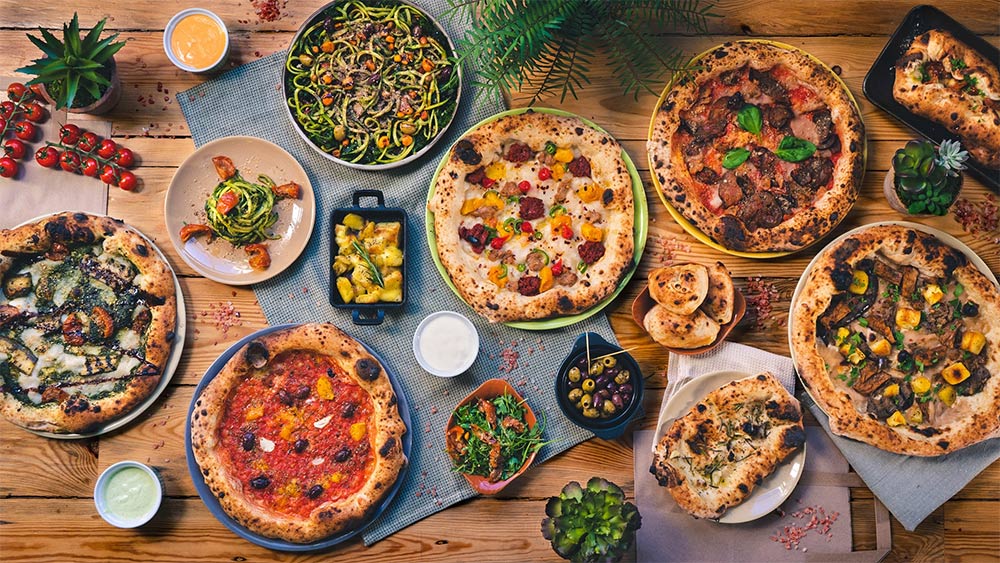 As the UK's first vegan pizza slingers, Purezza were groundbreaking and they try hard to keep that edge. Choose from wholegrain, hemp, or Freedom (gluten-free) bases with organic toppings and there's even a chocolate pizza for dessert made with their own sunflower seed chocolate spread.

See also: Flat Earth in Hackney is mainly vegetarian but has a strong vegan offering. They champion local ingredients and use 100% organic heritage grain flour in their pizzas. 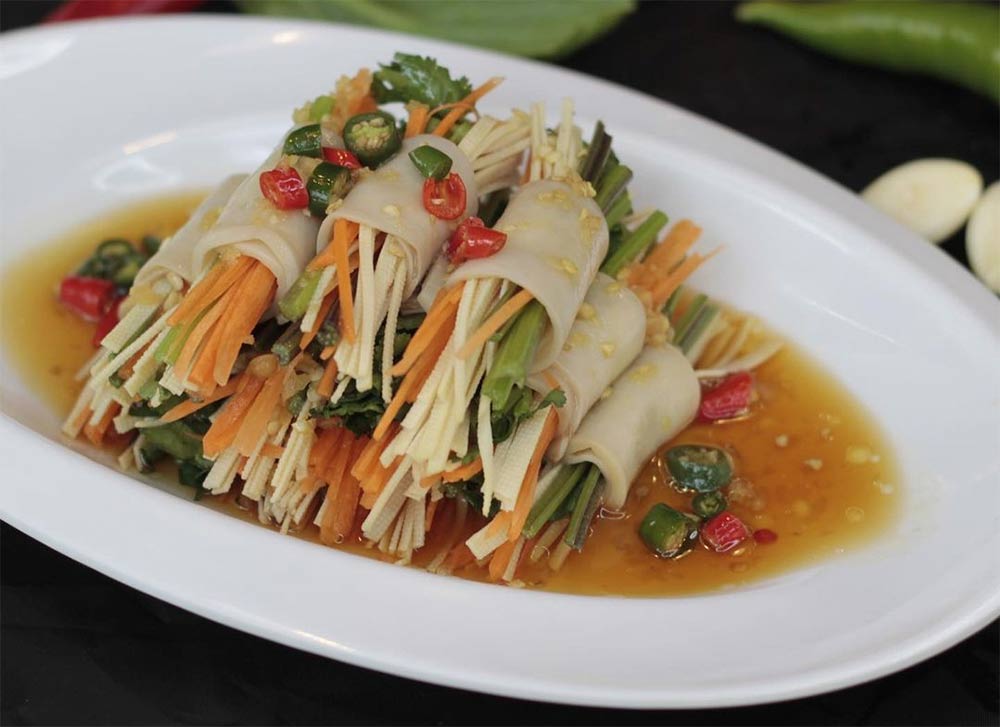 Backed by Zhang Chao of Xi’an Impression, this Islington vegan spot was an instant hit when it opened. Jay Rayner loved their cloud ear mushroom salad so much he called it "the edible equivalent of cold-water swimming...It makes you feel more alive, which is a serious achievement for a bowl of mushrooms." With three chefs in the kitchen who originate from different regions in China you can expect a thrilling tour of the county's plant-based dishes.

See also: Anise in Camden has an extensive vegan menu and a good reputation for its takeaway. 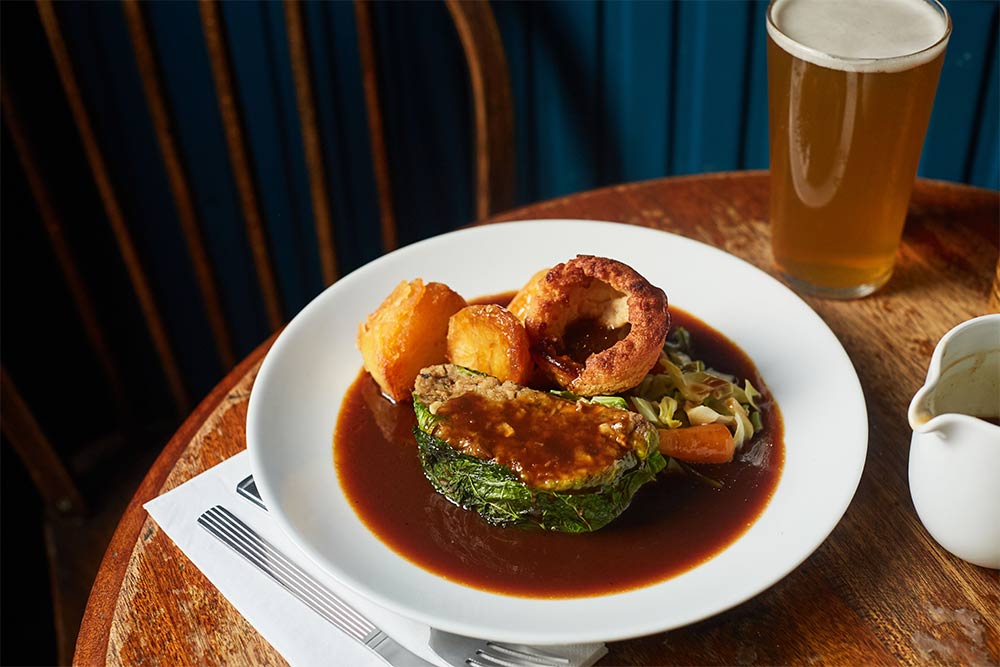 It might be one of Hackney's oldest pubs, with an inn on this site since the 1700s, but The Spread Eagle became firmly part of London's future when it opened as the city's first fully vegan pub in 2018. As you might imagine, they took pains to get their Sunday lunch offering right. Their current menu includes a Beet Wellington, walnut and cashew nut roast and a pot roast celeriac with potato crackling.

More about The Spread Eagle 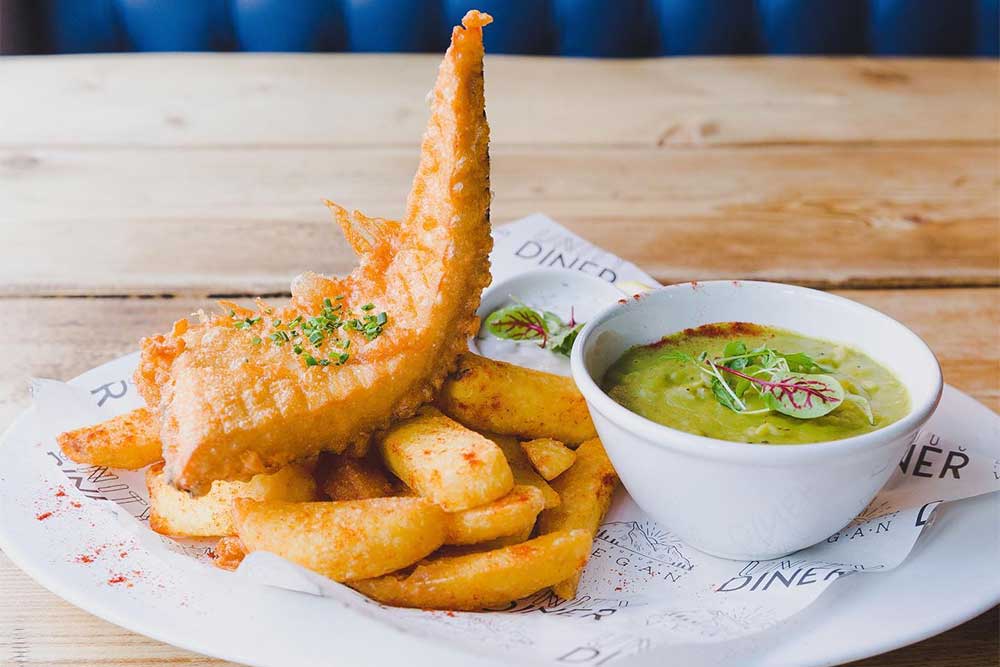 When one of your founders is none other than Earthling Ed you know that animal rights will be at the forefront here. Founded in 2018, the non-profit diner has its own animal sanctuary and aims to serve up great vegan food in a sustainable environment. If that all sounds way too worthy, the good news is that the food lives up to the ethics with amazing tofish and chips definitely worth ordering along with lobster mushroom rolls.

See also: Sutton and Sons have a separate vegan menu and use banana blossom for their vegan fish and chips where even the curry sauce is plant-based. 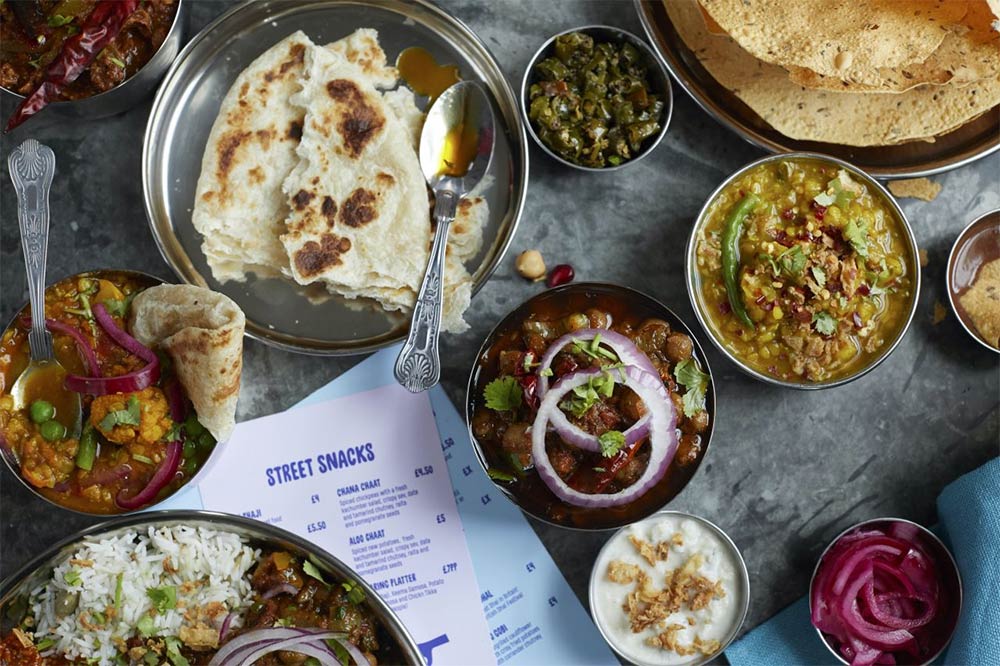 Grace Regan's vegan curry house went down a bomb when it first opened in Walthamstow, leading to a book deal and a second restaurant in nearby Leytonstone with a third being crowdfunded right now. The tiffin club whereby members get their takeaways in reusable metal tiffin tins is a sign of their commitment to sustainability. Look out for their weekend brunches too, featuring Bombay hash, Indian guac and sweetcorn puda.

See also: Tendril is popping up at The Sun & 13 Cantons at the time of writing with a fully (and sometimes "mostly") plant-based menu, but Rishim Sachdeva is planning a permanent restaurant soon. 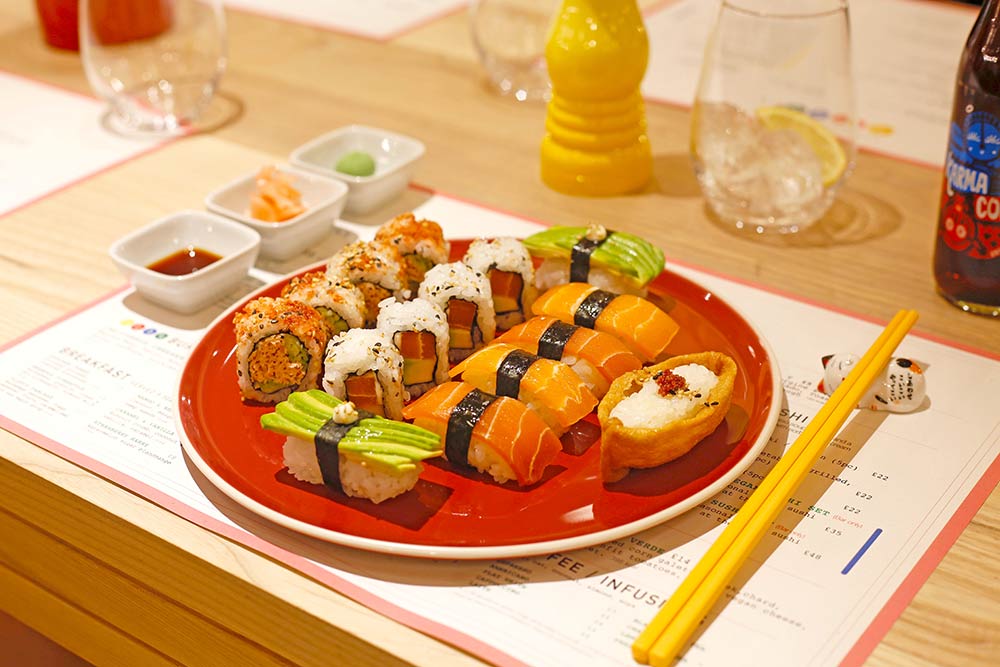 Chef Alexis Gauthier is the brains behind this in-store restaurant where Princess Beatrice is among the fans of his vegan sushi counter. There are sushi sets and tasting menus available with chef Tes Ryu (ex Mei Ume) running the counter. The dragon roll made using banana blossom tempura is particularly popular. 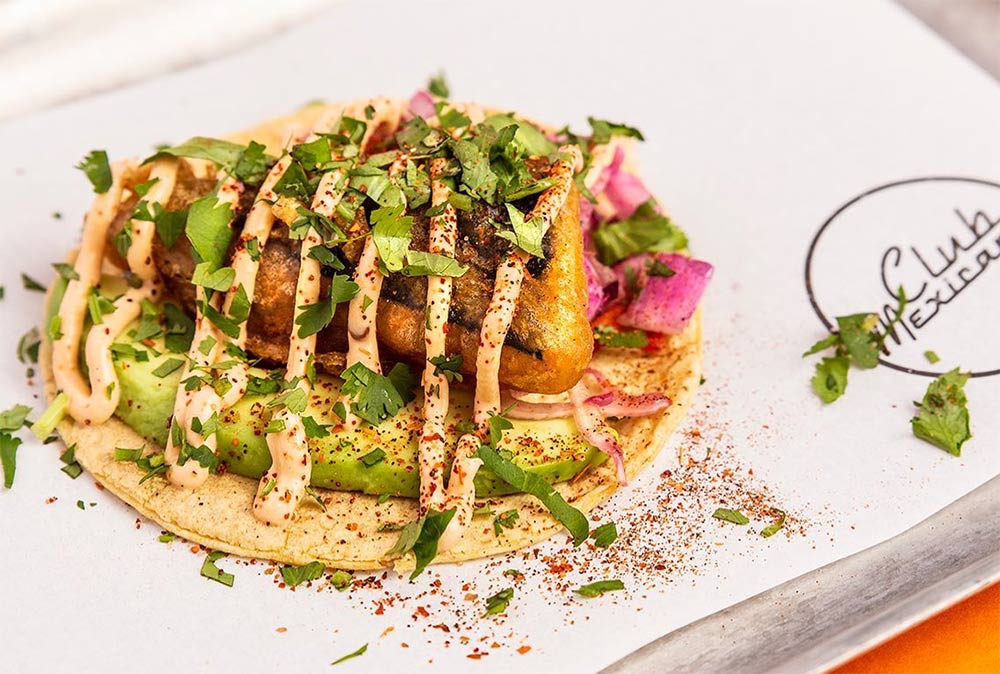 From street market to standalone restaurant, the past few years have been a whirlwind of activity from Club Mexican and founder Meriel Armitage's Mexican-Californian inspired dishes. 100% the dish to go for is their signature Al Pastor taco featuring house-made seitan on the shawarma grill with charred pineapple. They also do a mean Margarita. 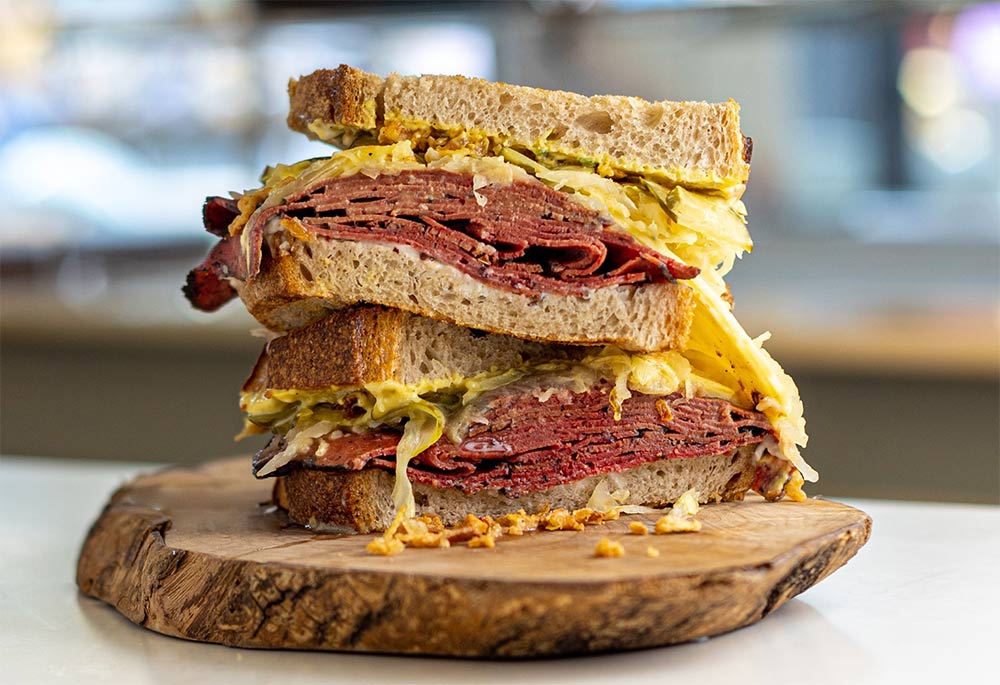 Rudy's corner site in Islington has been through many iterations, but it seems this vegan diner might be the one to make a success of this spot. Situated right next door to its vegan 'butcher' the American-style diner serves up a great Rubenz sandwich using seitan pastrami on fresh rye bread and its dairy-free freakshakes are also incredibly popular. 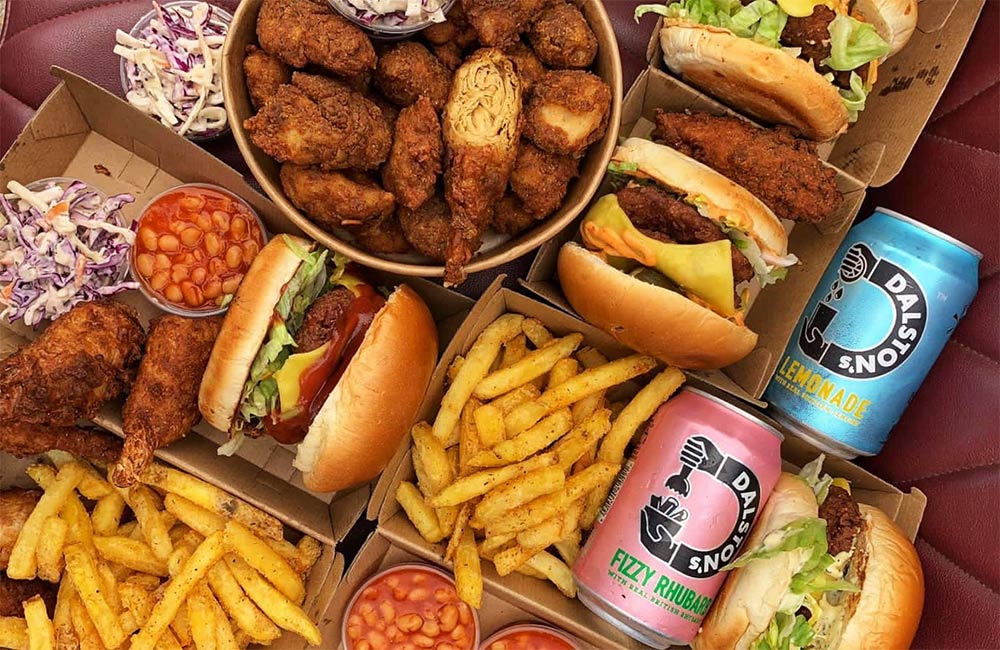 Chickenish's aim is to recreate "chicken shop classics" in vegan form using a plant-based recipe and frying it all in a chickpea flour batter (so it's gluten-free too). There are buckets, burgers, drumsticks, popcorn "chicken" and more on the menu, not to mention vegan coleslaw, beans and gravy.

See also: Temple of Seitan's burgers, wraps and more are also the business when it comes to a vegan fried chicken experience. 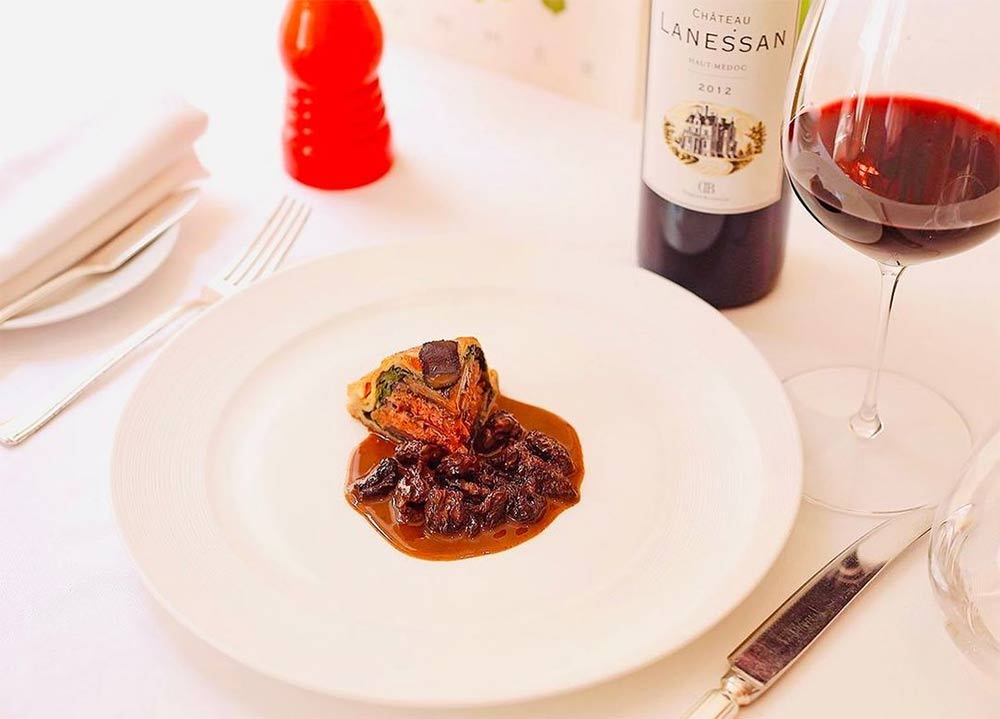 Classically trained French chef Alexis caused quite the stir when he turned his Michelin-starred Soho establishment into a fully vegan restaurant in 2021. Here you'll find faux gras and vegan caviar on the menu. The multi-course tasting menu costs £75 and currently kicks off with Wintergreen chard and chervil barbajuan served with kumquat and avocado tart.

See also: Pied a Terre is another fine-dining spot that pays much more than lip service to its vegan tasting menu offering and also does amazing vegan feast deliveries too..

And lots of burgers

There are so many great vegan burgers in London, so we've rounded them all up (plus some vegetarian burgers) here:

The best veggie and vegan burgers being delivered in London

For the times when you want a delivery driver dropping off a towering plant-based burger to your door - we've got you covered. ...
Read more