From steak powerhouses like Hawksmoor and Goodman to "steak for a tenner" spots like Flat Iron, there's a huge choice of steakhouses in London. So we've picked some of the restaurants that we think are serving up some of the best steak in town. 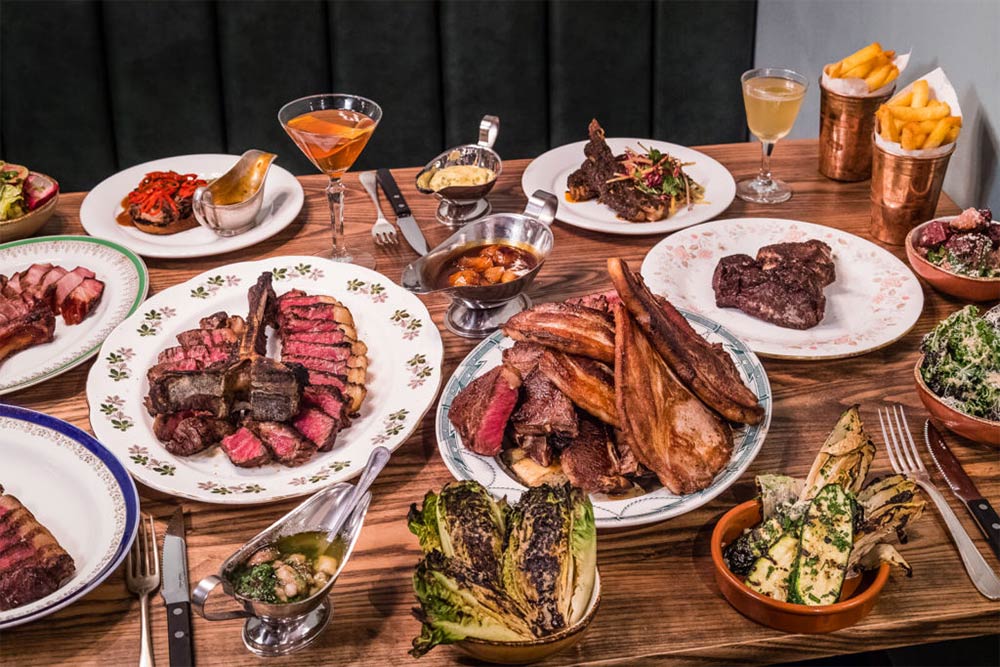 Soho, Shoreditch and The City

Blacklock is a chops restaurant first and a very affordable one at that. The skinny chops piled on bread is the order of the day here, but you can also have some bigger bone-in cuts. They include prime rib, sirloin and porterhouse - and the rump cap is worth a look too. Wash it down with all the cocktails for a fiver.

Preferred steak side: The 10-hour ash-roasted sweet potato is a must 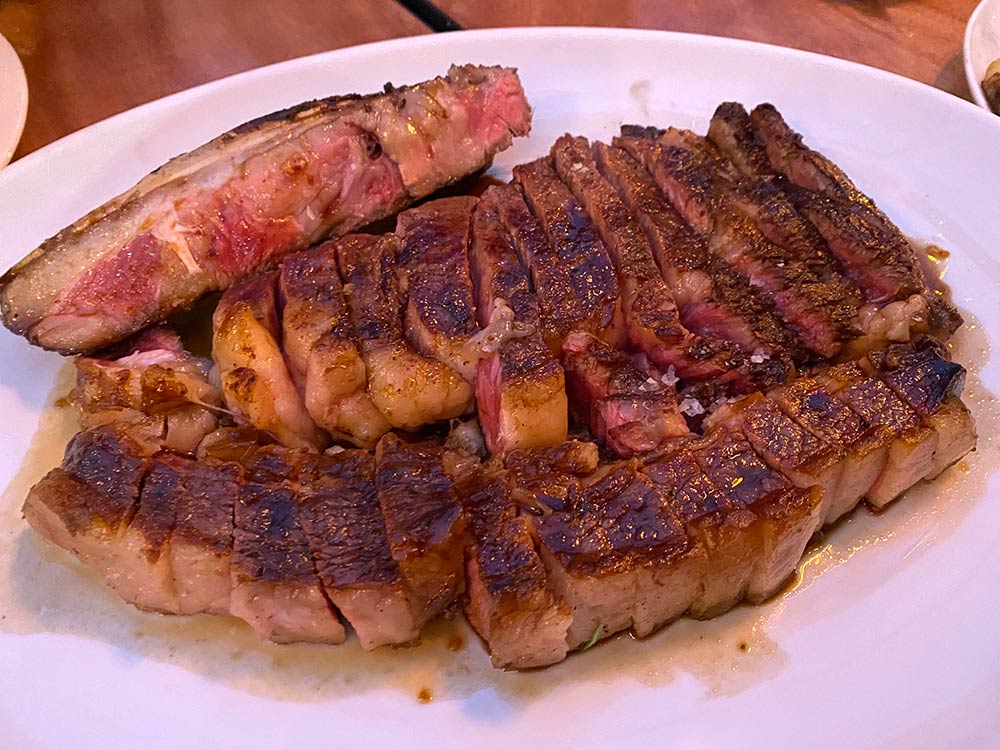 Tomos Parry's Shoreditch Brat was an instant hit in Shoreditch. The restaurant has a Basque accent and from a steak perspective, the Galician whole beef sirloin or rib is where it's at - easily one of London's best beef cuts (the turbot is a bit of a must-have too). They've followed this up with a semi-alfresco second Brat at Climpson's Arch.

Preferred steak side: The smoked potatoes are divine. 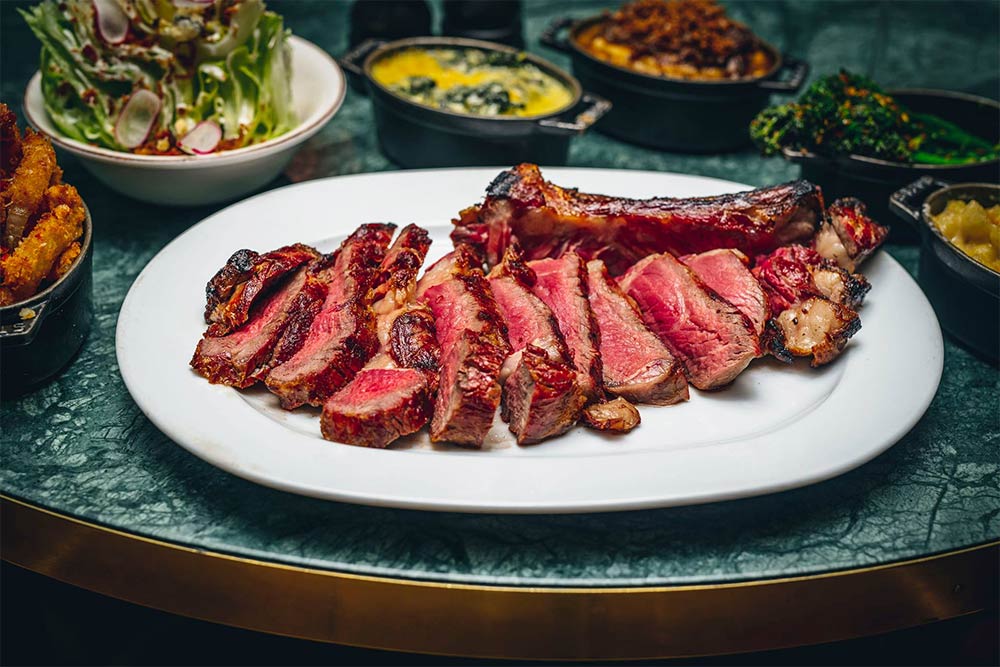 The Coal Shed made a name for themselves in Brighton and have managed to transfer that success to their London outpost. There are plenty of steak cuts on the menu (and the specials board) but also a pretty good fish selection too.

Preferred steak side: Go for the short-rib mac n cheese 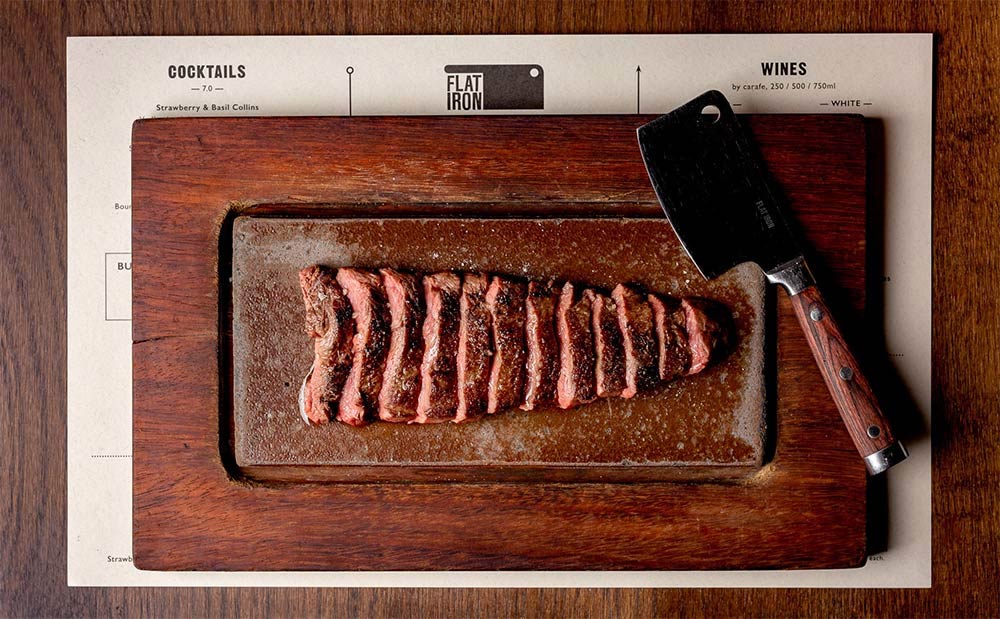 Flat Iron have broadly been responsible for making the steak dinner available to all with their steak for £12 - only a couple of quid more than they launched with many years ago. The titular flat iron steak is the main event here, but there are always special cuts to look out for on the menu.

Preferred steak side: The dripping cooked chips and the roasted aubergine 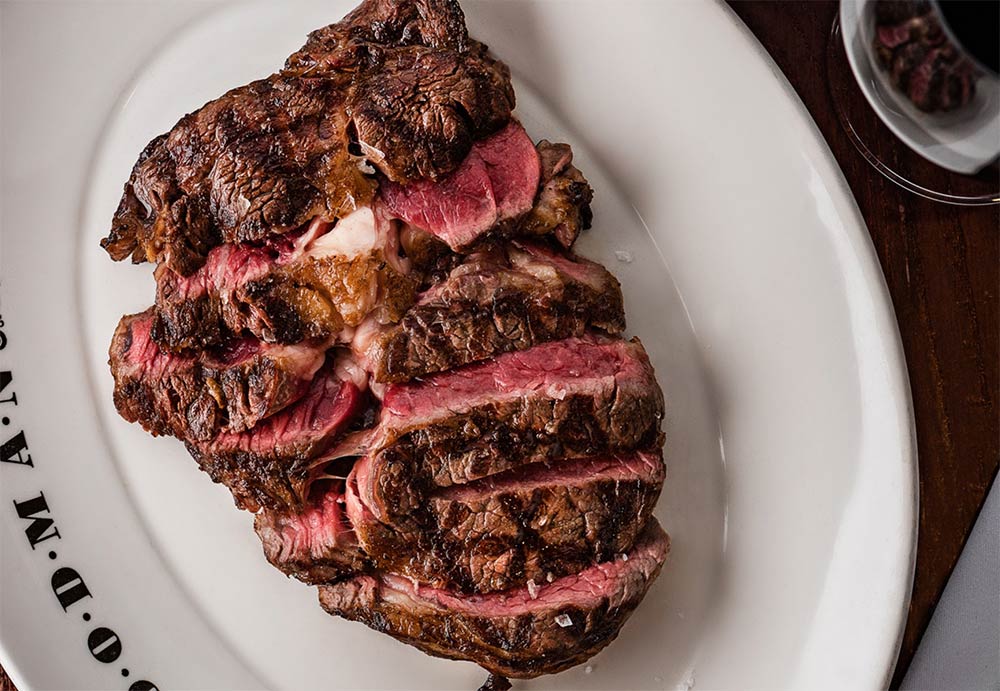 Goodman are also behind Burger & Lobster and Zelman Meats, but this is really their flagship brand. A serious steakhouse with well-sourced meat aged in-house (if you're really into it, ask to see inside their meat fridge) and a huge variety of cuts. The Goodman burger is well worth a look too. 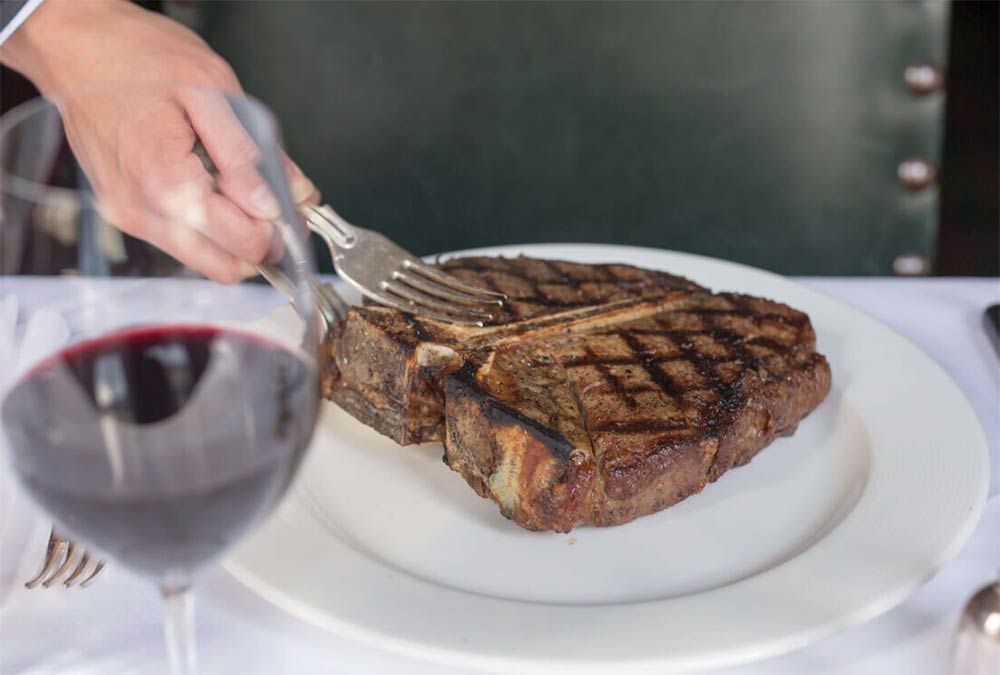 One of the oldest restaurants on the list, there's actually been an inn on the site of The Guinea Grill since 1423, while the Guinea Grill itself has been here since 1952. You'll find the main restaurant at the back of the pub where you can expect to be cosseted. This place found a new lease of life when legendary landlord Oisin Rogers took over. Expect the usual cuts via top Highbury Butcher Frank Godfrey, who has a dry ageing room dedicated to The Guinea.

Preferred steak side: The chips fried in beef dripping or gratin potatoes. Or, frankly, one of their pies. 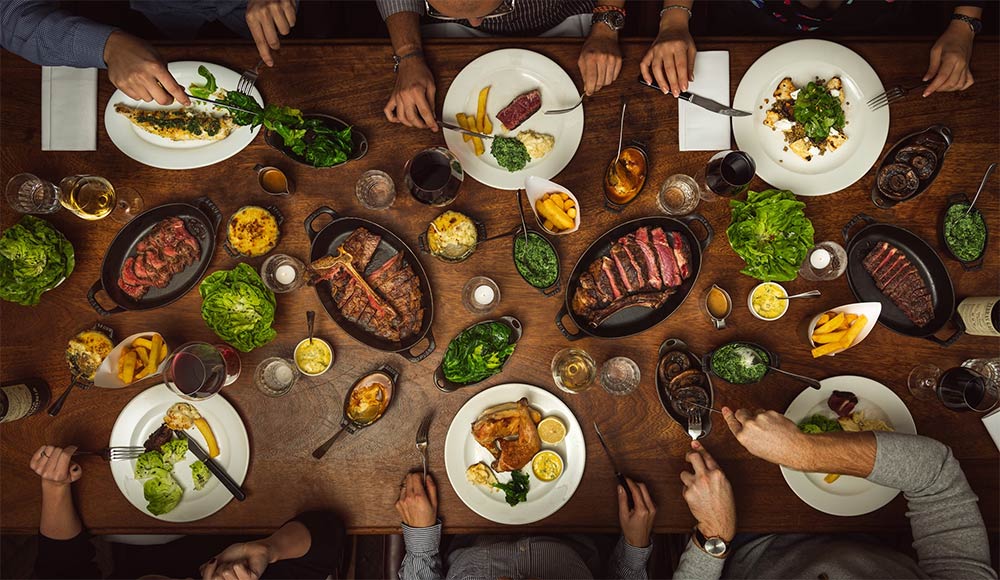 This is one of the big steak success stories in London, and probably the group that most people have heard of. Certainly when we've ever talked about steak restaurants with friends, Hawksmoor always comes up. They've managed to make the steakhouse considerably less fussy than it was before, a template that's been taken up far and wide. And there's a lot more to Hawksmoor - the bars are worth a visit on their own with a great cocktail list, and you will want to leave room for their sticky toffee pudding.

Preferred steak side: So, so many to choose from. Although the mash and Tunworth (with a slab of melted Tunworth cheese at the centre) takes some beating. 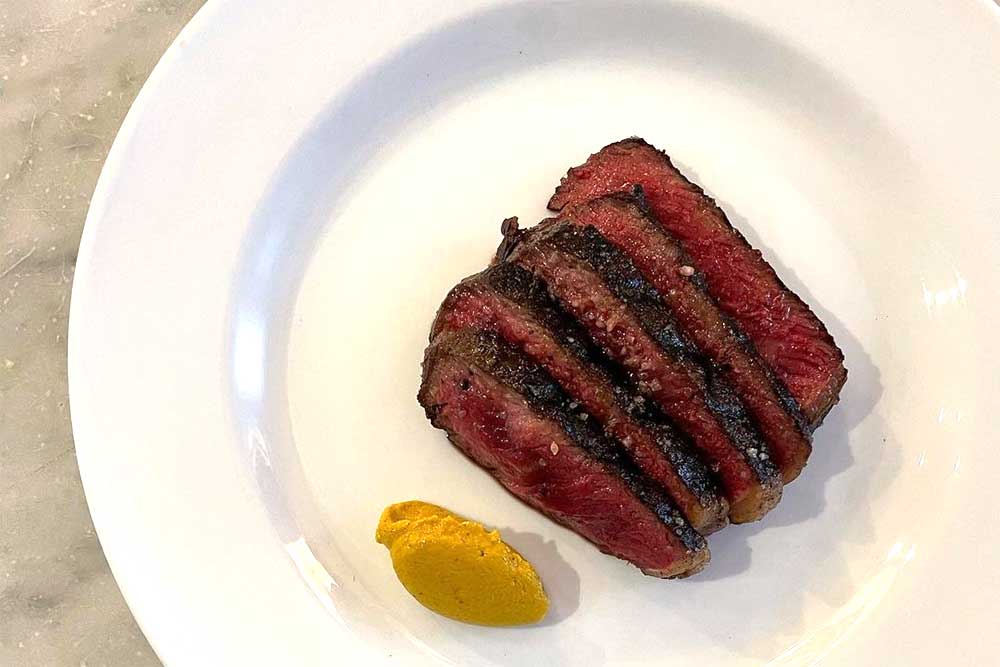 By day a butchers on Broadway Market, at night this spot transforms into a neighbourhood restaurant. All the meat here comes from British farmers who practice sustainable farming. The menu changes daily but there'll usually be around three cuts of steak alongside chops and more.

Preferred steak side: Burnt onions or leeks if they're on, along with potatoes in whatever form they're coming in. 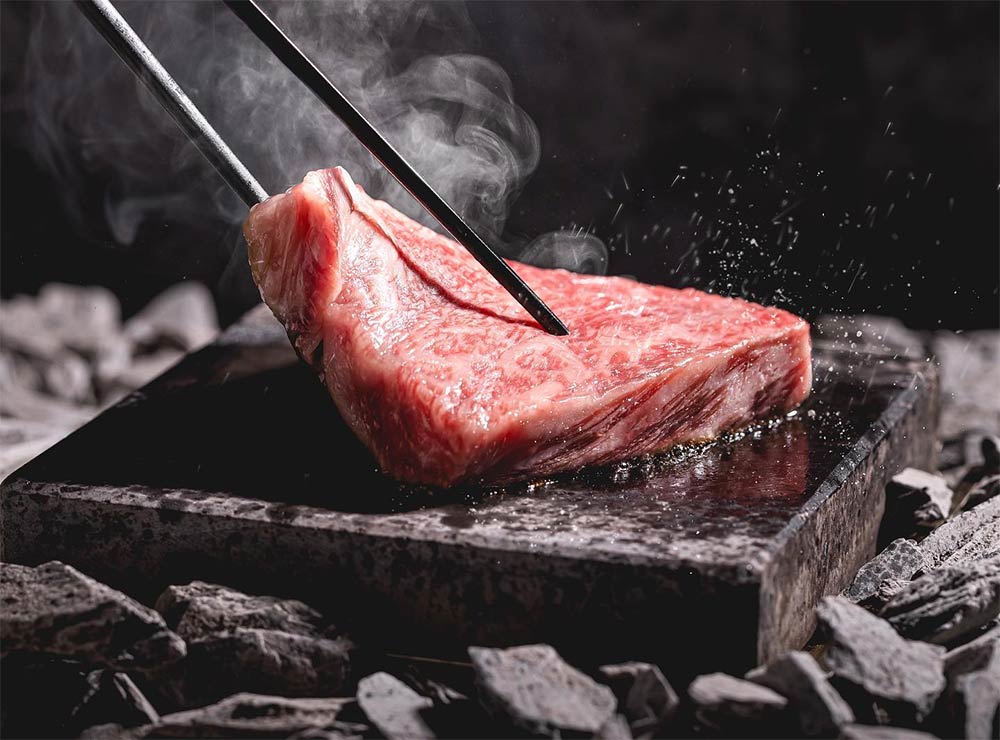 As the name gives away, there's a bit of a DIY element to the steaks at Hot Stone, where you cook them using "searing-hot stones crafted out of volcanic rock". Choose your steak - cuts include Australian and Japanese wagyu as well as Kobe sirloin and then cook it yourself (with handy instructions) on the hot stone at your table. Simpler than it sounds - and with great results.

Preferred steak side: Steamed rice or spinach with sesame dressing 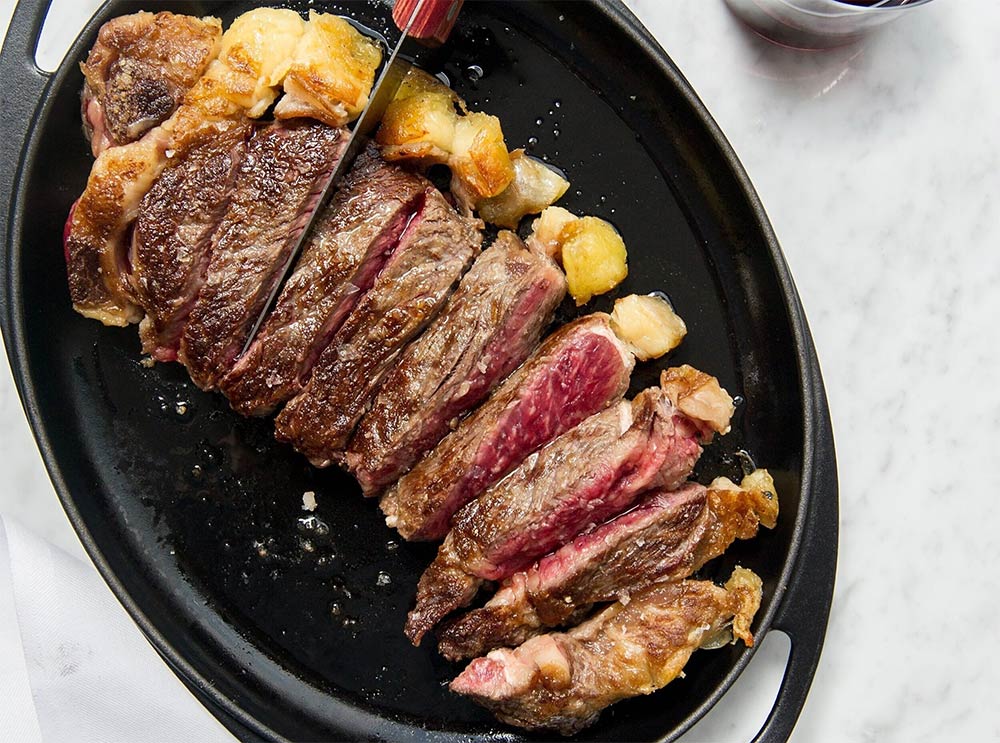 Lurra is a Basque restaurant from the same people as Donostia and, being Basque, Galician beef is a big draw here. You'll see these enormous cuts on display, and they're pretty damned big - served at 800g to share. Before that, you'll want to roam through the tapas plates - and the sourdough with bone marrow can't be missed.

Preferred steak side: The fries with smoked paprika and alioli are outstanding. 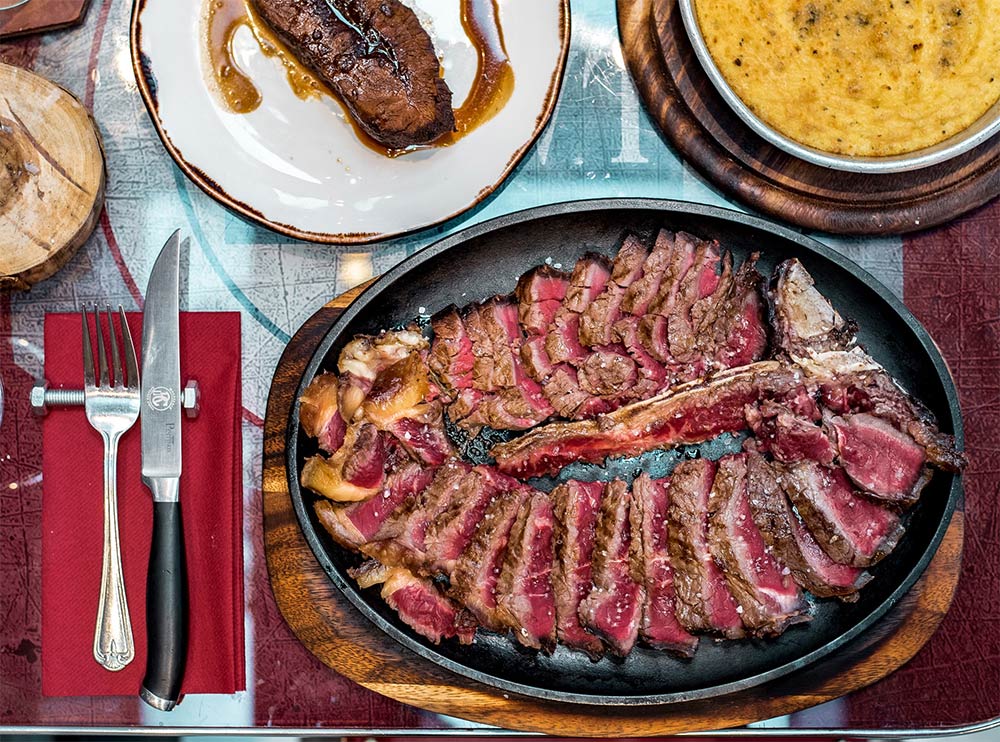 Macellaio RC is an Italian grill restaurant with a particular focus on steak - the dry-aged steak from the Fassona breed is the backbone of their menu. There's a strong focus on the butchery element too, with the meat front and centre at all restaurants (they call them "butcheries with tables").

Preferred steak side: You might want some roast potatoes with that, though the fennel with orange is quite unique. 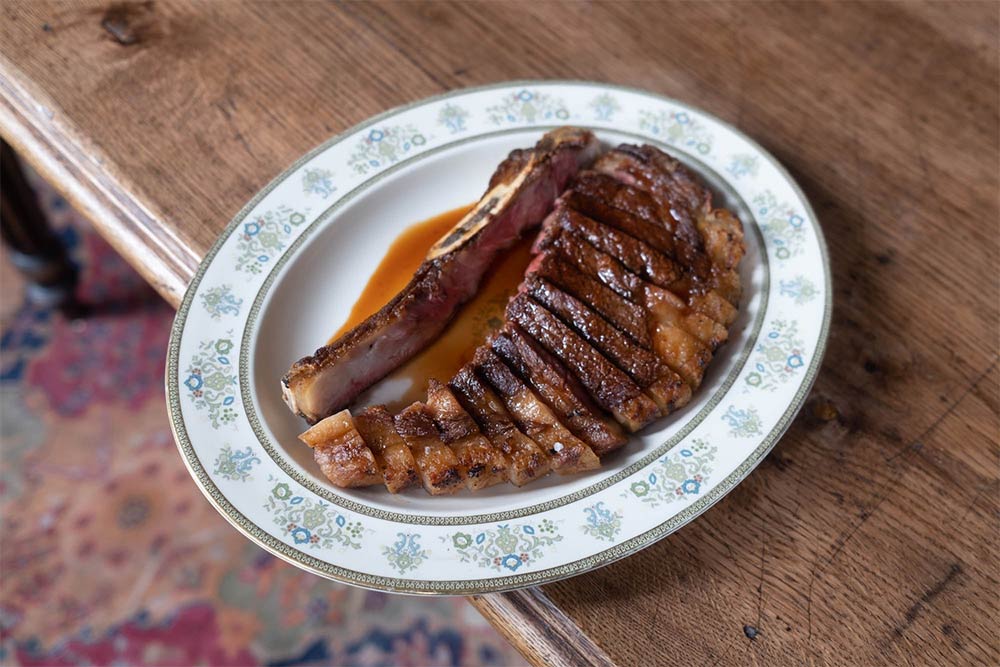 While there's a lot more to the menu, with the word "chop" in their name, there's still a definite focus on meat at Quality Chop House. There's always a steak section on the menu and at the time of writing, the star of the show is the Hereford bone-in ribeye - available in sizes up to 1.2kg.

Preferred steak side: No question - it has to be the confit potatoes, possibly London's greatest side

Cut at 45 Park Lane (Mayfair) - The UK home for US chef Wolfgang Puck, the steak is all about USDA Prime Beef here.

M Restaurants (City, Victoria) - billed as a "Modern international grill", the cuts here are from the UK, Argentinia and America, with a kobe and wagyu section too.

Sagardi - if you're looking for a great Spanish steak, then you can't go wrong here.

Smith & Wollensky (Strand) - Another US import, this "classic American steakhouse" features a huge range of steaks, including USDA prime.

STK: This is the party version of a steakhouse.

Zelman Meats - A more affordable steakhouse, the Soho original has gone, but Zelman continues on the 5th floor of Harvey Nichols.