It's that time of year again, when you can play puntastic bingo (let's see how many times the word "spooktacular" is used this year), fancy dress is an acceptable thing to have as a dress code for an event and restaurants all get a little ghoulish with their specials. So with that in mind, we've rounded up some of the best specials you'll be able to grab as Halloween approaches (with many available for delivery this year) and a few ideas for a night out too...

Special dishes - to eat in or out 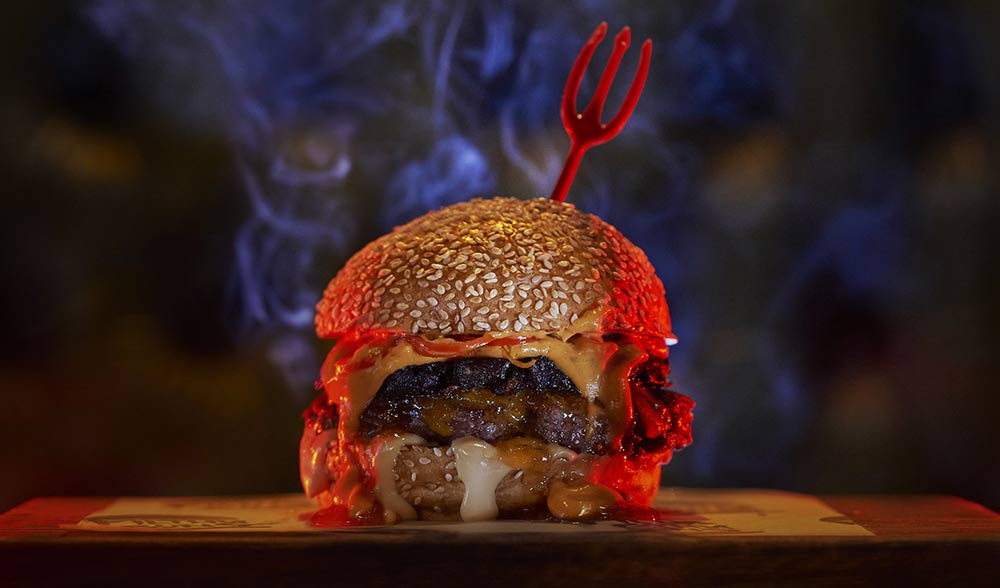 The Beelzebun at Filthy Buns

This special burger is a 35-day, dry-aged beef patty from The Ginger Pig topped with their house black pudding, Red Leicester, Golden Habanero Jam, Reaper Sauce ("a hybrid of the recent wrist slap burger sauce just made a bit naughtier with the help of some ghost chillies"), sour chillies, and Filthy Buns signature smoky gravy mayo. And there's a vegen version too!

When: Available until 15 November 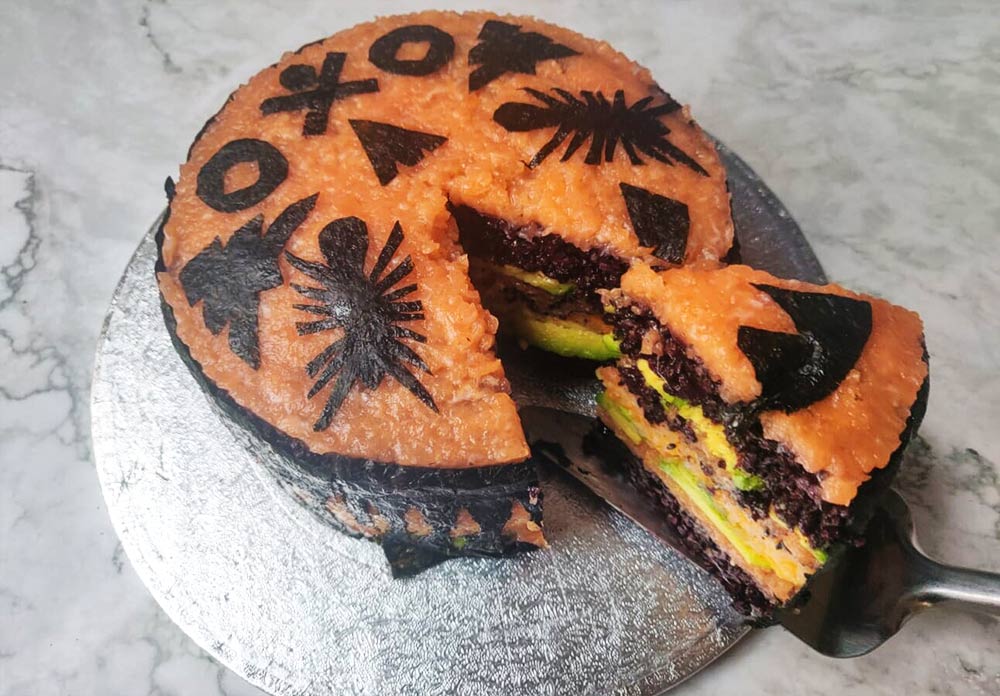 This savoury cake is hand-ade with layers of  “forbidden” wild black rice (so called because, in China, only ‘special’ people could eat it), as well as ground salmon, avocado, black sesame, orange tangy rice (coloured with carrot) and decorated with spooky silhouettes and wrapped in a band of perforated nori.

When: Available until 31 October 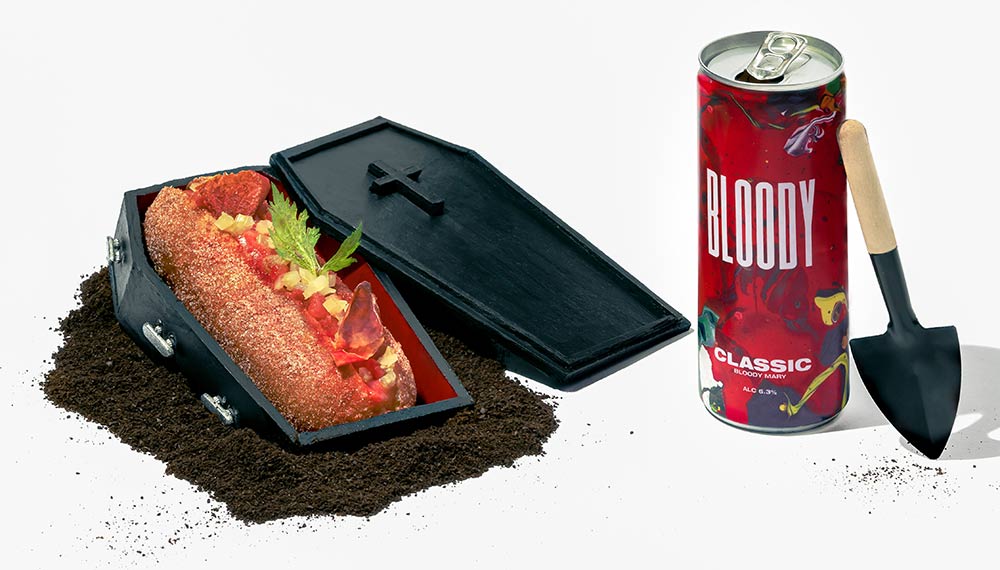 When: Available until 1 November

Where: Coal Drops Yard and Wembley BOXPARK (and delivery) 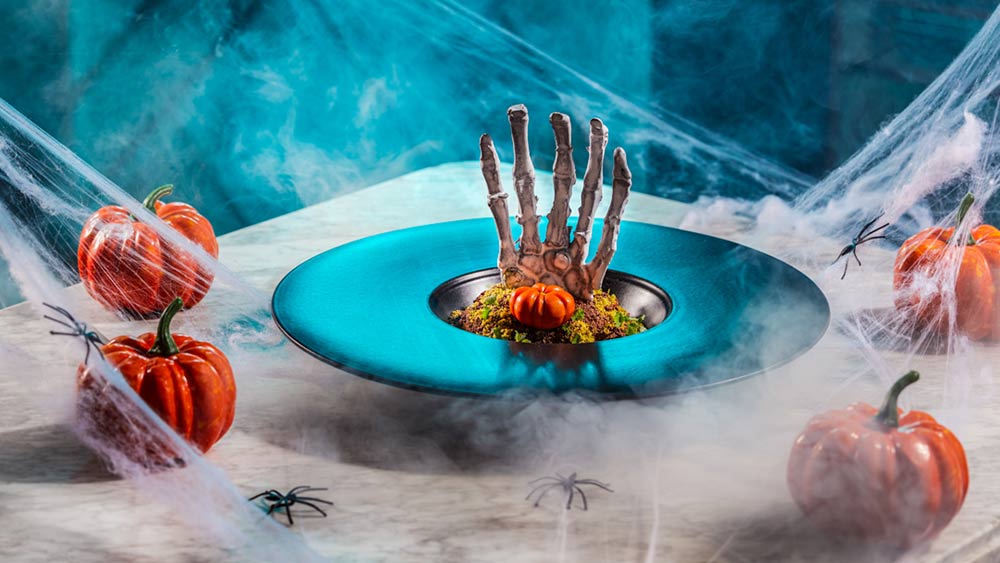 The Pumpkin Patch at the Ivy Soho Brasserie

The Soho Ivy has added this  Halloween-inspired dessert to its menu. The Pumpkin Patch (£7.50) is a blend of buried pumpkin brûlée, milk mousse mist, "chilling" vanilla ice cream and a "shadowy" chocolate brownie. They also have a number of special cocktails, including The Forbidden Fruit Daquiri (£9.25) featuring Cut Spiced Rum, Amaro Montenegro, pineapple juice, lime juice, sugar, served with a charred pineapple wedge. 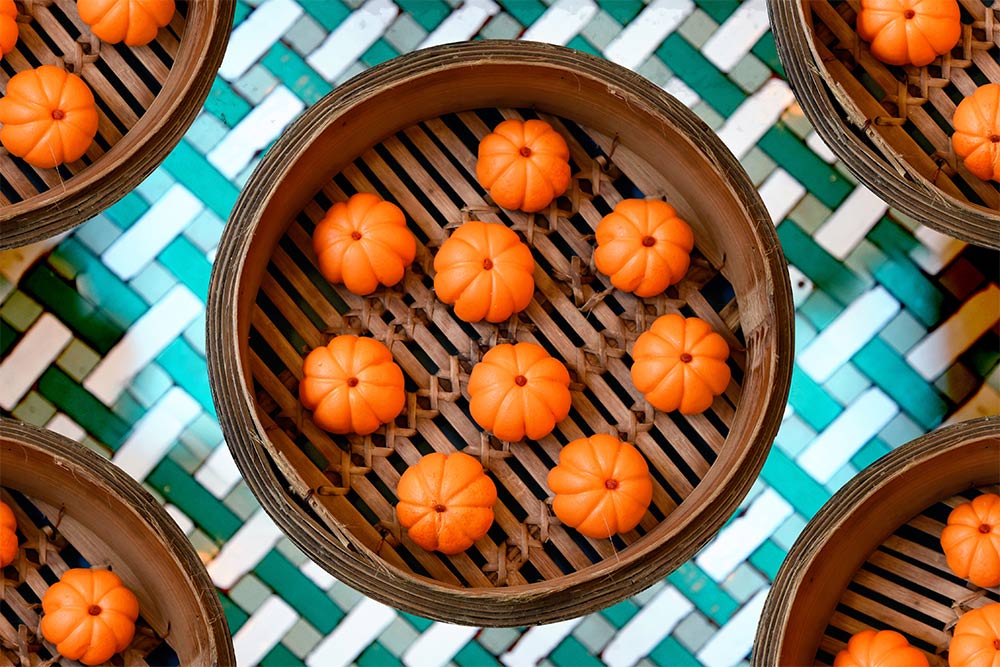 This year, Bunhouse's seasonal buns are plump pumpkin buns filled with sweet, roasted pumpkin spiced with fragrant star anise, cinnamon and cloves.The orange dough is scored to give the perfect pumpkin shape and it's finished off with a goji ‘stalk’.

When: Available until 31 October 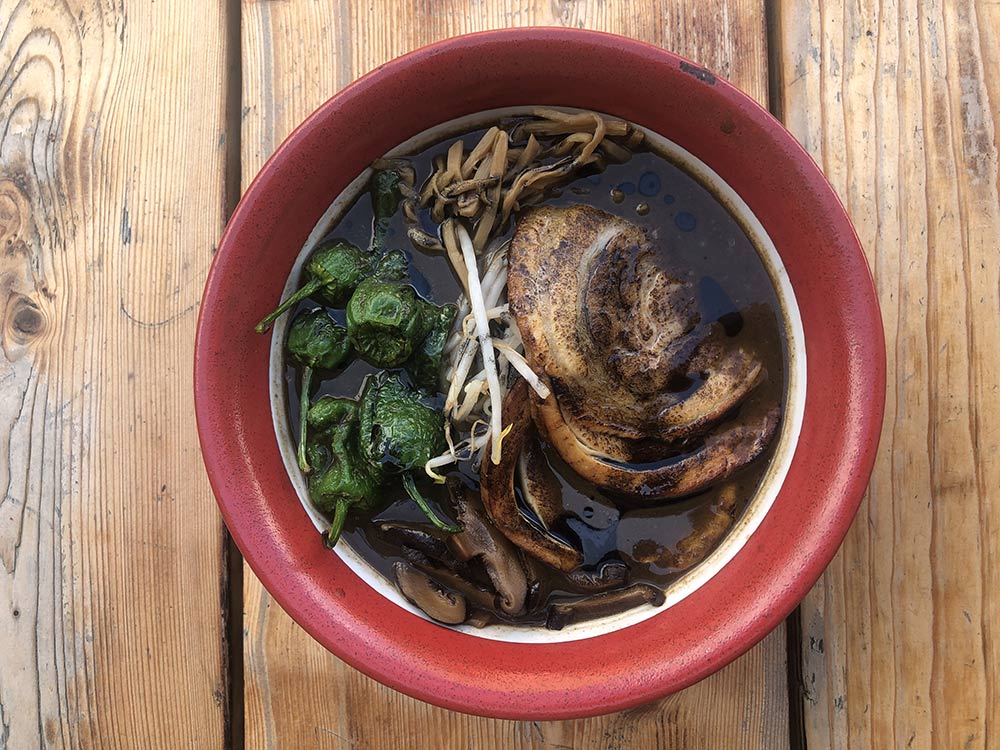 With a name that very much suits Halloween, Bone Daddies is digging up its special Halloween ramen. The Prince of Darkness is Bone Daddies’ homemade pork broth, chilli garlic tare, soy shiitake, padron peppers, charred chashu pork, bamboo and beansprouts with The Rib Man’s ‘Judas is Scary Hot’ sauce - his hottest ever sauce. This isn't for the faint-hearted.

When: Available until 30 November

Where: At all Bone Daddies restaurants 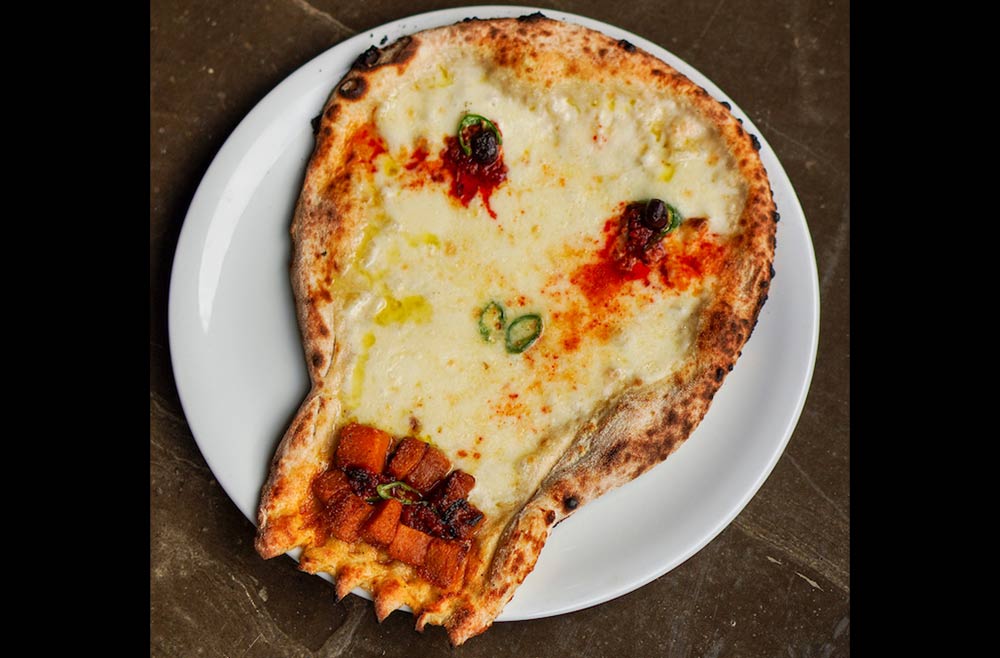 Bad to the Bone pizza from Mamma Dough

We have to admire a pizza that's created to look specifically like a skull. This pizza from Mamma Dough is made from n'juda, mozzarella, butternut squash, and fresh chillies - but it's not the only Halloween treat they'll have - there's also a Nutella and mascarpone pizza in the shape of the Scream mask

When: Available until 1 November 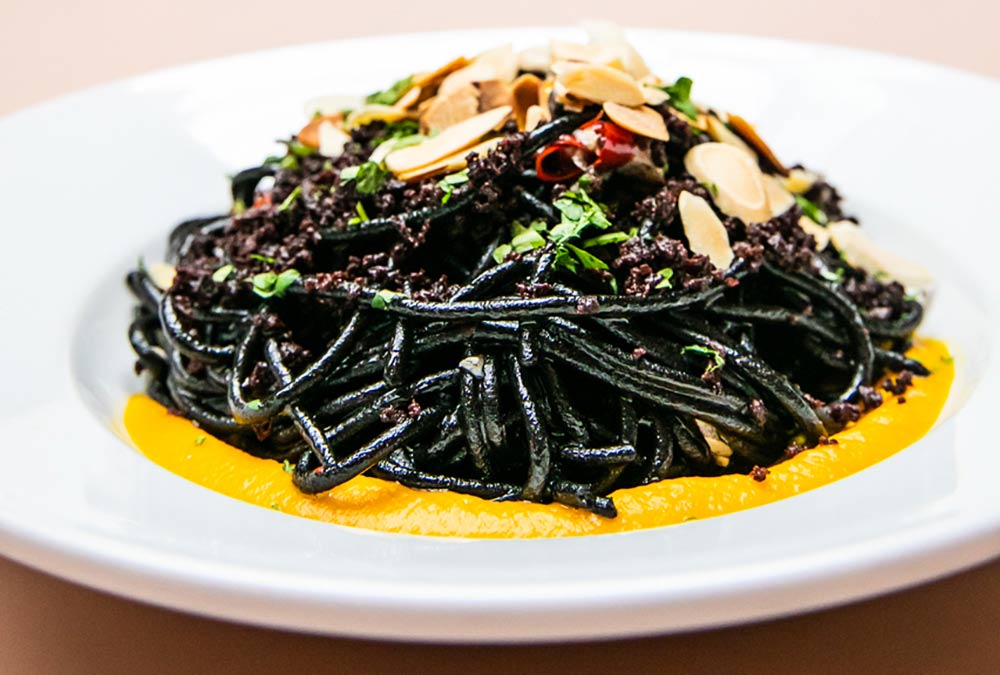 All of Seven Dials Market is getting in on the Halloween action. The above is from Strozzapreti and is black spaghetti served on a bright orange pumpkin cream, while The Cheese Bar has blue brain Cheese served with Damson and berries, El Pollete has "Black Bat Wings", Nanban is serving up Pig's blood ramen and Truffle has a Bloody Delicious burger. Alongside all that, Club Mexicana will be serving up Black Grapefruit Margaritas. 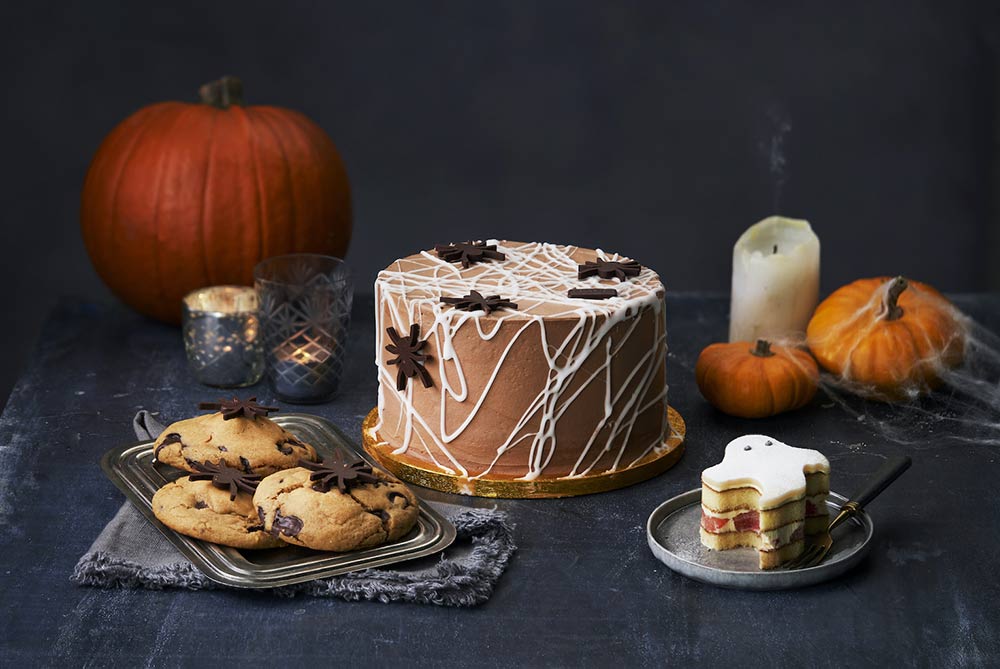 PAUL has unveiled its Halloween specials, including Creepy-Crawly Cookie (a soft and chewy chocolate chip cookie topped with a chocolate spider) and the Boo! Halloween Frasier - that's a light Genoese sponge shaped like a ghost with mousseline cream, fresh strawberries and marzipan. And there's also a much bigger spider cakes if you're celebrating at home.

Where: At all Paul stores to take away. 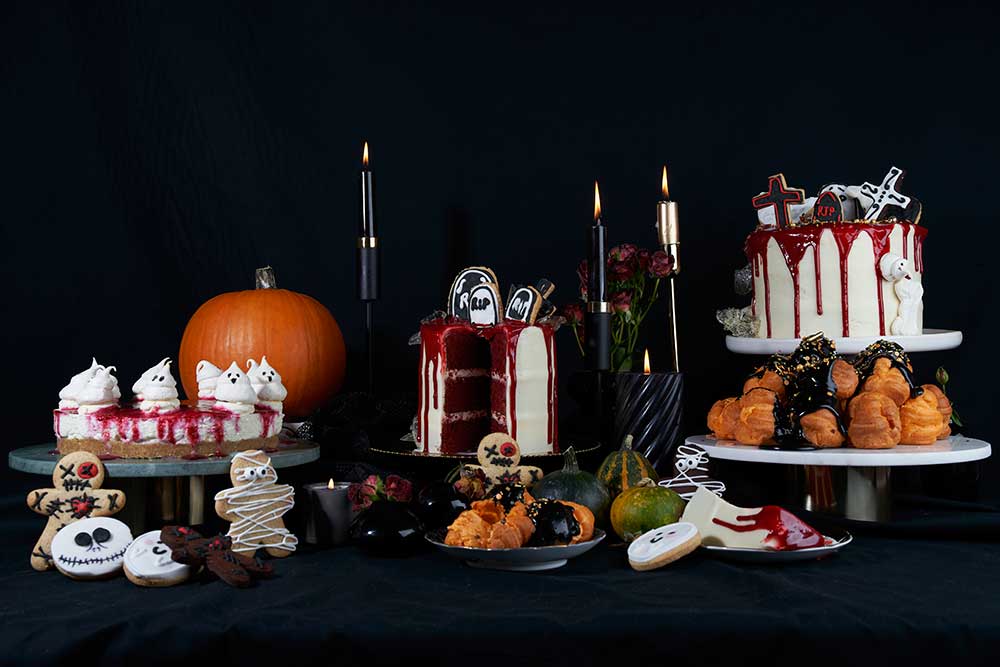 All Hallow's Eve collection from Proof

This new delivery-only bakery in Hackney has their Spookiteroles as the centrepiece - filled with orange crème Chantilly, doused with a black, chocolate and orange sauce and topped with Halloween sprinkles. They also have the Dead Velvet Cake - three layers of red velvet sponge sandwiched with a rich cream cheese frosting, and topped with a bloody chocolate drizzle and graveyard biscuits. 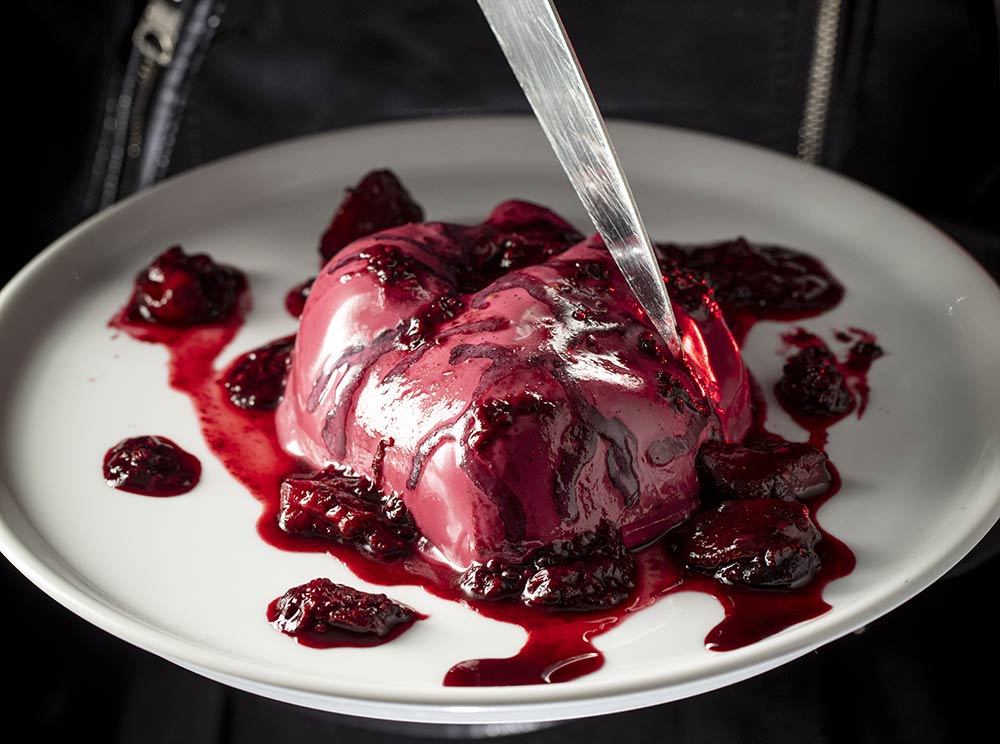 Marylebone pizza restaurant Crazy Pizza has created a Halloween dessert - the Barry Heart - which is a home-made vanilla panna cotta topped with fresh crimson berry compote. And if you'd like a drink to go with that, they have the Spicy Witch - Tanqueray Gin, Spicy Red Chilli Syrup and Lime Juice. 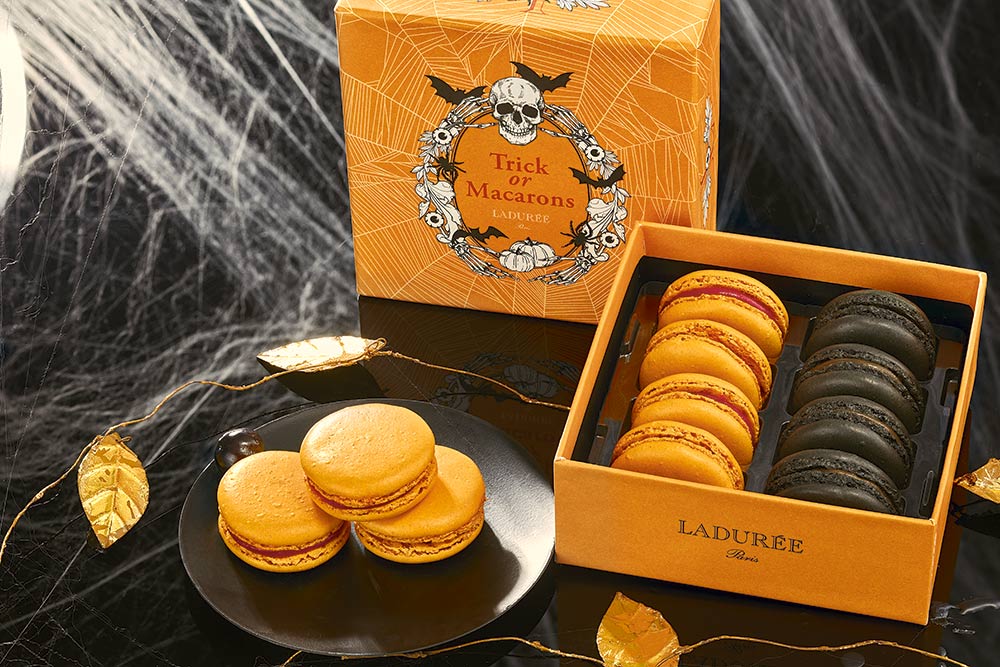 Trick or Macarons from Ladurée

These Halloween macarons from Ladurée come in boxes with a fluorescent glow-in-the-dark box, which really is going the extra mile. You can create your own selection from these - but a mix of the limited-edition Halloween orange-hued grenadine macarons and dark chocolate macarons seems to be the way to go.

Where: Collection instore or delivery 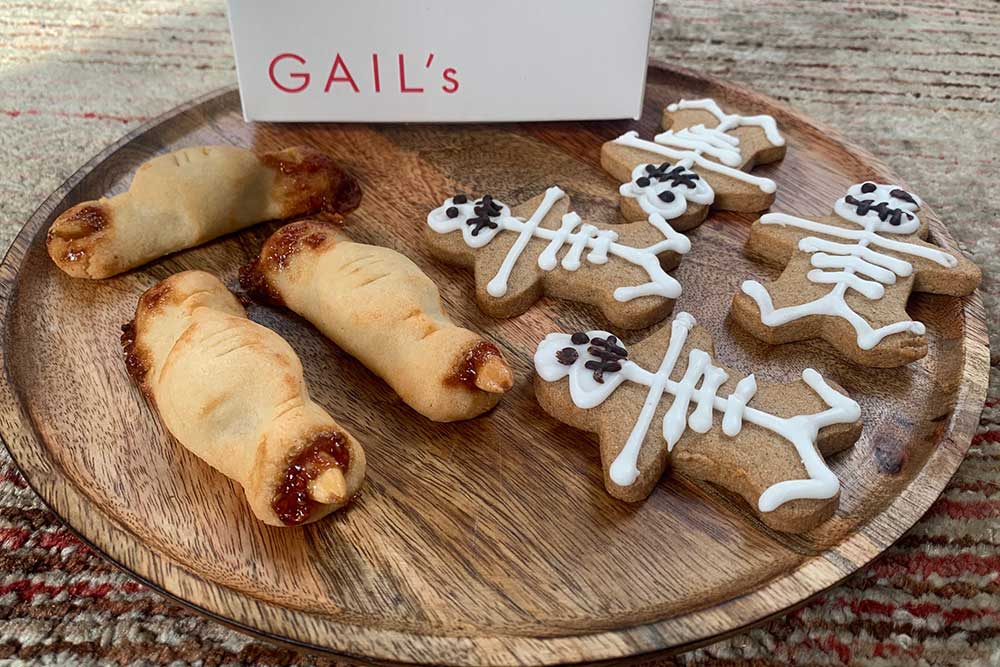 For Halloween this year, Gail's Bakery have two great options that kids (and big kids) will love - gingerbread skeletons and chewy monster fingers. We've tried both, and those monster fingers are almost too good to pass on to the children.

Where: Collection instore or delivery until 1 November.

Special Halloween (and Day of the Dead) events 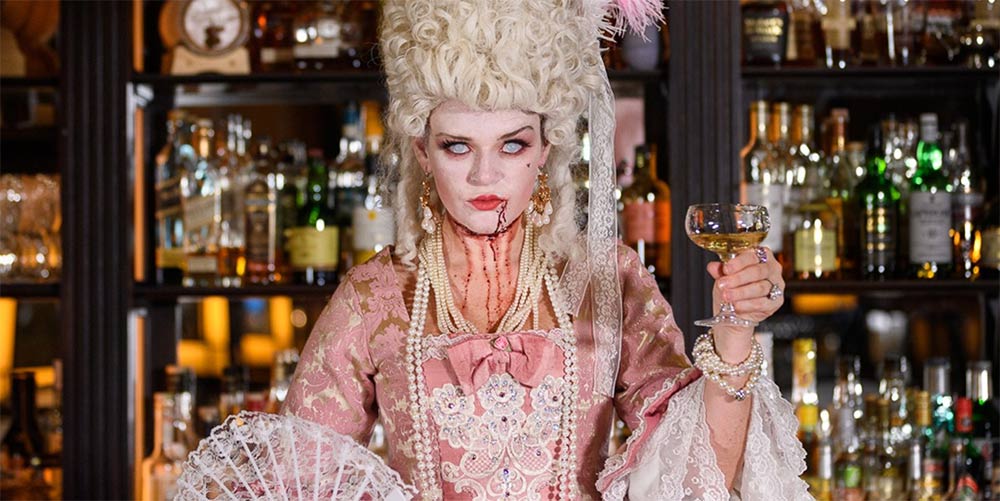 31 October - Balthazar in Covent Garden (above) are putting on a one-night French Horror Show with the restaurant transformed from 5pm. There will be "a series of terrifying shows will feature the apparition of a deadly Napoleon Bonaparte and a corseted Marie Antoinette" alongside a special cocktail - the Marie-Antoinette, featuring  Perrier-Jouët Grand Brut and strawberry purée with candy floss garnish.

26 October - 1 November - alongside special Halloween cocktails, Vinegar Yard is running an Instagram competition and the person dressed in the best costume and photographed with one of their cocktails below could win a a £150 bar tab.

28 October - The Standard is launching the latest book from Bompas and Parr - the Ghost Stories of TripAdvisor with special guests including legendary ghost hunters and experts. The Standard will also have special Halloween cocktails in al of its bars.

30/31 October - Temper (Soho & Covent Garden) has a Day of the Dead feast with dishes including "Chalupa with smoked pulled lamb" and "Smoked pork & white hominy, red pozole". There's an accompanying mezcal flight, of course, and a special Margarita for the weekend.

30 October - 1 November - Santo Remedio is celebrating Day of the Dead with a brand new Autumn cocktail menu and special dishes that include Pan de Muerto, a classic sweet bread made and served in Mexico in the run-up to the celebrations. Throughout the weekend there will also be a complimentary alcoholic Oaxacan Hot Chocolate with a choice of chilli, amaranth or mezcal to takeaway.

30 October - 1 November - Casa and Plaza Pastor have been remade for Dia de Muertos’ with the restaurant displaying a colourful ‘ofrenda’, or altar, to remember the departed, created by The Mexican Craft Collective, a group of UK-based Mexican craftswomen living in the UK. El Pastor’s churros cart will sit outside of Casa Pastor, serving hot churros with chocolate or tequila-chocolate sauce and frozen margaritas to take-away.

31 October - Nebula in Hackney is holding an Astroworld-themed 80s dress up brunch bash with plenty of outdoor seating for Tier 2 socialising.

31 October - Discount Suit Company has special cocktails and Jack The Ripper walking tours - and you'll get a complimentary hot punch on arrival before starting the tour - and there's a 25% discount at the bar afterwards.