The best new breakfasts in London

Weekend brunch may be the sexy way to start the weekend, but there's a lot to be said for a proper working day breakfast. So whether you're looking for somewhere to have a morning meeting, or you need to undo the work of the night before, here are some new places offering a very decent London brekkie. 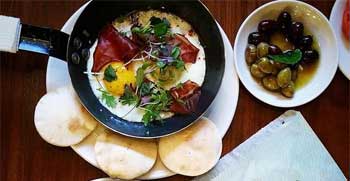 If you're looking for something a little different, or a place to feast to stop you dangerously shopping in Borough Market on an empty stomach, head for Arabica. Their new breakfast menu features all manner of delicious-sounding dishes including Za’tar man’ousheh with scrambled eggs £8, an Arabic fry-up for £10 or, if you prefer something a little sweeter, oat porridge with banana, tahini, almonds & honey (£6). Get your caffeine fix with a traditionally brewed Turkish coffee with green cardamom and served with the grounds or have a healthier tisane des amoureux made with hibiscus flowers, apple, orange, cassia and rose petals. 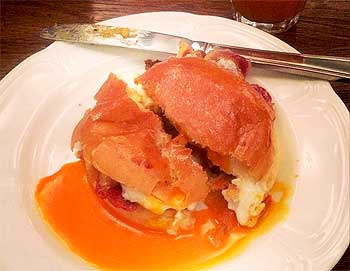 As you might expect from a restaurant devoted to the humble oeuf, there's a cracking breakfast on offer at Neil Rankin's Bad Egg. Breakfast baps feature the usual suspects but there's also a fried chicken, peanut butter & jam (£6) and one with avocado, sriracha & fried egg (£5.50). If you're feeling really hungry you'll have to go for the Huevos Rancheros (£9) where the scrambled eggs come with masa harina, chilli, chorizo, peppers, salsa and guacamole and are served with fried tacos on the side. Bottomless tea is £2.50 and if you're copping out altogether there's always a fruit salad for £3.

Breakfast served 8 until 11am, Monday to Friday. 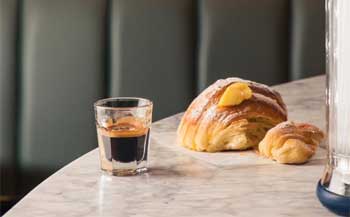 Cocktail bigwig Tony Conigliaro paired up with coffee expert Marco Arrigo to open Bar Termini in Soho. This is the place if you're looking for an Italian-style pit-stop first thing in the morning with a choice of six Italian coffees. Take it standing up at the bar and an espresso is a bargainous £1. But if you prefer to have a more leisurely breakfast there's a selection Italian pastries, mini panini or grapefruit.

Breakfast is served: from 7.30am 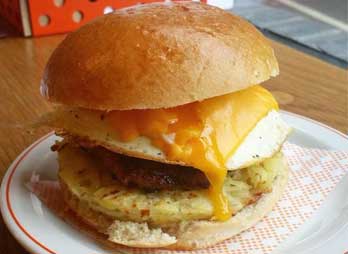 This East London diner has just started serving breakfast and the menu looks very appealing, if a little on the lardy side. There's a Breakfast Skillet (£5) jalapeño corn pudding topped with melted cheddar and baked eggs; Waffles & Bacon - fresh griddled sweet waffles, crispy bacon and Canadian maple syrup and a Breakfast Sandwich (also available for take-away too) consisting of crispy hash brown, sausage patty, fried egg and melted American cheese on a soft bun (pictured). But what we reckon will get the most press is Bird's Doughnut Buttie – crispy bacon inside a fresh doughnut, covered with maple syrup (£3.50).

Breakfast is served: From 9am every day. 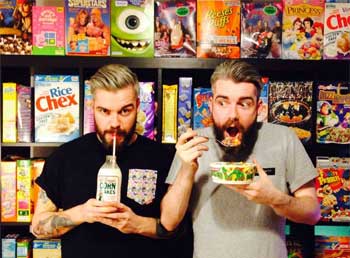 Well we couldn't very well leave these guys out, could we? Not only are they devoted to all things breakfast cereal, but they also picked up the Readers Award at the 2014 Hot Dinners awards. If you're planning a breakfast trip here, what you need to know is that there are 120 cereals on offer, 30 varieties of milk and 20 different toppings.

Breakfast is served: every day from 7am to 10pm 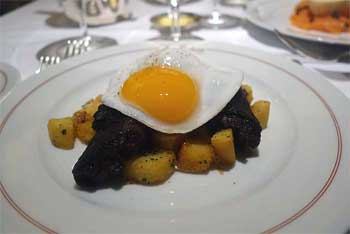 If you're lucky enough to be staying at The Beaumont, your inclusive breakfast at The Colony Grill Room focuses on two breakfast biscuit scones served up with whipped butter and preserves, along with tea, coffee and juice. Their more extensive breakfast menu features the usual viennoiserie you've come to expect on a Corbin and King restaurant menu, but with the addition here of a special duck egg hash section. There are four hash options from a vegetarian version with Portobello Mushroom & Spinach Hash (£9.75) to Corned Beef Hash (pictured - £13.25).

More about the Colony Grill Room 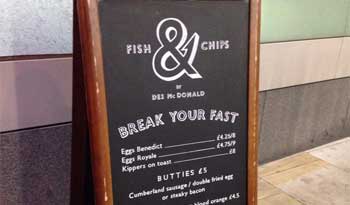 Perfect for early city meetings, the City branch of Fish and Chip Shop's brand-new breakfast menu includes old classics like Manx Kippers on toast with horseradish butter and water cress (£8), new favourite such as crab & chilli omelette (£9) or a smoked salmon & avocado buttie (£8). If you're looking to eat light, there's house made granola with Greek yoghurt and blood orange (£4). But we reckon there'll be a fair few takers for the Fisherman’s breakfast (£11) - which is all the usual suspects plus French toast and a coffee of your choice. 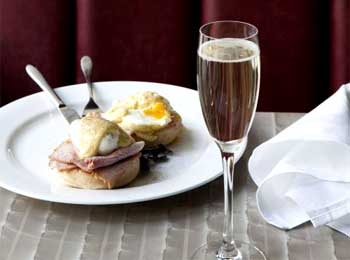 Just in time to coincide with the private club's 15 new bedrooms, they're opening the restaurant to non-members at breakfast, bringing in a new menu "dedicated to fuelling creativity". There's definitely a healthy bent to the dishes, ranging from porridge and honey with pumpkin seeds and raw cocoa nibs (£4.50) to probiotic yoghurt served with blueberries and chia seeds (£6). But you could also push the boat out with wild rice kedgeree, smoked mackerel and a boiled egg (£7.50).

Breakfast is served: until midday Monday to Sunday

More about The Hospital Club 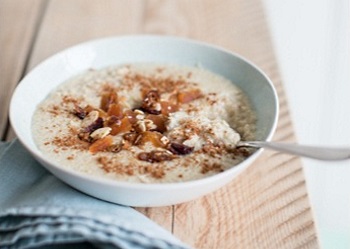 This cheerful new cafe which opened just before Christmas on the New King's Road is serving up all manner of healthy breakfasts. A deli-cum-cafe and juice bar, inspired by California and Cape Town, its breakfast menu includes healthy vegan bircher breakfast pots, quinoa and oat porridge with almond milk and homemade granola as well as smoked salmon & cream cheese bagels or berry smoothies.

Breakfast is served: Monday to Friday from 7.30am and Saturday/Sunday from 9am until 11.30am 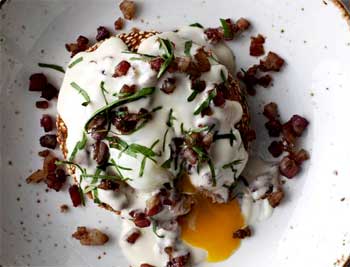 This all day Greek restaurant serves up a most intriguing selection of dishes in the morning. How do you fancy Earl Grey infused rice porridge? Or maybe Tsoureki - a brioche-style bread flavoured with aromatic Greek spices, served with clotted cream and sour cherries? Smoothies are all made with Greek yoghurt, natch, or there's iced Persian pomegranate tea to kickstart your day.

Breakfast is served: Monday - Friday 8am - 12am 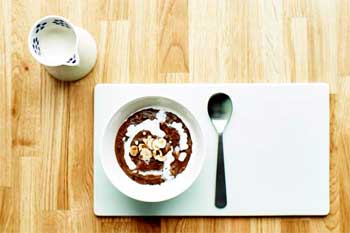 This Danish all-day cafe is growing a slow but steady reputation for the quality of its breakfasts (and open sandwiches for lunch). In the morning you'll want to try Breakfast Øllebrød (if you can pronounce it) which is a traditional porridge dish made with dark rye bread. There's also a selection of patisseries including ‘Tebirkes’, puff pastries topped with poppy seed and filled with a sugar-marzipan paste.

Breakfast is served: from 8am Tues-Sat and from 10am on a Sunday. 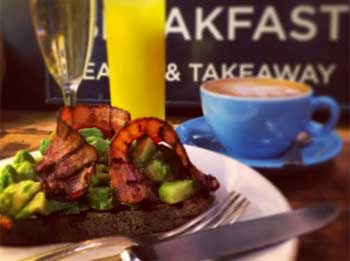 Tucked half way up Villiers Street between Embankment and Charing Cross Stations, Villiers is owned by the younger generation of the Gordon family who own the legendary Gordon's Wine Bar. Breakfast includes virtuous dishes such as bircher muesli with poached pears and almonds £5.50 as well as treats like avocado on toast with crispy smoked bacon (£9). Push the boat out with the Villiers big breakfast, eggs, bacon, sausages, black pudding, tomato and toast (£12.50)..

Breakfast is served: from 7.30am Monday to Friday and from 8am at the weekends.

New street food traders Le Swine have the backing of top chef Bruno Loubet. They reckon they're serving up the perfect bacon sarnie.