Is there any better way to carb load than by scarfing down an order of dumplings. We've gathered together a list of London's best dumplings, from dim sum favourites to hearty Eastern European options. 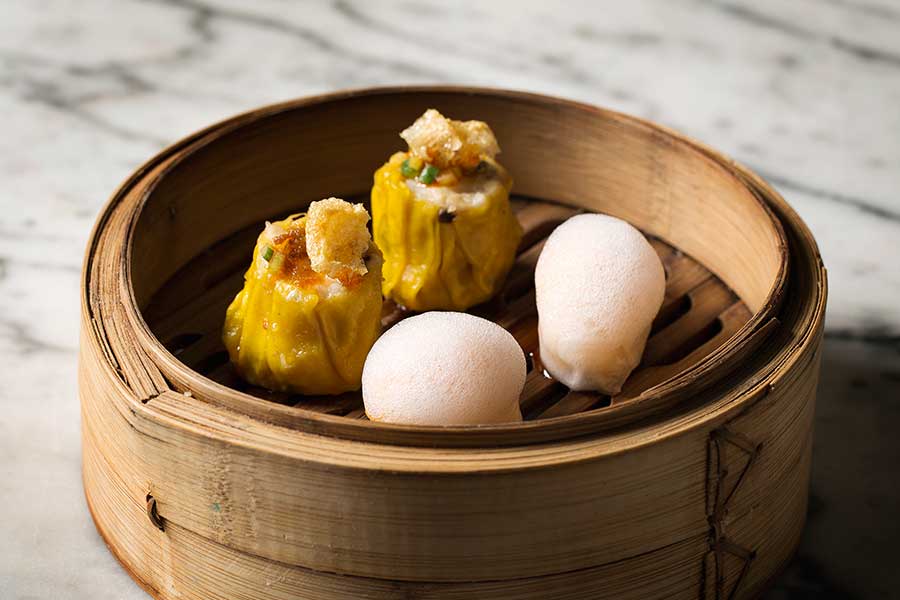 One of the best reasons to clear your diary and go for a long lunch is the daytime dim sum menu at Andrew Wong's Victoria restaurant. The clear shrimp dumplings with sweet chilli sauce and topped with a rice vinegar cloud are amazing and come in a platter along with sui mai with pork crackling.

Find out more about A Wong 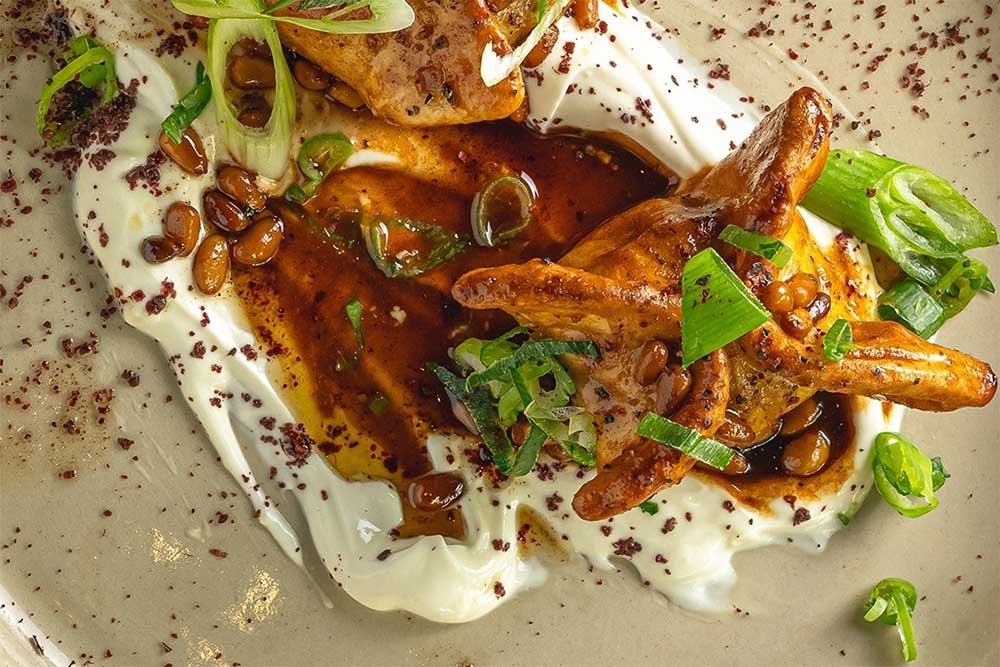 The kebab dumplings at Bala Baya aren’t always on the menu, but when they are you should hightail it down here to order them. Featuring braised lamb and shawarma spices they’re served with pine nuts and garlic yoghurt with fresh spring onion and a rich dates jus.

Find out more about Bala Baya 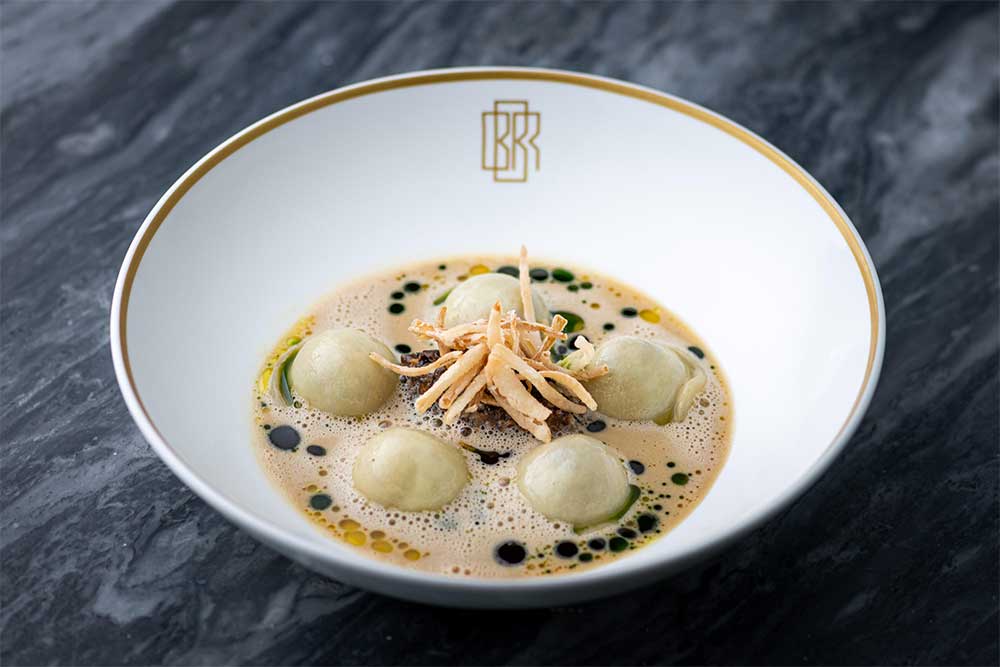 Dumplings may have begun as peasant fare but they’ve had a luxe makeover at Bob Bob Ricard where the Truffle, Potato and Mushroom Vareniki is the dish to go for. These Russian dumplings are garnished with crispy shallots and served with forest mushroom velouté. 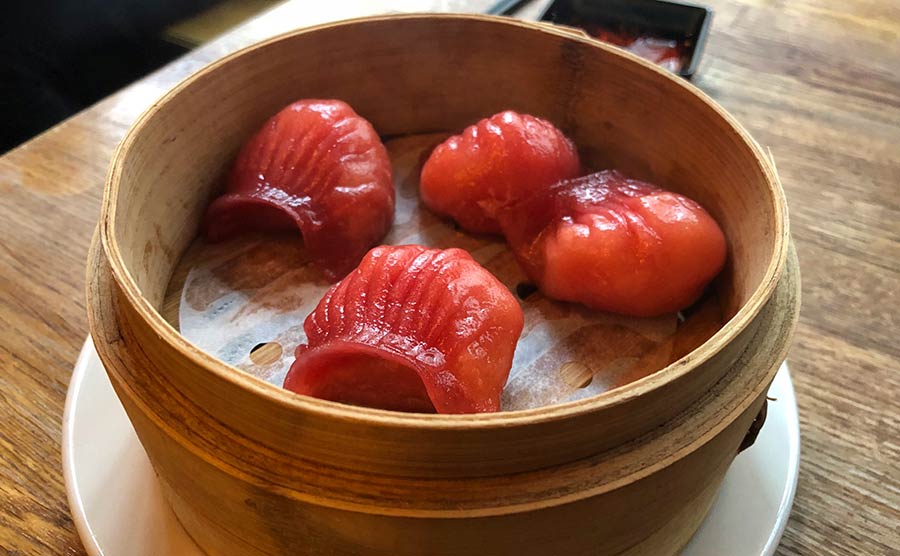 This Northern Chinese restaurant burst onto Instagram with their colourful dumplings which taste every bit as good as they look. Our favourites were the ruby prawn dumplings in beetroot pastry

Find out more about BaoziInn 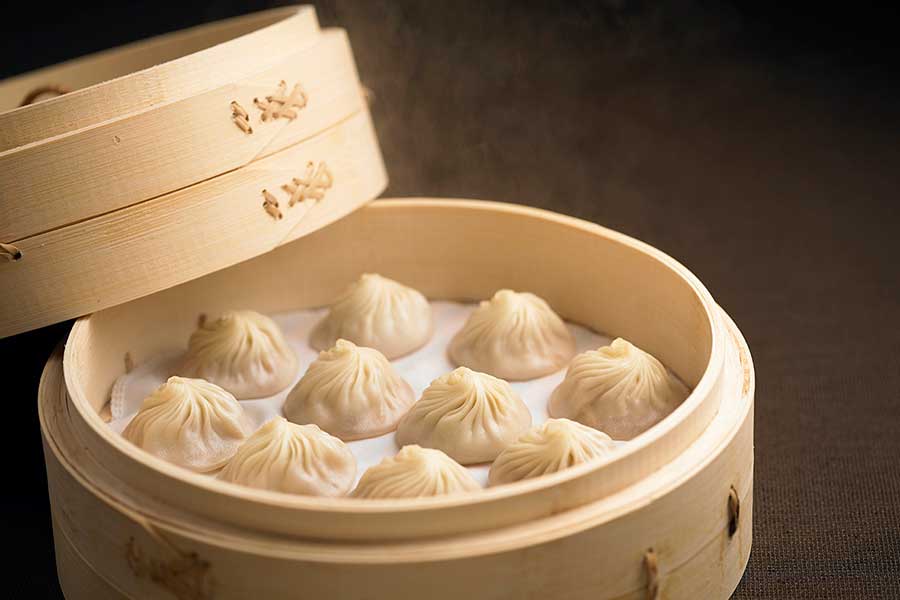 Since opening their first London restaurant in Covent Garden, Din Tai Fung have sold over 1.1 million Xiao Long Bao. And there's a reason for that; they've refined their dumpling production line so perfectly you always know you're going to get great xiao long bao here. 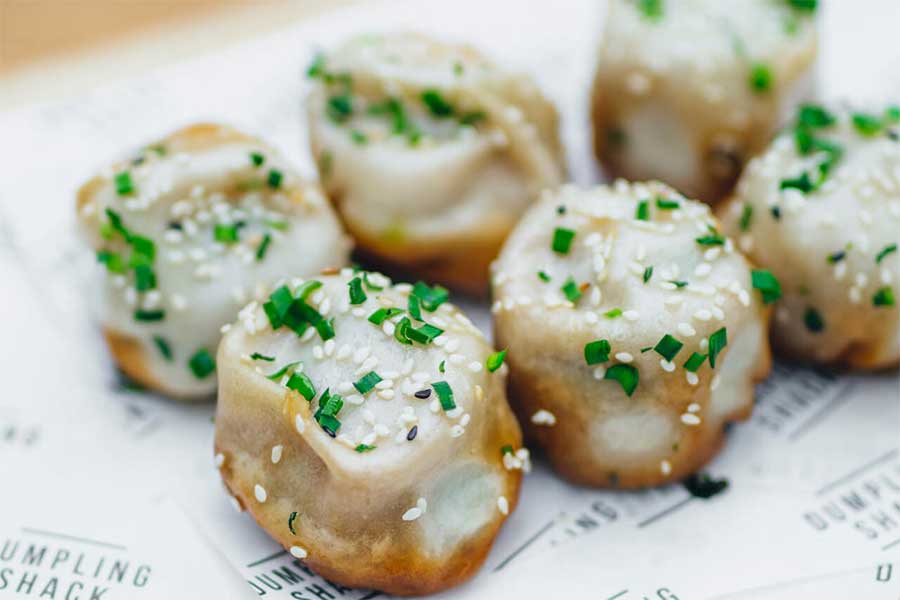 The fried shengjianbaos from this East London street food trader are just fabulous - filled with pork and leek, these soup dumplings are a sturdier cousin of the xiao long bao and every bit as good.

Find out more about Dumpling Shack 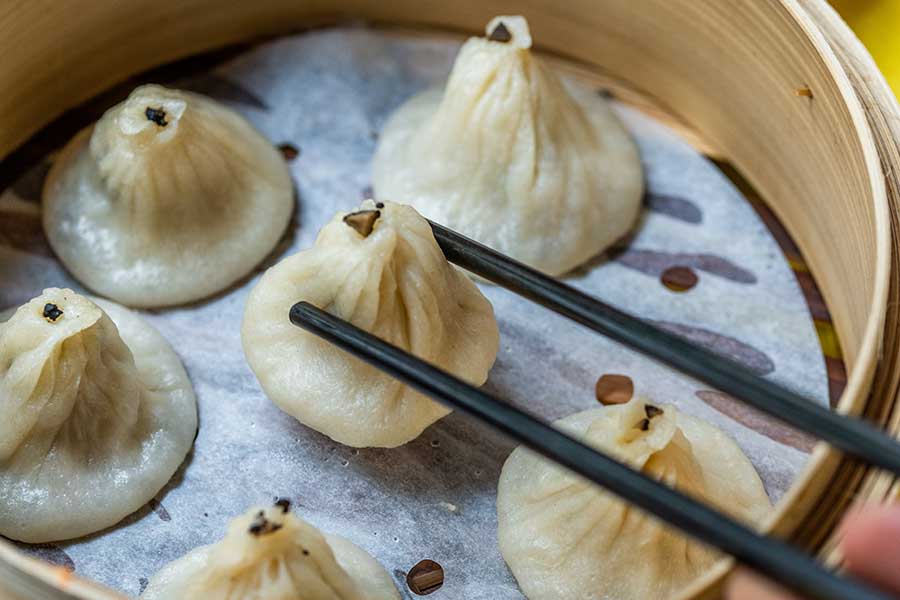 Before Din Tai Fung burst on to the London scene, there was this Chinatown staple and it still turns out exemplary xiao long bao - if a little less delicate than DTF.

Find out more about Dumplings Legend 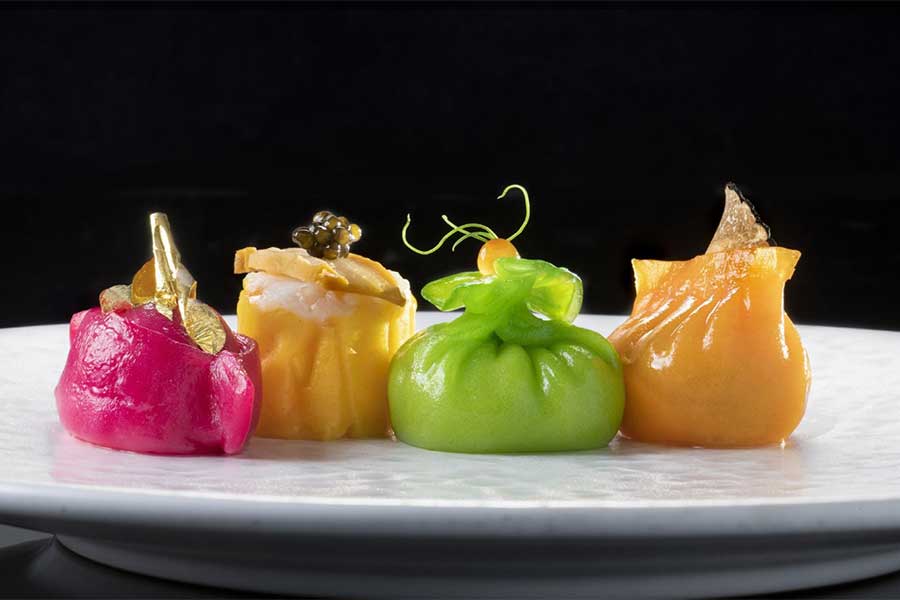 Find out more about Hakkasan 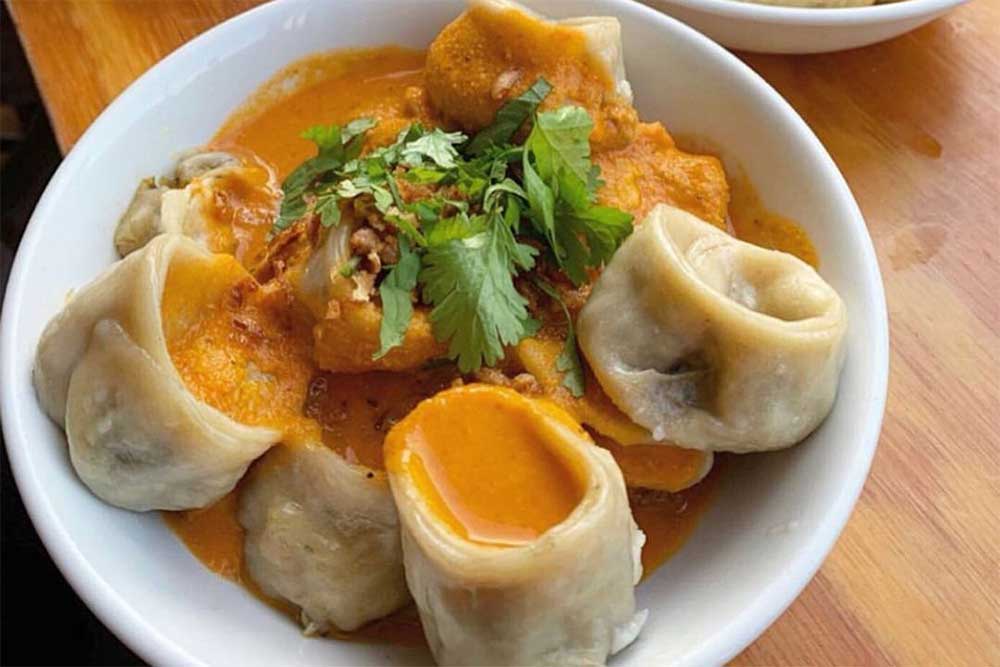 As the name suggests, this Dalston spot prides itself on its Himalayan momo dumplings. They come steamed or fried and while there are loads of options, the house favourite are the jhol momo which come in a bowl of curry sauce.

Find out more about House of Momo 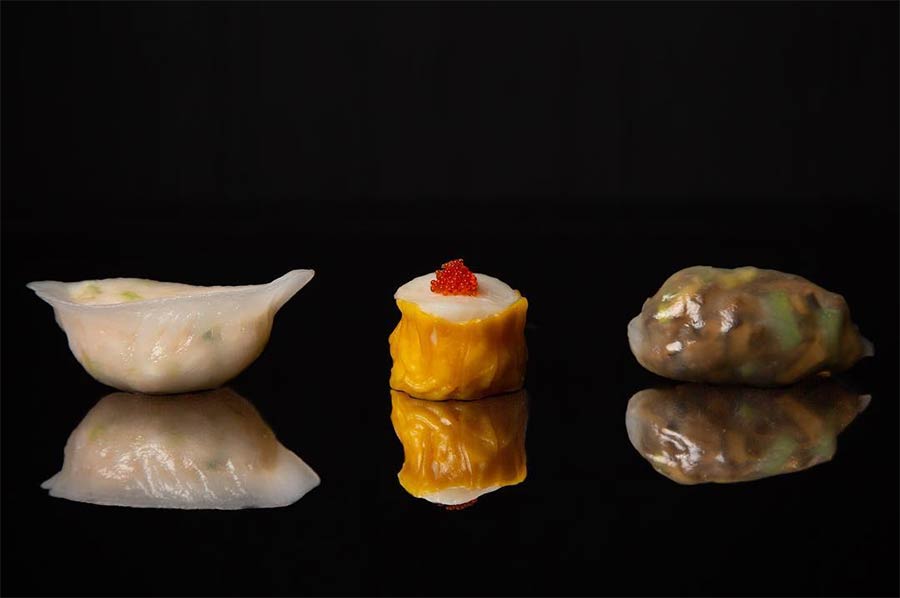 Best known for their very highly rated Peking duck, this high-end Chinese restaurant also does a mean line in dim sum. Available for lunch every day, highlights are "Seafood Dumpling Consommé with Dried Scallop and Bamboo Pith" while the Shanghai soup dumplings are made with Iberico pork.

Find out more about Imperial Treasure 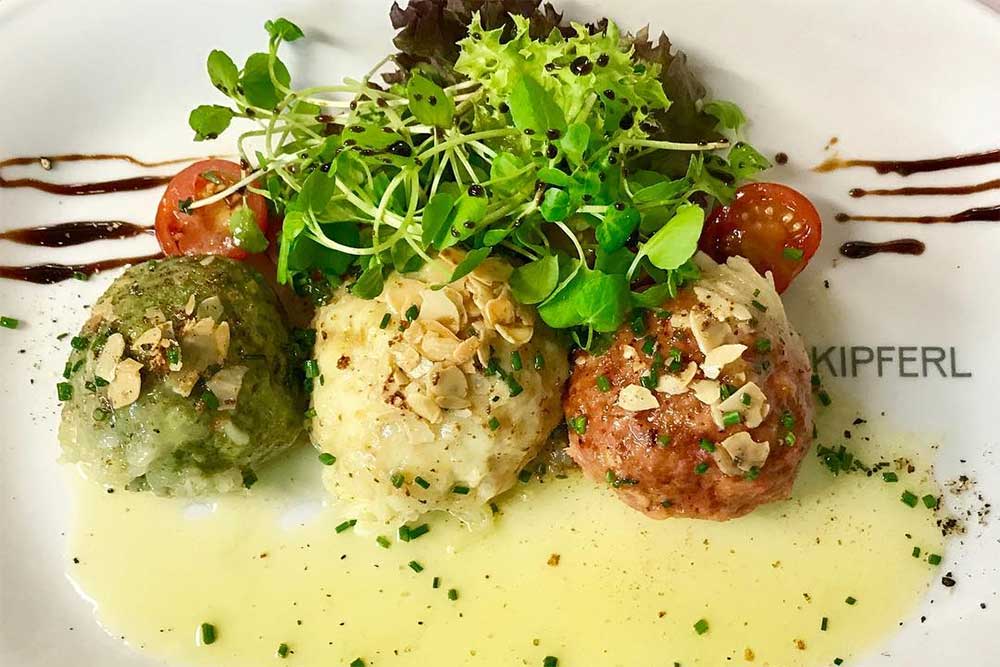 It'd be a pretty poor affair if you couldn't find good dumplings on an Austrian menu. Thankfully Kipferl on Islington's Camden Passage has a variety of dumplings on offer from their spinatknodel - spinach dumplings with organic mountain cheese and brown butter, to their kaspressknodel, fried savoury cheese dumplings with a sour cream dip.

Find out more about ‬Kipferl 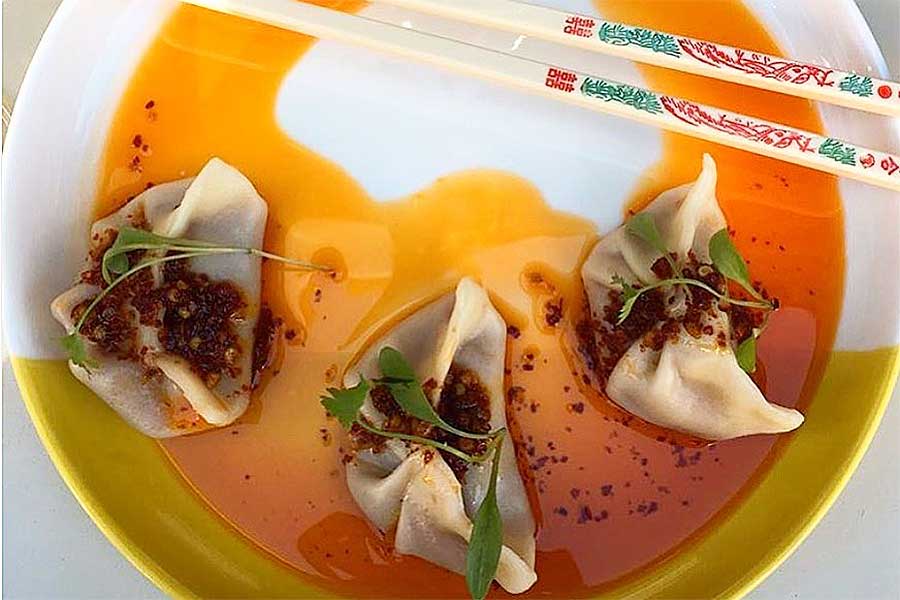 Proving that vegan Chinese food can be every bit as powerful a taste bomb as its meaty cousin, this Hackney Chinese restaurant serves up one regular vegan dumpling - "meaty" veg and Chinese chive dumplings with zhong sauce and chilli oil.

Find out more about Mao Chow 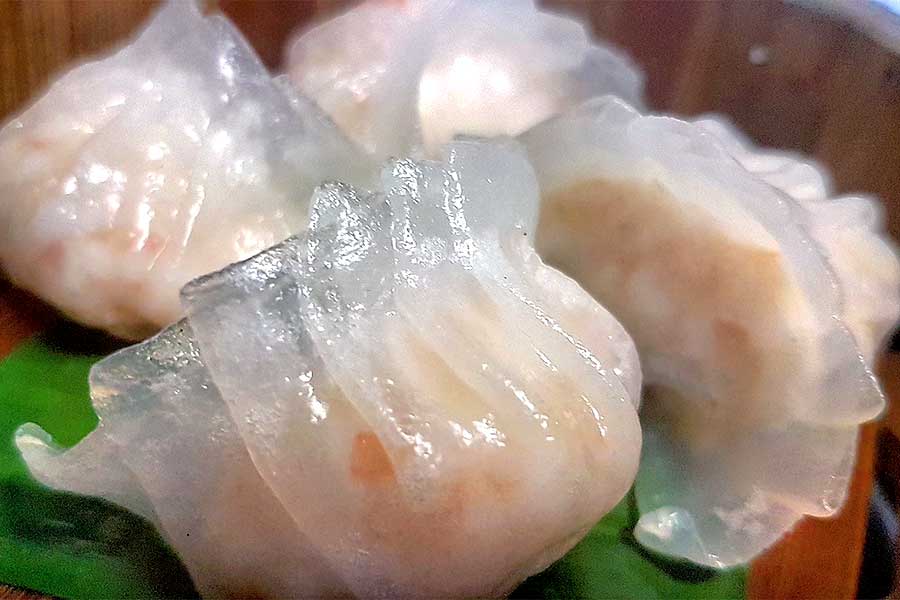 My Neighbours The Dumplings

This family-run dumpling and sake house prides itself on the freshness of its house-made dumplings, and there's always a few interesting specials to look out for. But the classic, always-on Prawn Har Gau are just plump and gorgeous and unmissable.

Find out more about My Neighbours The Dumplings 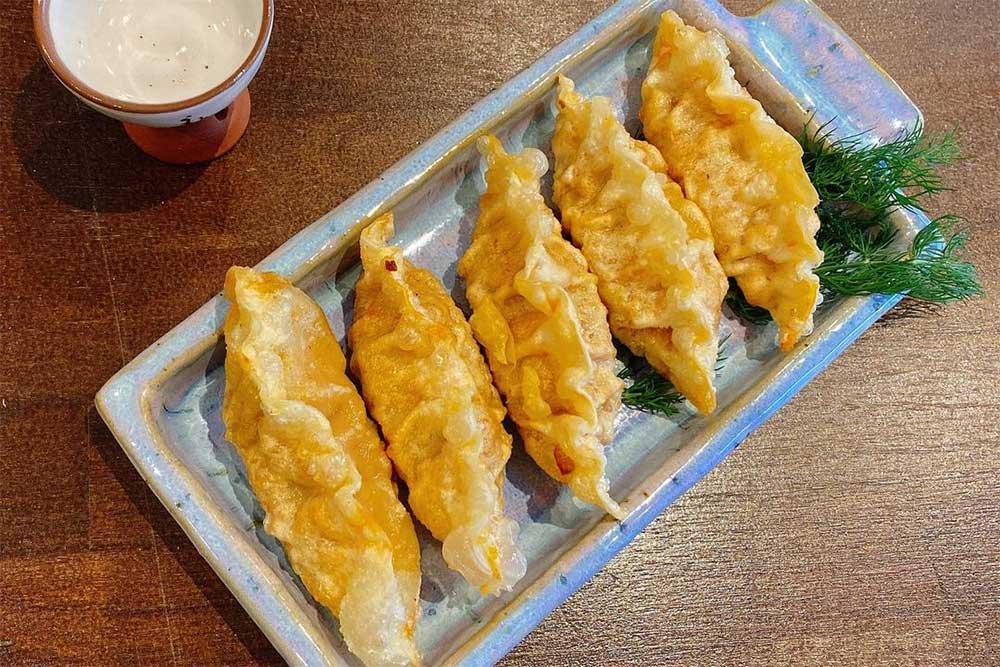 If it's Korean dumplings and Soju shots you’re after, then Ogam on Chapel Market is the place to go. And what better bar food to line your stomach with than their spicy kimchi dumplings?

Find out more about Ogam 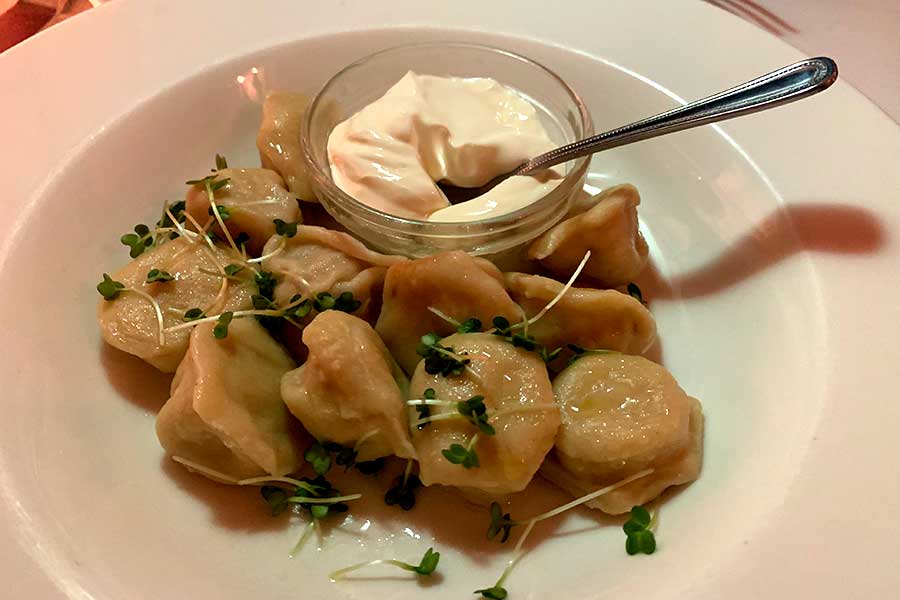 Comfort food specialists Ognisko have all manner of Polish dumplings on their menu in South Ken from the Kopytha dumplings in their soup to cheese, potato and onion pierogi. But for us, the must-have ones are the veal and pork pelmeni, served with sour cream.

Find out more about Ognisko 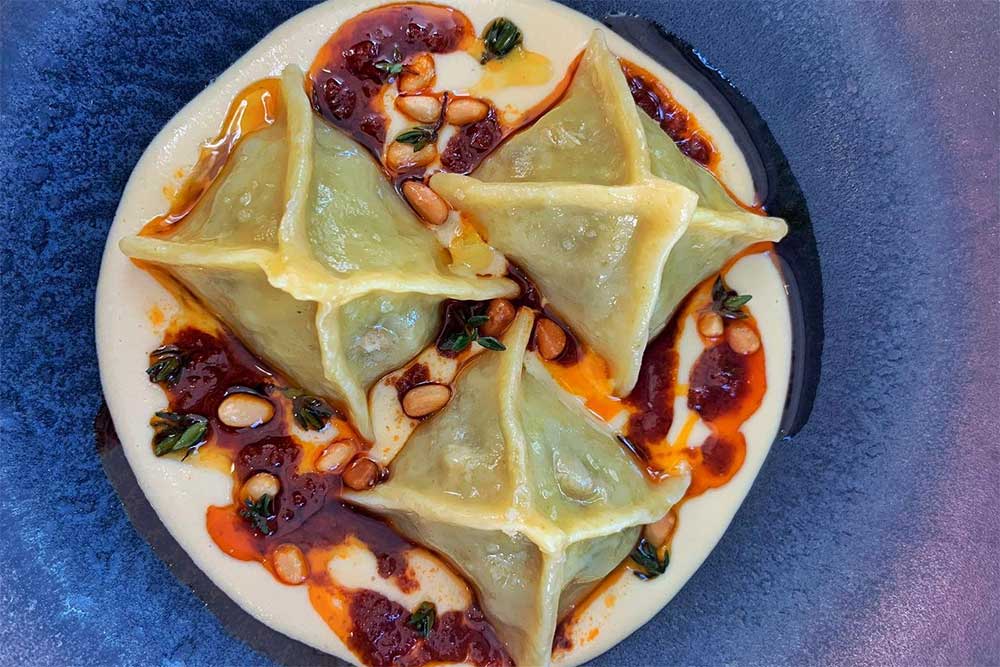 Certainly one of the dishes that Selin Kiazim’s East London restaurant is best known for is the platter of beef and sour cherry manti. They come with not one, but two sauces - a yoghurt sauce, and then some spicy tomato-chilli butter.

Find out more about Oklava 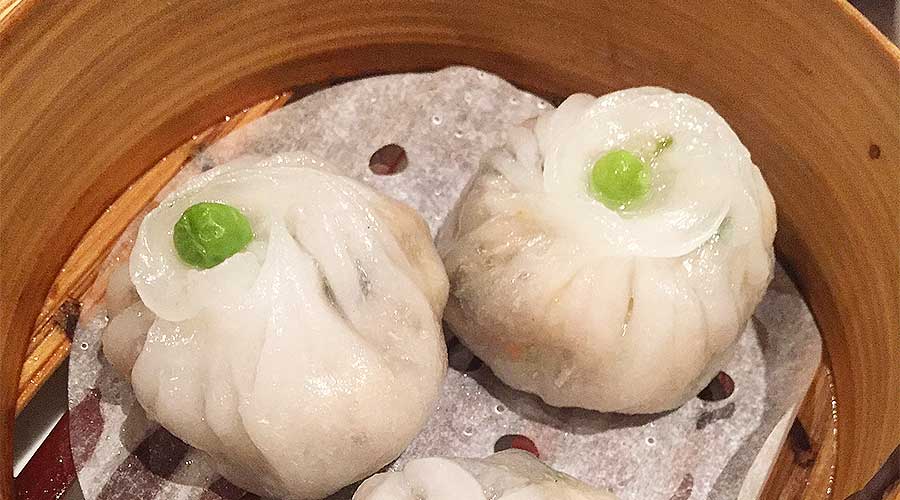 If you're looking for vegetarian dumpling options, then Pearl Liang's daytime dim sum menu has a pretty decent selection, the best of which is their monk's vegetable dumpling with a hefty mushroom umami hit.

Find out more about Pearl Liang 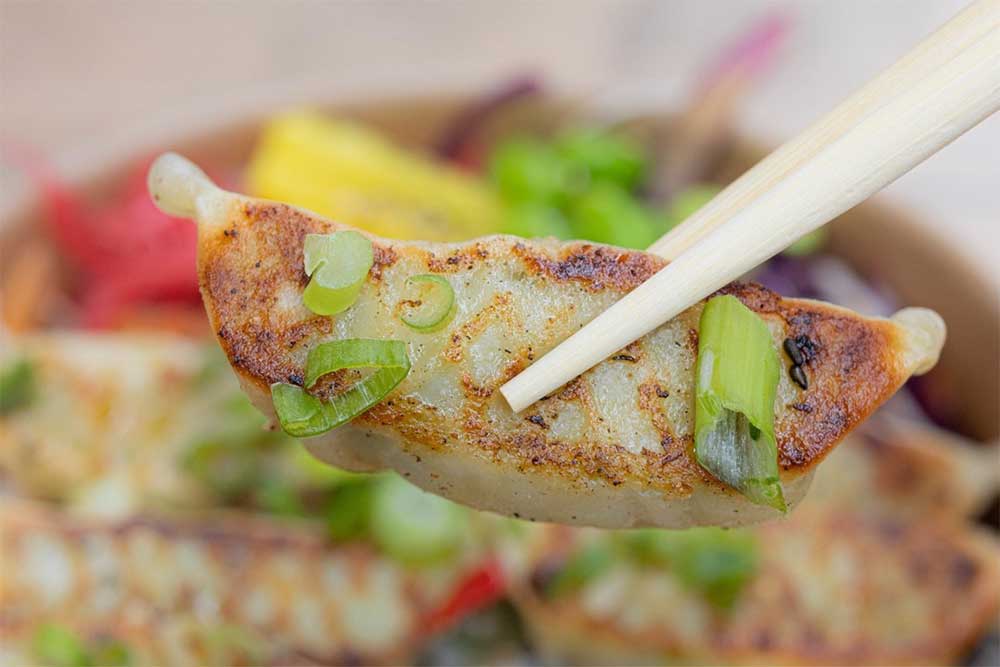 Boxpark Shoreditch, Spitalfields Market and Canary Wharf as well as a residency at The Green in Clerkenwell

One of London’s early street food successes, this husband and wife team have been serving up homemade gyoza since 2012. The range includes a variety of vegan and veggie options, but our favourite’s probably the pork and Chinese chive. They also do nationwide delivery of frozen gyoza.

Find out more about Rainbo 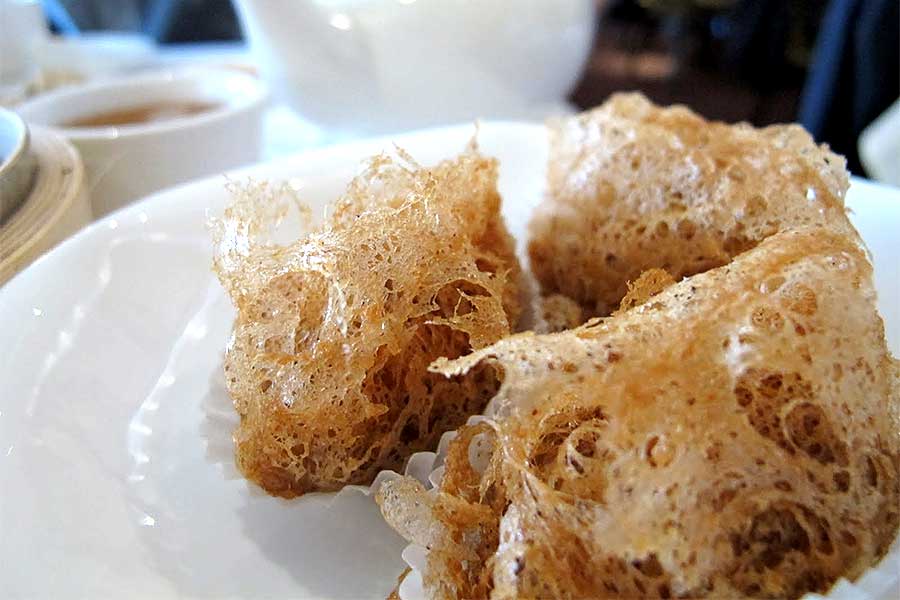 We couldn't very well do a London guide to dumplings without including the group which feeds dim sum to thousands of Londoners every day. But if you are trying to work out what to have, we'd say start with the Fried Yam Paste Meat Dumplings.

Find out more about Royal China 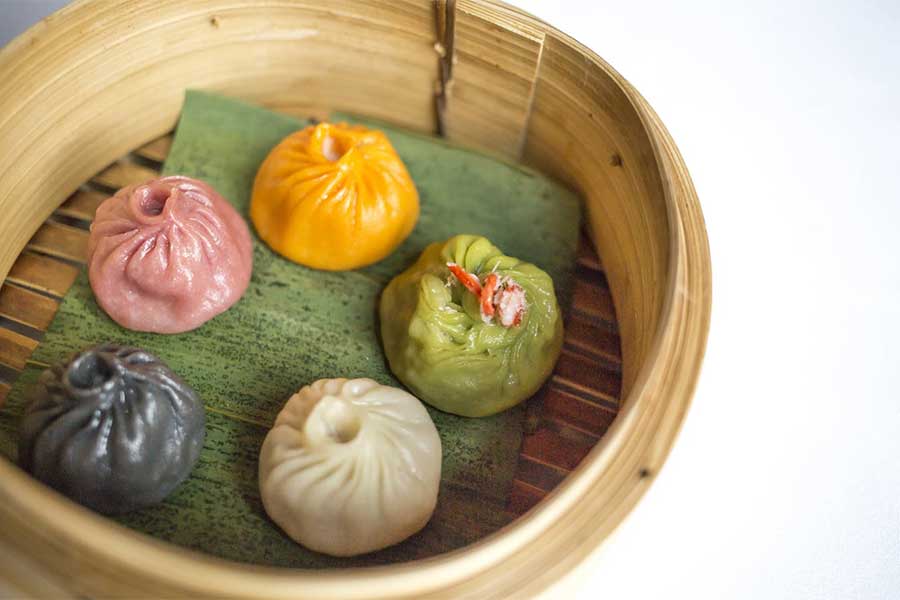 Any Chinese restaurant that gets the Standard's Fay Maschler to describe their xiao long bao as 'superb' has to be doing something right. So obviously go for their rainbow-coloured soup dumplings while you work out what else you want.

Find out more about Shikumen 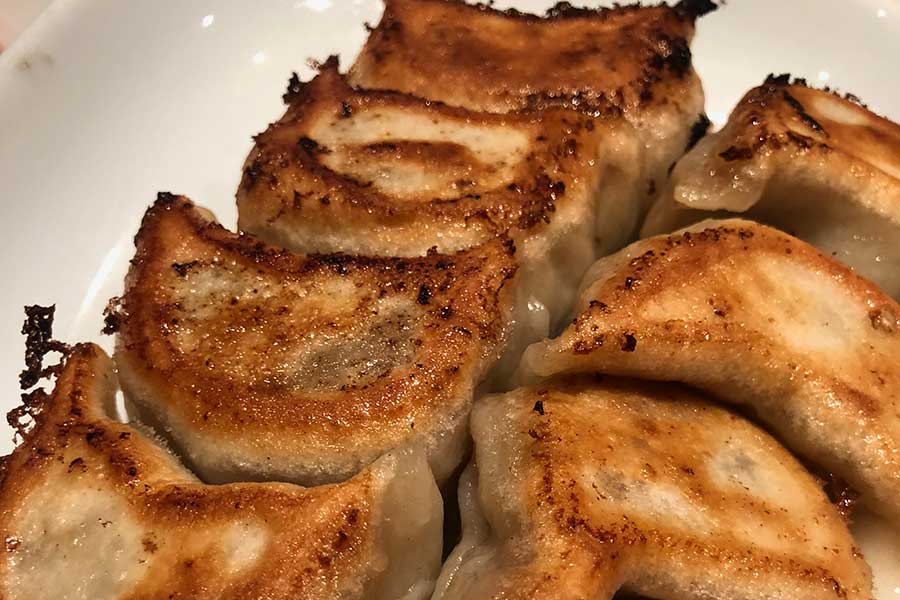 This popular Camberwell spot focuses on Xinjiang cuisine. Go for a meaty double pairing, starting with their popular lamb skewers and following with beef and onion grilled dumplings.

Find out more about Silk Road 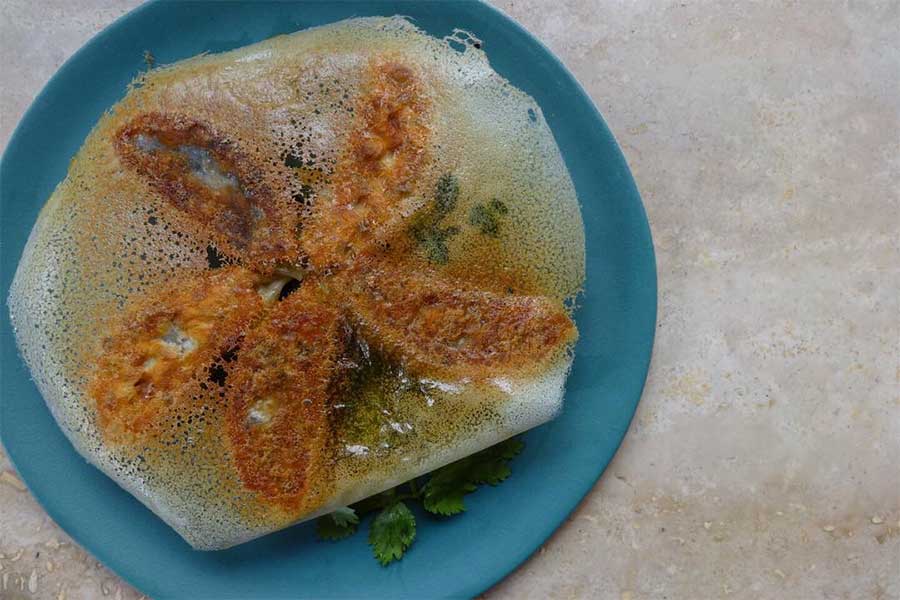 This dinky gyoza bar on Shepherd Market has an ex-Novikov chef in charge of serving up exemplary fried dumplings. As it's Mayfair you might as well plump for the chicken and foie gras option.

Find out more about Titu 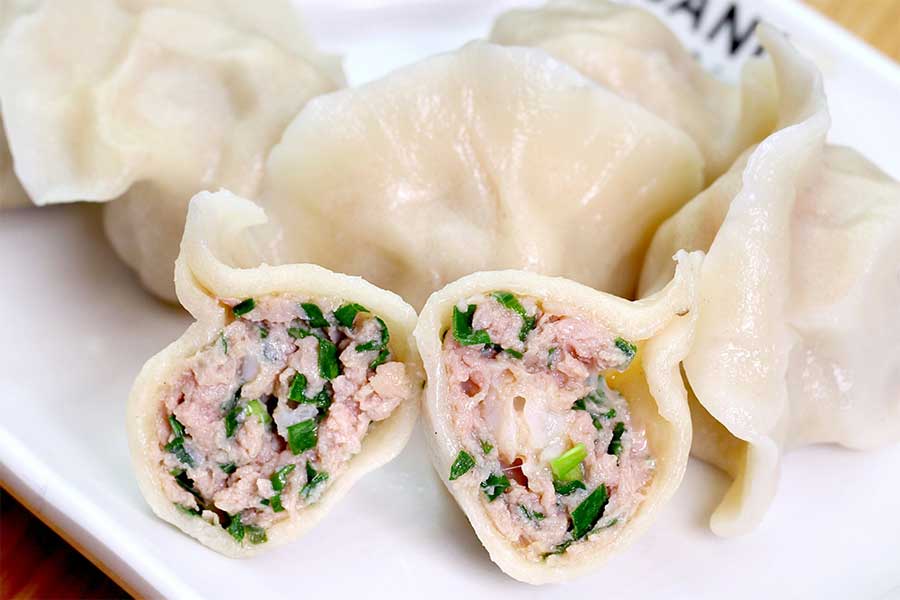 Find out more about Xi Home 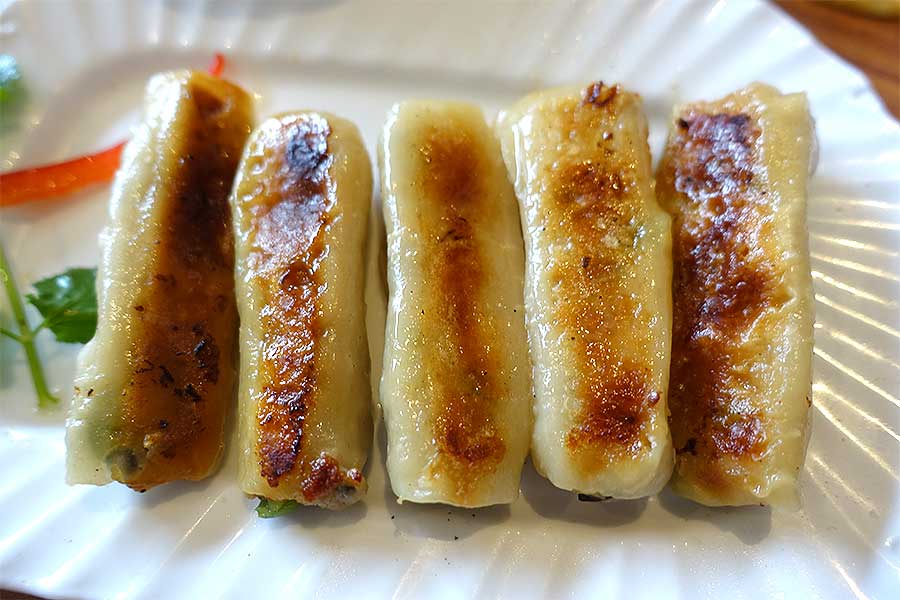 Best known for their biang biang noodles, this unassuming spot opposite the Emirates stadium also turns out excellent open-ended potsticker dumplings. Our tip - go for the chicken and mushroom option.

Find out more about Xi'an Impression 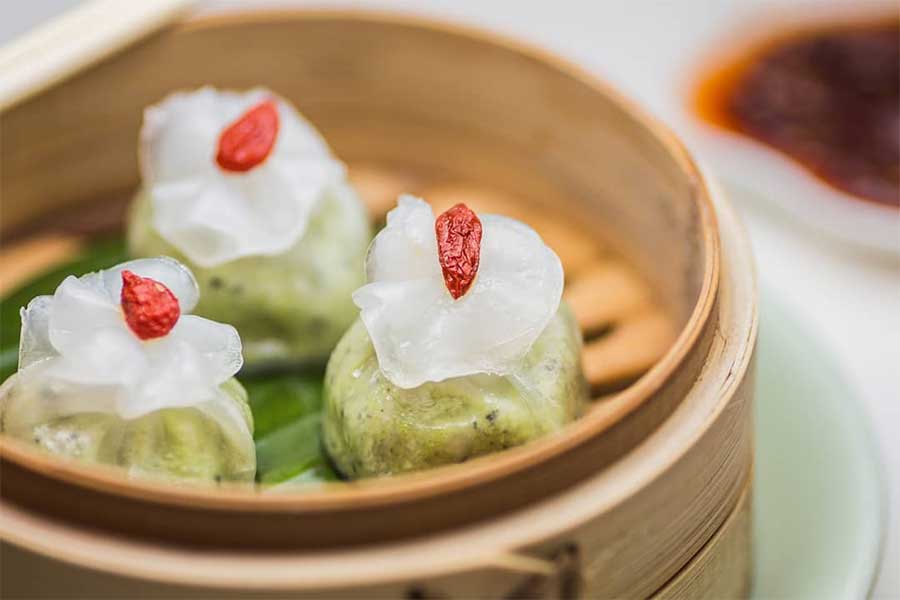 This Cantonese tea and dumpling house has two branches - the original in Soho, and the larger spot in Broadgate in the City. All the dumplings are very good, but the veggie options are worth seeking out, particularly the edamame and truffle dumplings.

Find out more about Yauatcha