What better way to lift your spirits during lockdown, then receiving a parcel of truffles, ganaches, caramels or single origin bars? 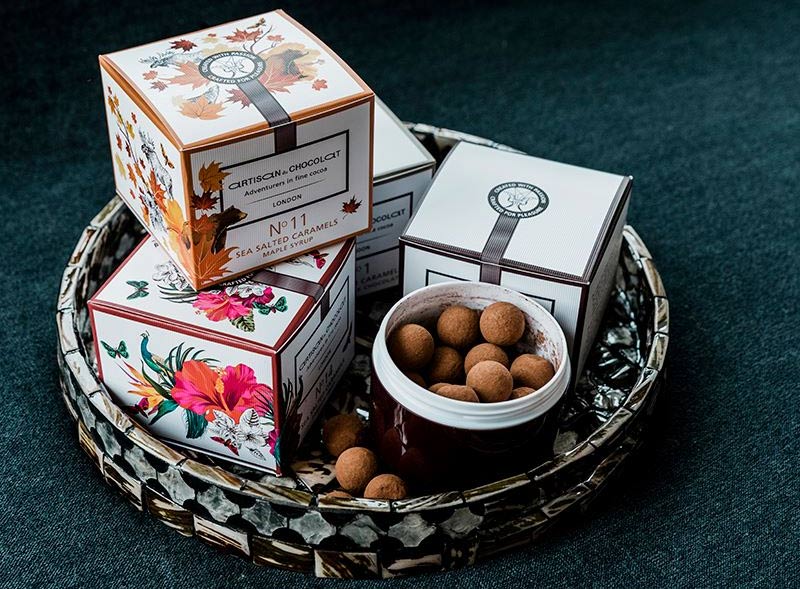 Based in Kent, but with four London locations including Borough Market, this longstanding chocolatier sources most of its cocoa from South America where they work with small scale farmers on sustainability and training. Their original "Salted Caramels No 1" were created for Gordon Ramsay at Claridge's and their latest iteration - Unami Salted Caramels use Welsh sea salt, Celtic seaweed and Snowdonia shitake mushrooms for an intense hit. 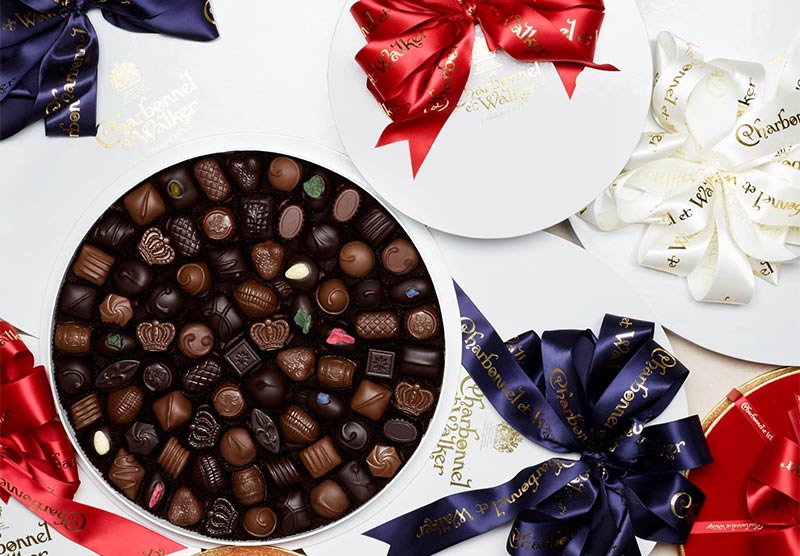 If you’re looking for a chocolatier with history, then your quest is over. This Bond Street company hails from the Victoria era and has long had royal connections, with Edward VII an early fan and the Queen a present-day customer. Noel Coward had a box delivered to his house every fortnight. Their Best of British collection includes dark rose and violet creams along with Marc de Champagne truffles or try their new chocolate-covered pistachios dusted with Anglesea sea salt. 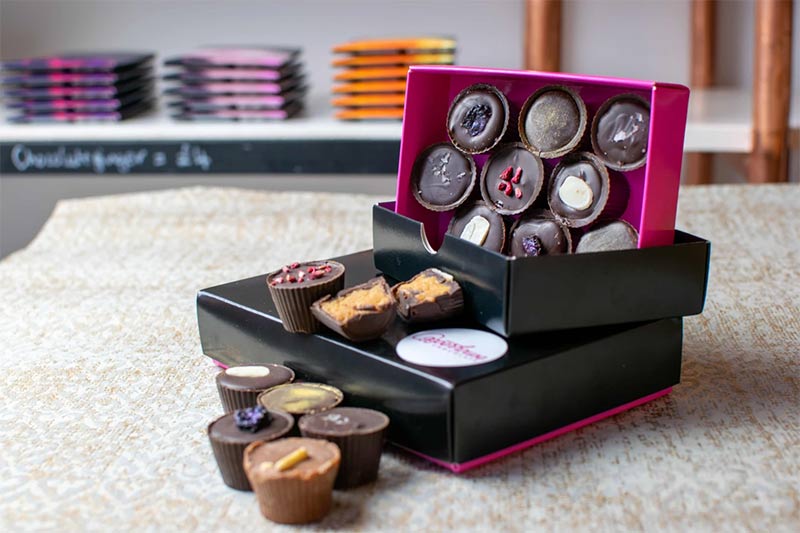 Founder Juliet Sampson is behind London’s only vegan chocolate shop and cafe. Bestsellers from this Angel-based business, which makes its chocolate on-site at their cafe on Chapel Market, are the vegan nut cups. Their single-origin hot chocolates are all sourced from Colombia, Madagascar and Ecuador. 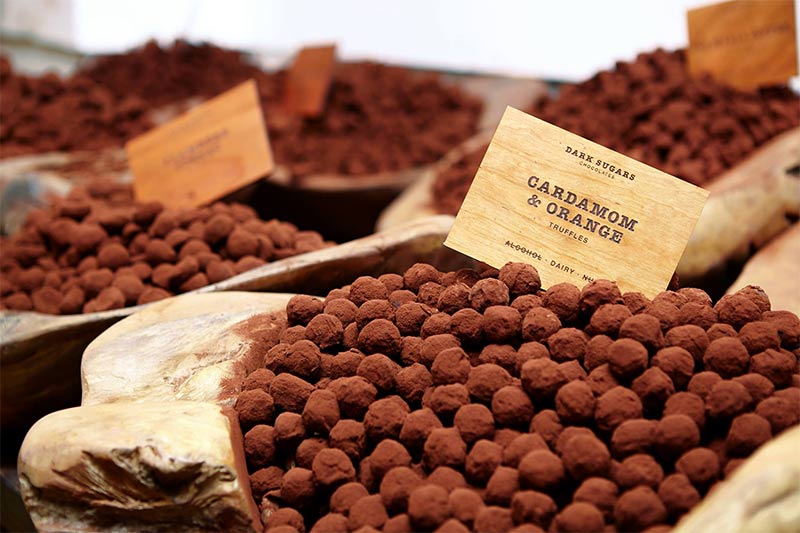 Ghanaian chocolatier Nyanga started out selling truffles at Spitalfields and Borough Market. After a three-year interlude back on the family farm in Ghana researching cocoa, she returned to London to open her popular shop on Brick Lane. Chocolates to go for here include the Malokoffs - pecans and pistachios covered in Côte d'lvoire chocolate or their Jamaican rum-infused white chocolates. 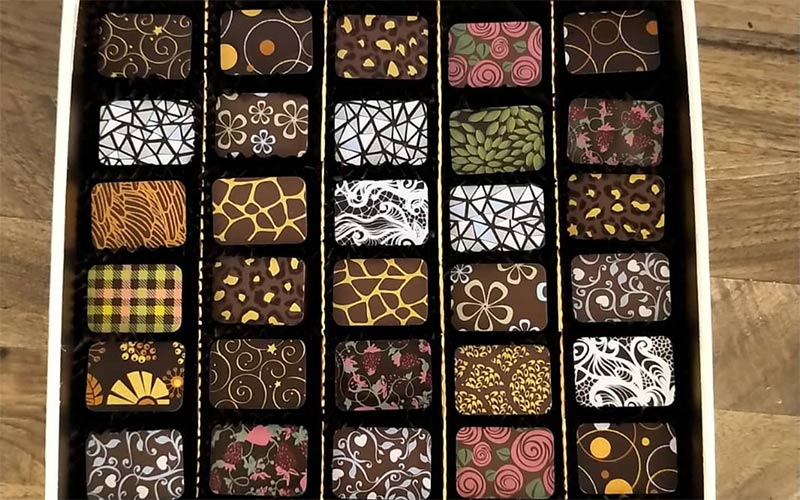 Derosier owners Andrew and Leona are those jammy sods who have actually done the thing so many of us dream of doing, jacking in the day jobs (city and civil service respectively) and opening a chocolate and coffee shop. They now have three places in South London - in Southfields, Wimbledon and Earlsfield and have won numerous Great Taste Awards. Box selections include such delights as caramel pecan, lemongrass lime and chilli and they do a nice line in vegan chocs too. 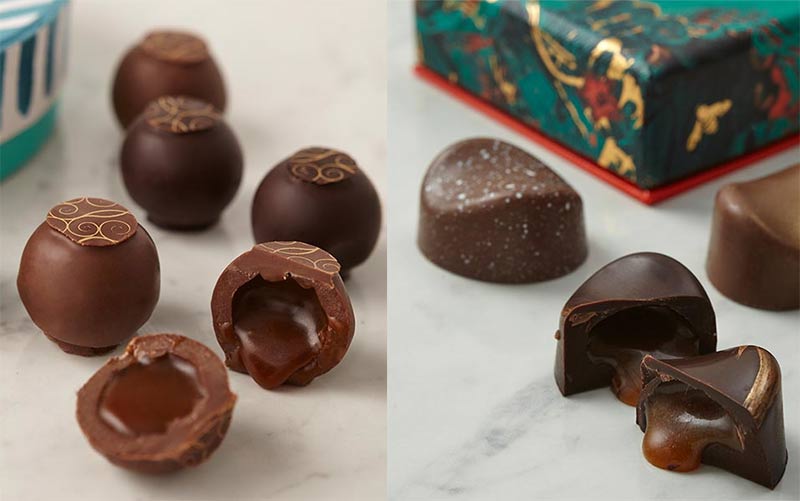 You’d expect to have a wonderful selection of chocolates at Fortnums and you wouldn’t be disappointed. The Piccadilly grocer has all sorts of classics, including violet creams and truffles, but they are also innovators. Their new ruby chocolate comes in bar, truffle and hot chocolate form and they’ve recently launched a caramels selection, all made in England and with fillings like heather honey or Burlington Arcade marmalade. 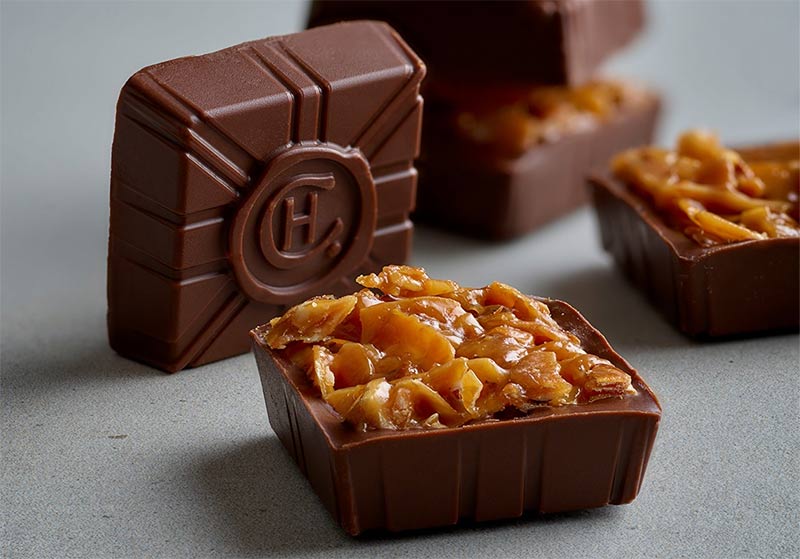 From their first store in Watford, the Hotel Chocolat now have an empire spanning their Rabot cocoa estate in Saint Lucia to a restaurant in Borough Market. They pride themselves on innovations like the first single-côte chocolate and their own chocolate genre, Supermilk. Their rare and vintage range allows you to taste the unblended chocolate as it changes from year to year or you could just opt for a slab of their cornflakes and milk chocolate. 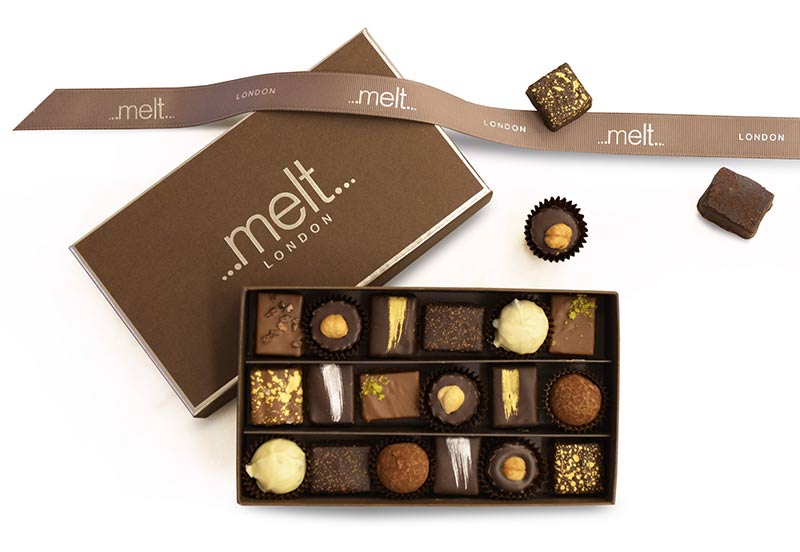 West London-based chocolatiers Melt go to great lengths to source their cacao - the one used in their wild bars is harvested from unfarmed trees in the Amazon by the Chimane Indians. Back in London, their brownies and sea salted mud pies are heavenly while their orange slices dipped in dark chocolate surely count as part of your 5-a-day. 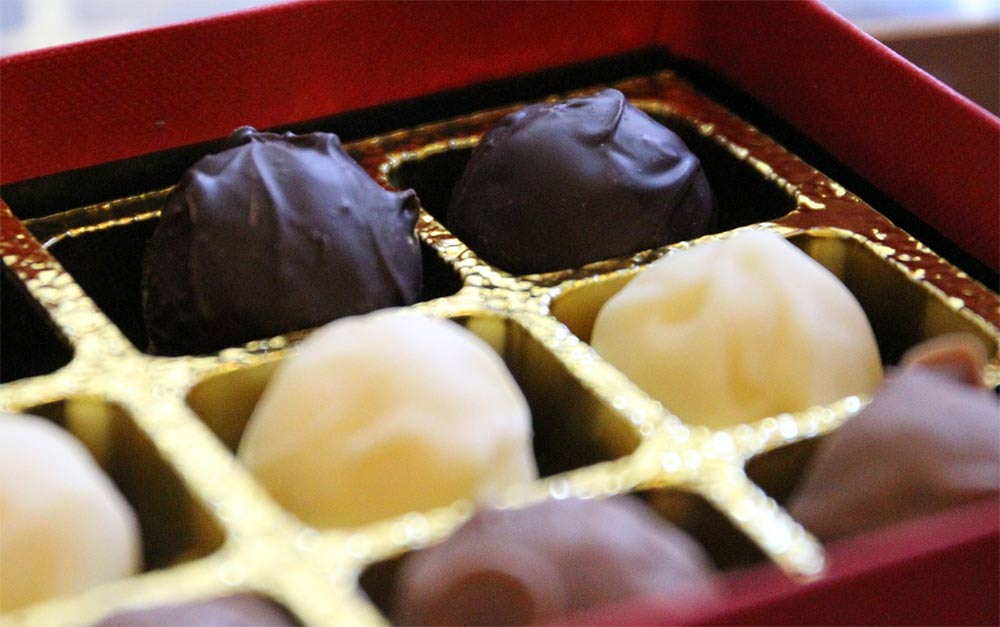 Parisian chocolatier Isabelle Alaya has been at the forefront of Peckham's artisan food world for more than a decade. She's also the brains behind the founding of The Chocolate Museum in Brixton. At her store on Maxted Road, she runs workshops and tastings. From her online shop, you can order her bars with unusual flavour pairings like coriander and grapefruit or cumin and mint. 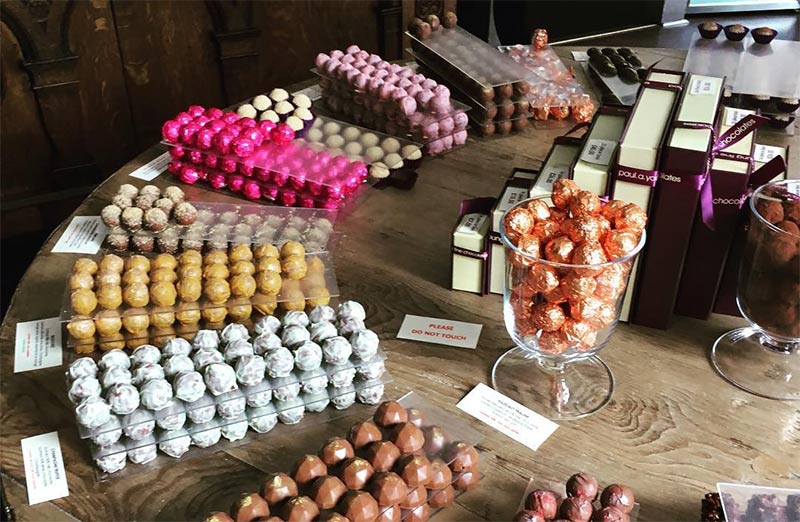 TV favourite Paul A Young came up through the restaurant ranks, working for Marco Pierre White at Quo Vadis and the Criterion. He opened his first shop in Islington's Camden Passage back in 2006 where he quickly developed a fan base for his original recipes. Chocolates change seasonally, but you'll usually find bestsellers like Paul's Marmite truffle and his multiple award-winning sea-salted caramels.

More about Paul A Young 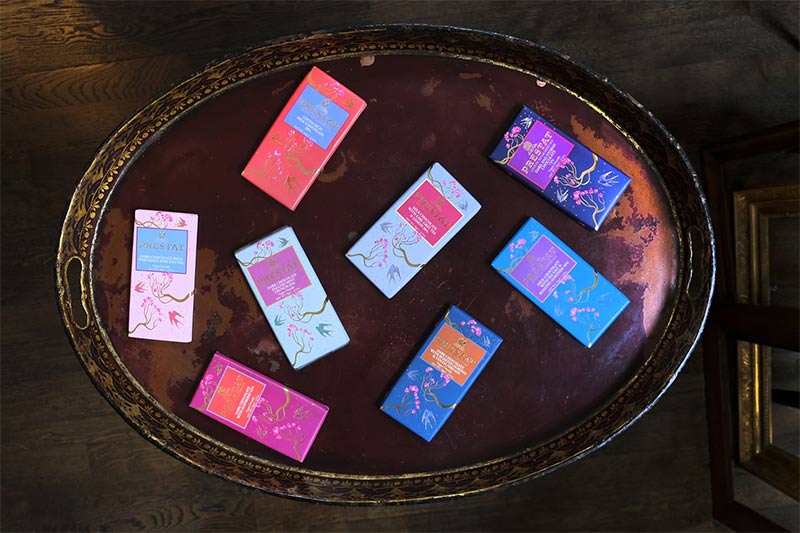 Prestat has been in London since the turn of the last century when it was founded by Antoine Dufour, whose family lay claim to having invented the chocolate truffle. In the 50s it developed quite the arty following, including Dame Peggy Ashcroft and Roald Dahl - maybe it helped inspire Willy Wonka? Today, truffles are still a mainstay of their business, but they've branched out flavour-wise with London Gin and Tonic and Champagne versions too. 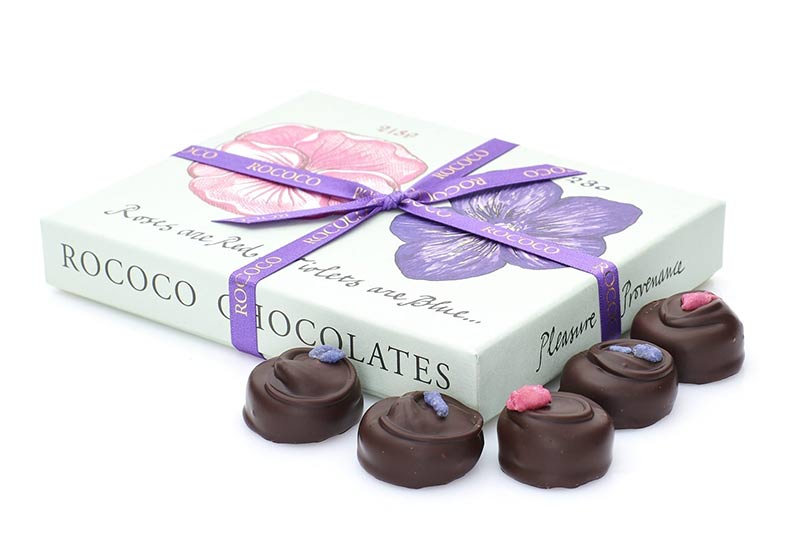 A mainstay of the King's Road since the early 80s, Rococo makes much of its ethical sourcing and heritage. Like the fashion world, their couture collection changes seasonally, so look out for their limited edition boxes. They also do very pretty praline quails eggs and potatoes that look for the world like the real thing. For bookworms, try their collection with the Roald Dahl foundation which includes a Miss Honey’s Honey Crunch Milk Chocolate Bar. 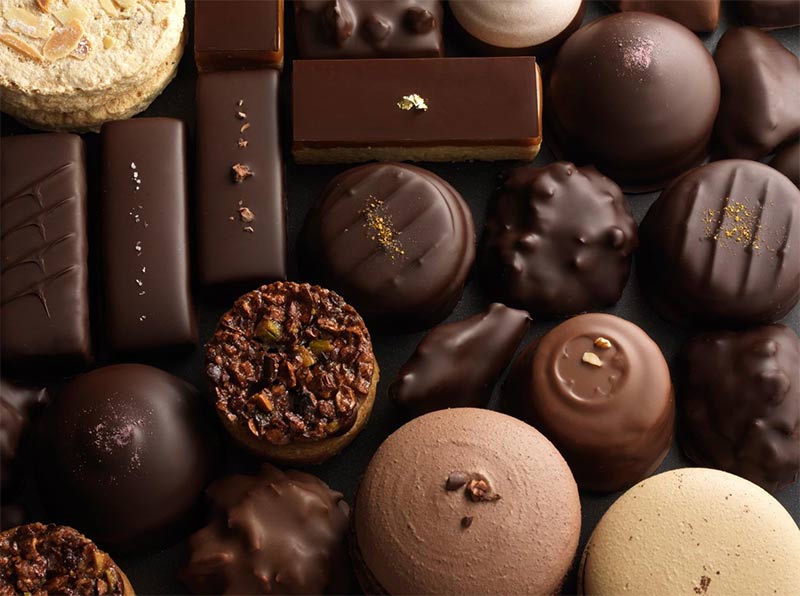 Award-winning chocolatier Wiliam Curley has trained under a slew of top bracket chefs including Pierre Koffmann, Marco Pierre White and Raymond Blanc. Before opening his first shop he was the youngest Chef Patissier in The Savoy's history. Nostalgia is a key theme in his work - with his peanut nougat and coconut bars taking old favourites to new heights. All the couverture chocolate used by him is by the artisan Tuscan producer Amedei.

More from the UK and further afield

Le Chocolat Alaine Ducasse - Ducasse’s chocolate empire focuses on ganaches, pralinés and truffles - much of it made with single origin chocolate.

Chocolarder - A former patisserie chef runs this chocolate empire from down in Cornwall.

Chococo - This Dorset chocolate company was at the forefront of Britain’s modern artisan chocolate movement.

Chocolate Trading Co - Extensive selection of fine chocolates from around the world.