Ah, beer. It really has got us through the lockdown. And while we may be missing a freshly-poured pint, the UK's craft beer industry has really proven its worth recently. So to help you get the most interesting beer delivered and let you try new things - we've gathered together some of the best online shops and subscription services as well as showcasing some of London's best breweries. 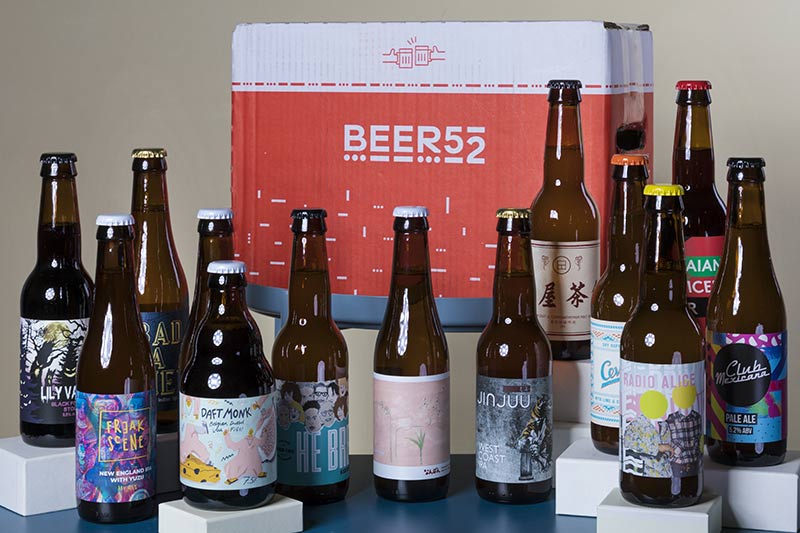 Beer 52 runs a regular craft beer subscription service of 8-10 beers. The boxes are all specifically themed (a recent one revolved around New England beers) and each box comes with a monthly magazine and a small snack. In addition to this they do online-only "Beer Fests" where they'll send you out a special selection of beers and host interviews with the brewers.

Prices from: From £24 a month (look out for introductory offers) 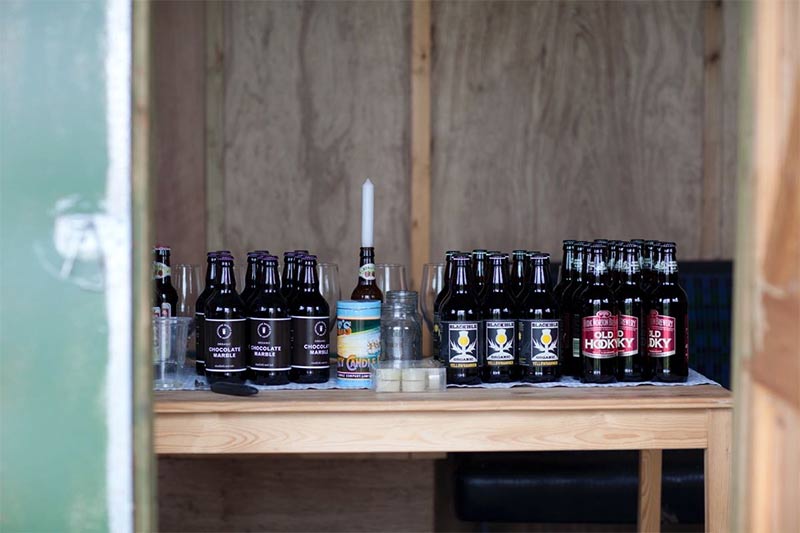 Beer Bods send out a case of 12 beers every 12 weeks - so that's a beer every week (if you can hold yourself back). Each week they'll email you the story behind that week's beer and there's also a live tasting event. 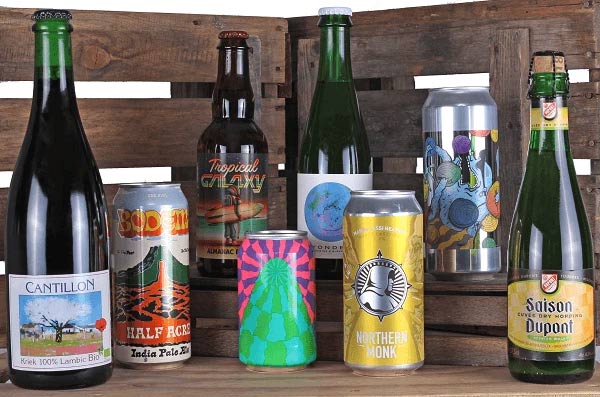 Beer Merchants have two clubs to choose from. The Fresh club offers eight beers per month, the ones delivered "fresh into the warehouse". But if you're willing to fork out a little more, there's the Premium Club where things step up a notch and you'll be getting beers which would be very hard to track down otherwise, like Belgium's Cantillon.

The Beer Merchants club and their online shop 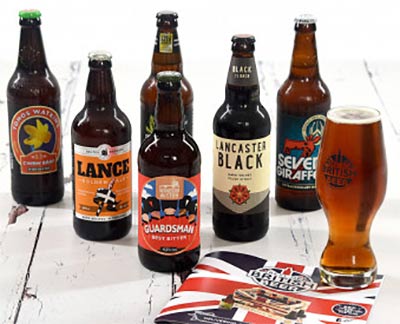 Best of British Beer does what it says on the tin, focusing on the best beer the country has to offer. They feature over 200 British producers that cover the wide range of British beer available right now. They also have several Beer Club options as well as curated cases.

The Best of British Beer club and their main shop. 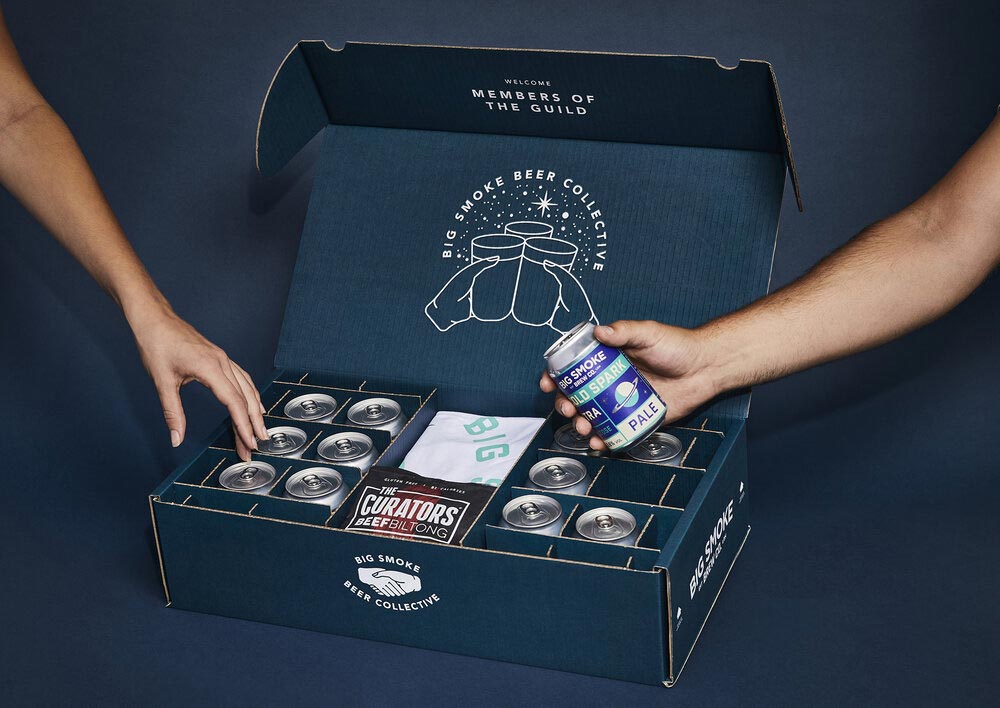 Big Smoke are a relatively new brewery that is based in Esher, as well as having pubs in Kingston, Hammersmith and more. Their Beer Collective subscription service will let you try their latest releases first, alongside a curated collection of their freshest beers (alongside a gift and snack).

More about the Beer Collective 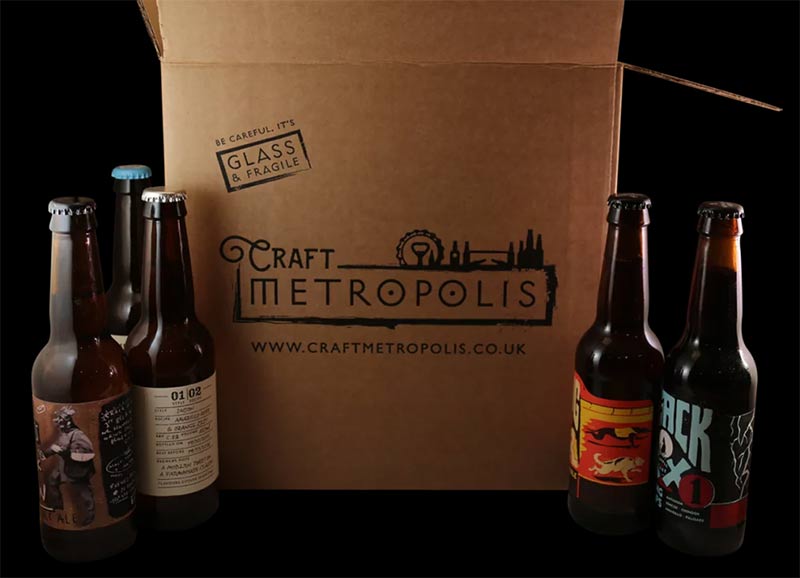 Craft Metropolis, based in South East London, have been curating their selection of craft beers since 2015 with a focus on microbreweries. Either choose the beers based on brewery or type - or try your luck at one of their mystery beers if you're searching for something new. Out of lockdown times, they also have a taproom in Penge. 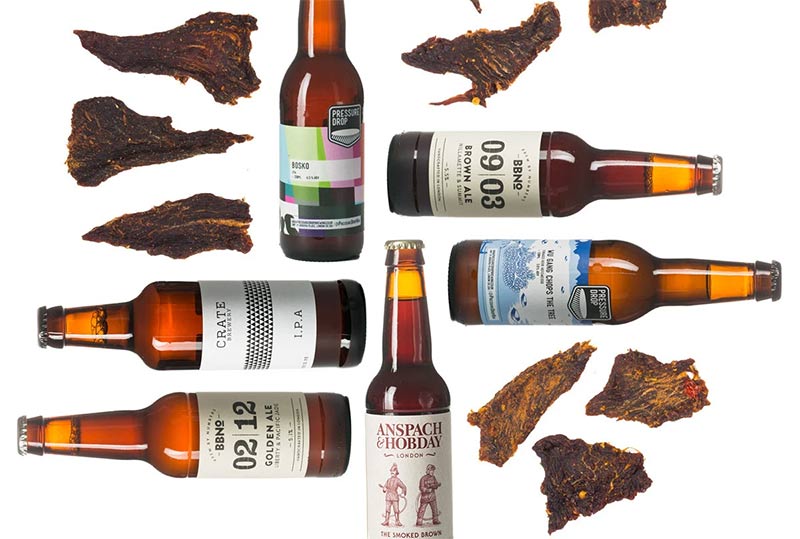 Another service that is pretty self-explanatory, Craved's beer club combines six craft beers and two packets of jerky, satisfying both boozing and snacking requirements. Individual beer boxes are available if you're looking for less of the jerky.

More about Craved Beer and Jerky 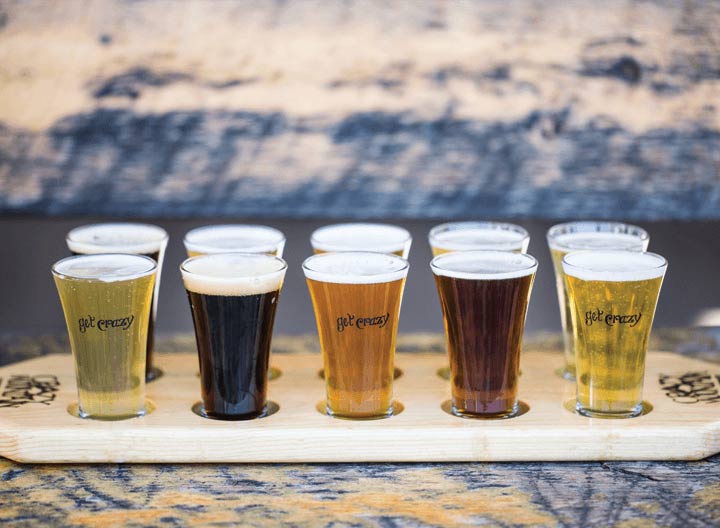 Flavourly either sell mixed or single cases of craft beer - or you can join their beer club. There you'll get eight beers per month, choosing from a light beer or mixed box,  plus a snack. Here. you'll also find exclusive beers, created through feedback from the Flavourly community.

The Flavourly club or the bottle shop 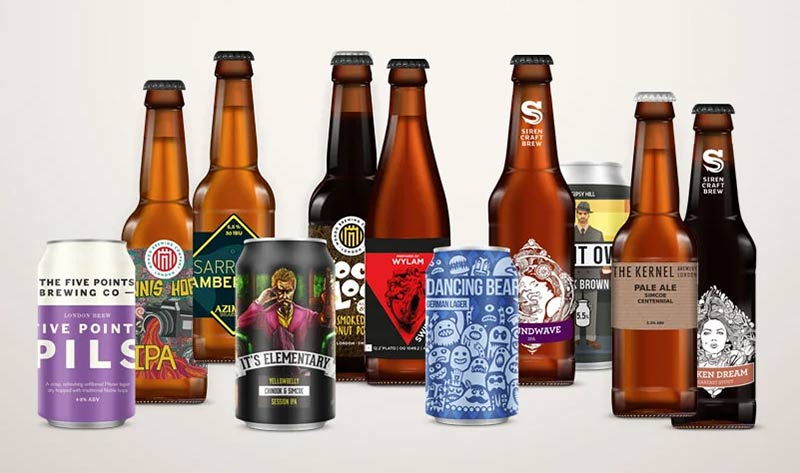 It's free to join the Honest Brew club and that will get you discounts off their range. Either head straight for your favourite beers or select one of their curated cases if you need some help. They also have a subscription service of 12 beers a month (mixed or IPA/Pale ales). 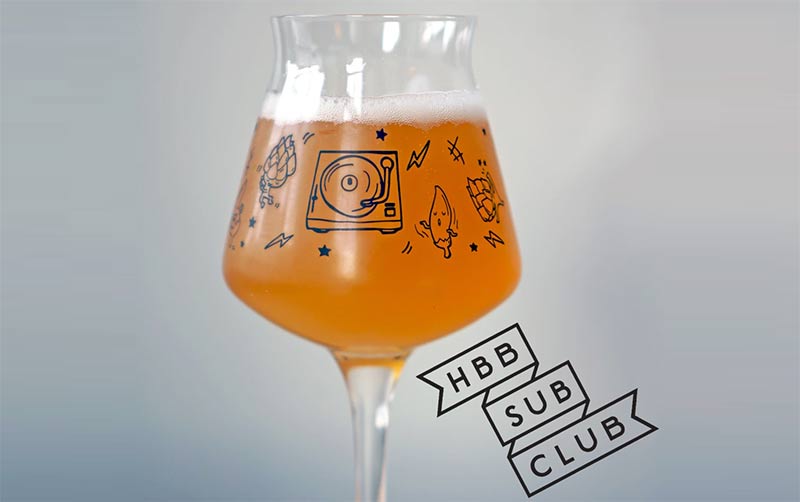 The Hop Burns and Black Sub Club features 12 beers every month in their All Killer No Filler box (and you can see past unboxings here). With each box you'll get tasting notes as well as recipes for food pairings. You could even pair this with their hot sauce subscription box. Individual beers and beer cases are available too.

More about Hop Burns and Black 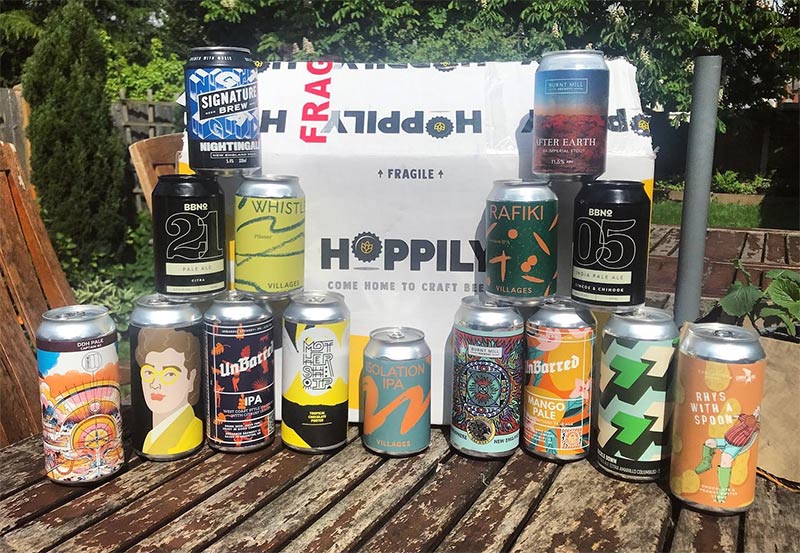 The Hoppily beer club is either beer only or you can add an "artisan snack" into the mix. All beers are from independent producers and you'll also get a discount on individual beer orders. Plus - you'll get an extra beer on your birthday!

London's craft beer industry has exploded over the past few years. Here are some of the most renowned breweries in town, most now delivering their beer right to you.

40 Ft Brewery (Dalston) This container brewery has had to close its taproom and brewery, but they still have beer available. They’re offering 5-litre mini-kegs for £35.

Beavertown (Tottenham) All of Beavertown's beers can be bought here, including the limited edition Staycation Pale Ale.

Brick Brewery (Peckham) Based under Peckham Rye station, online you can get their foundation range and keep an eye out for special collaborations.

Brixton Brewery - Coldharbour, Electric and Resistance - all their unfiltered and unpasteurised beers are available. Plus art prints too!

Crate (Hackney) - You may not be able to have a canalside beer at the moment, but all Crate's cans are available for delivery.

Five Points (Hackney) - bottles, mini casks and cans are both available for delivery, with their Pale, XPA, PILS and JULA all available. £1 from every order goes to a good cause.

Fourpure (Bermondsey) - Inspired by the West Coast USA brewing scene, all the range is available online including their larger 440ml options like Coastline and Star City.

Gypsy Hill (Norwood) - Starting small in 2013, they now have a taproom and a bar as well as a much larger operation. Their core range is available online as well as the pack which supports the "Buy the NHS a pint" campaign.

The Kernel (Bermondsey) - One of London’s original craft beer merchants offers both collection and delivery all across the UK.

Hammerton (Islington) - All beers are online including some specials like the Crunch peanut butter stout and City of Cake choc fudge stout. We're assuming they have a sweet tooth.

Howling Hops (Hackney) - They kicked off in Hackney with brewpub The Cock on Mare Street before starting a much bigger taproom in Hackney Wick. All their beers are available in a 7 can pack.

London Fields - Now owned by Carlsberg, they remain one of London's most popular.

Orbit (Walworth) Inspired by Scottish brewing specifically, their beers follow the European tradition. Look out for their White Label one-off releases every month.

Redemption (Tottenham) - One of the earliest London breweries, as well as mini-kegs, they also produce beer as 3-litre bags in a box. Ideal for the fridge.

Sambrooks (Wandsworth) - Set up in 2008, it's one of the founders of the London brewing scene and among the largest (they recently took over one of the oldest brewing sites in London).

Signature (Walthamstow) - Given that heading down to the pub isn’t an option right now, East London’s Signature Brew have launched their ‘Pub in a Box’ - a collection of 24 beers, a beer glass, pub snacks, beer mats, a playlist and, to top it all off, a music quiz. Friday drinks sorted.

Two Tribes (King's Cross) - As well as a strong beer selection, Two Tribes even have their own soda and coffee.

More places to get your beer online

Beerwulf - They have over 600 beers available, and sell kegs that fit the special Krubs draft beer pourer. Which we now want.

Biercraft - formerly serving the industry, they're now selling craft beer to the public

Exhale Brewery in Walthamstow are now delivering their pale ales, lagers and stouts.

Villages Brewery are doing free delivery south of the river. Details on how to call are on their Insta feed.