Anti-Valentines: where to go in London on Valentine's Night if you're single 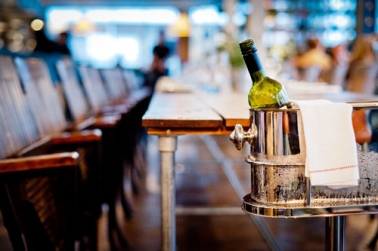 Does a little bit of you die inside every time someone mentions Valentine's Day? Maybe the very idea of eating in a restaurant populated entirely with other couples sounds like something only a crazy person would do?

Or maybe, you're just not given to PDA and would prefer to go out for a romantic meal when you want to and not when the greeting card industry says you should? "It’s a good night to avoid restaurants," Fergus Henderson told us a few years back. "I find it bizarre that everyone has to be told to take their loved one out for supper on one night. It doesn’t work for me – I’m an old, unromantic chap."

Whatever your current relationship status is, we have some ideas for going out on Valentine's Day which don't feature rose petals, pink champagne, sharing dishes for two and where there's absolutely no chance of encountering oyster platters or roaming violinists.

Happily there are loads of great places in London where you won't look out of place eating out on your own - or where they'll welcome groups with open arms. For communal tables there's the Sharing Table at Riding House Cafe, where the cocktails are always excellent - or how about the long table in front of the pass at Casa Negra? We also like the communal table at Pizarro too. For a more relaxed evening, head downstairs at Nopi where it's all communal dining.

The other alternative is counter dining. And London is happily blessed with loads of great places for you to perch on a stool, chat to the folk behind the bar or watch chefs in action. Any of the following places would do the trick:

"I wouldn't mind meeting someone new"

Head to Le Pain Quotidien at Borough Market where on 4 February they're holding a speed baking and dating evening. Each girl is paired with a boy and every 10 minutes Didier Tayoro, chief baker at LPQ and host of the class, will prompt each boy to move to the next girl to continue the baking and the wooing. Email bakingclasses@lepainquotidien.co.uk to book.

Over in Shoreditch, dating website www.doingsomething.co.uk is organising a night of fun on Valentine's night at Swingers crazy golf venue. Everyone has to swap golf partners after the fifth hole and afterwards there's pizza from Pizza Pilgrims and burgers from Flipping Cow. The dancefloor is then open till 1am. Tickets are £11.

For one night only the pop up Broken Hearts & Promises sounds like it's for you. Over five rooms in a Bloomsbury townhouse on Valentine's Night enjoy a Lulu Guinness kissing booth,a Lanique Rose Liqueur Lounge and bars serving up everything from Greedy Pug cocktails to cheese and jalapeno toasties. Ticket are £15 and for an extra tenner you can take in Tarantino's True Romance at the Broken Hearts Cinema. Book your ticket to Valentine's Night fun here.

Alternatively, head to Source where they're holding an Anti-Valentine's pigout. Head downstairs at the Battersea restaurant to a room once used as a warehouse for storing ice. On 14th February the 'Nose to Tail' menu will feature all things piggy from in-house cured ham to crispy ears, slow cooked shoulder, juicy leg and crispy crackling. There'll be music and communal tables - none of that table for two nonsense. 40 tickets are available for £35 which includes three courses and a cocktail on arrival. To book call 020 7350 0555 or email info@sourcebattersea.com

Then we can wholeheartedly recommend heading to Islington gastropub The Drapers Arms on Valentine's Day. "I’m not that comfortable ringing the tills in the name of mens’ love for women on the 14th of February and turning a blind eye the rest of the time to mens’ collective acts of violence against women," writes publican Nick Gibson on the pub's blog. He's giving all the pub's takings that day to the charity Refuge;  "Because we should all feel loved and especially on Valentines."
Drapers Arms, 44 Barnsbury Street, London N1 1ER