London restaurants for the Royal Wedding

If the thought of the impending royal nuptuals has you unfurling your union jack bunting rather than fleeing the city, then you'll be wanting somewhere great to eat to celebrate the royal union.

We've picked the best restaurants in London for their right royal connections or closeness to the wedding route.

The best place to see the flypast 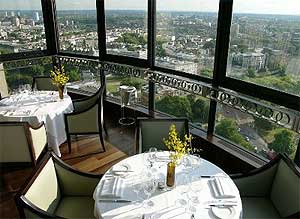 There couldn't be a more perfect spot to watch the day's events unfolding than Galvin at Windows. Watch the wedding reception unfold at Buckingham Palace from the plate glass windows overlooking the Queen's garden - plus you're perfectly placed to see the RAF flypast just after 1.30pm.

The restaurant is offering a special Royal Menu for lunch from the 26th to 28th April and lunch and dinner on the wedding day.

What to order: The £45 royal wedding menu (restricted so book early) with coeur de passion for dessert.

The nearest to the wedding route 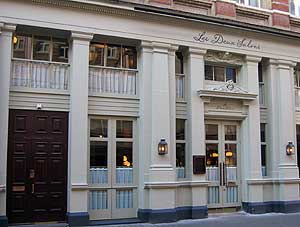 Having spent the morning braving the crowds down the Mall, hoping to catch a glimpse of the couple as the coach takes them back to Buckingham Palace once the deed is done, you're probably not going to want to walk far.

So double back down the Mall, across Trafalgar Square and slip into a banquette at Les Deux Salons for something restorative.

What to order: Duchy of Cornwall native oysters of course. 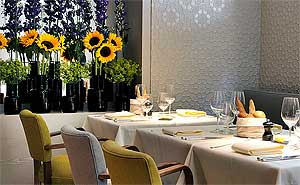 Pierre Koffmann's Berkeley Hotel restaurant is where Camilla took Kate Middleton for a ladies' lunch to go over what she can expect from marrying into the royal family.

What to order: If you'd like to do the freaky royal stalker thing, happily The Daily Mail found out, allegedly, the exact food Kate ordered: so go for the terrine of foie gras with baguette, followed by sea bass with fennel and black olive sauce and Koffmann's famous pistachio souffle with ice cream for dessert.

The most historically accurate menu 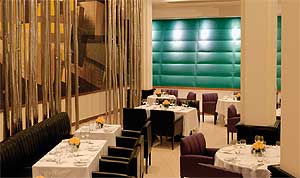 Executive Chef Tony Fleming has looked back at four previous royal weddings to come up with a Royal Wedding-inspired menu to be served in the hote's Axis restaurant from April through mid May.

What to order: Quenelle of brill in lobster sauce from Charles and Diana's wedding.

The restaurant where all the action is 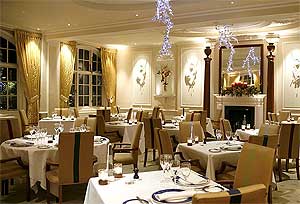 As one of the closest restaurants to Buckingham Palace (and one used regularly by The Queen), the Goring is also the place where Kate Middleton will stay the night before the wedding.

The dining room (and hotel) is closed over the Royal Wedding weekend, so you'll have to dine here either side of that to get the thrill of being so close to the action.

The Botanist on Sloane Square and Cadogan Arms on the King's Road are both offering a free meal to the first Kate and William to come through their doors together (but you can be friends not partners) on the 29 April.

Cinnamon Club, one of the closest restaurants to Westminster Abbey has a special five course Royal Wedding menu on between 25-30 April for £50.

Covent Garden's Moti Mahal is putting on a fusion Royal Afternoon Tea between 25-29 April including cardamom scones and chicken tikka and coriander chutney sandwiches. Tea is £18 or £25 with a glass of champagne.

The Ritz is putting on a royal wedding brunch with, if the weather holds, a grill on the terrace overlooking Green Park - you'll be able to hear the crowds cheer from there. For £150 you'll get a glass of champagne for toasts to the royal newlyweds and some rather posh souvenirs, and the breakfast of course.

Oxo Tower brasserie also has a Royal wedding breakfast including quail egg Benedict, toasted mini bagels with smoked salmon and scrambled egg, hash browns with sausage, pastries and exotic fruits. For those in the party mood they'll also be mixing up bucks fizz and bloody Marys for £45.

Fortnum and Mason are hosting a special lunch on the day, with Highgrove produce on the menu, from 10am to 2.30pm and you'll be able to watch the whole event unfold on their big screens.  Cost is £75 a head.

Sketch is hanging out the bunting on their building and will have a large cut-out of William and Kate on the roof.  They'll also be showing the royal wedding on their 360 degree screens while you scoff on afternoon tea.  After the event they'll be "throwing the bouquet" where the winner will get a private dinner for four at Sketch.

Eighty-six, apparently Kate's favourite restaurant in Chelsea, will be open from 10:30am serving a champagne breakfast for £35 while you watch the wedding unfold on their big screen.

Rousillon is holding a special wedding day brunch for £37.50 followed by a Wedding Breakfast that evening for £65 for five courses including a glass of champagne. Dishes include Salcombe cock crab with mango, pink grapefruit and coriander and Rhug estate lamb with red pepper, courgette and basil.

Aldo Zilli will be undertaking a marathon 24 Hour cooking session at Zilli Fish on Brewer Street starting at 6am on the day of the wedding.