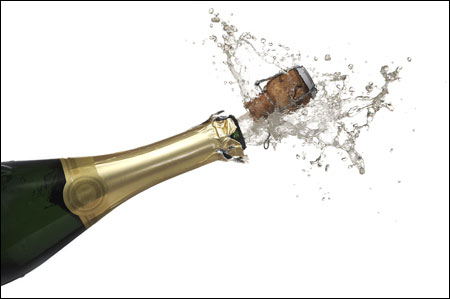 2009 has been a huge year for Hot Dinners, not least because it's the year we launched. Over the last eight months we've interviewed everyone from Marcus Wareing and Bjorn van der Horst to Fay Maschler and Richard Corrigan, gone on a Gourmet Odyssey, broken exclusive news on restaurant openings, oh and eaten out rather a lot.

It's been an interesting year on the London dining scene, not least as restaurateurs began the year by trying to ride out the recession. Some didn't make it (RIP St Alban and Cha Cha Moon) but we hope those who did learnt the lesson that Londoners have become demanding diners. For example, there's no point putting a chef's name over the door if the food isn't going to come up to scratch and you can come up with a zany idea, but do diners really want opera as they eat?

Overall, we think we've seen an improvement in service and value for money, but let's hope it lasts.

Normally, it takes a few months for all the critics to get around to seeing new openings. But not when it comes to Mark Hix's latest, Hix in Soho. Before the month was up, over 10 of the capital's best critics were rushing to get their opinions into print or online, with only Marina O'Loughlin's review deviating from the litany of praise. It was a similar case with Polpo - this time even Marina broke her own rule of not racing to review by going during the restaurant's soft launch period.

We've noticed that, every year, some restaurants get rave reviews from a few choice critics, yet somehow avoid the gaze of others. This year, most reviewers missed out on Nuno Mendes' The Loft - which got rave reviews from both the Standard and the Metro. Now we know it's essentially "just" a supperclub, but we're surprised that more critics didn't make the visit, given those raves. We expect Nuno's new restaurant Vijante to be getting much more attention when it opens in 2010. Elsewhere, Lolo Rojo didn't get many top reviewers in, but we'd be surprised if their recent turn on TV's The F Word didn't grab the attention of a few more London critics.

While most of us would view a bad meal as a rubbish night out, for restaurant critics such evenings are manna from heaven. After all, it's much easier to rain down imaginative invective on a poor dining experience than it is to come up with yet another way to describe a delicious dish. Better still, they haven't wasted their own money. Reviewers certainly weren't impressed with with either the new Planet Hollywood or Marco Pierre White's Steakhouse and Grill, however it was Two Twenty Two at The Landmark which generated the most bile from the critics.

Here are some of our favourite bad reviews of the year.

'This is bad from a bad place where the bad people live.'
AA Gill on The Chicago Rib Shack

'And say hello to the world's least exciting menu: so safe, it's the kind of stuff you find in the gastropub aisle of your local supermarket... And the food: crikey. A catalogue of hideousness washed down with the kind of rosé that costs three for a tenner at a petrol station.'
Marina O'Loughlin on Twotwentytwo

'On paper my salad of Broccoli, Boiled Egg, Dandelion and Berkswell cheese didn’t sound too shoddy but that’s where it should have remained: on paper. The Broccoli was overcooked, the Egg white undercooked and there was some unadvertised, overdressed leaves that made the whole a soggy mess.'
Dos Hermanos on Whitechapel Gallery Dining Room

'It is said about over-salted food in a restaurant that smoking may have blunted the chef’s palate. Based on [our food] the chef must have a 60-a-day habit.'
Fay Maschler on Chinese Cricket Club

'A paradigm of such bewildering ineptitude that it would beggar belief if you chanced upon it in rural Bulgaria, let alone in so ferociously competitive a foodie market as central London?'
Matthew Norman on Kettners

'Some of what we ate...was unidentifiable as anything designed for human consumption, some... seemed on the verge of fermentation.'
Fay Maschler on Serpentine Bar and Kitchen

'It's like eating food that has been sat on by a very fat man for several days.'
Marina O Loughlin on Planet Hollywood

'Almost everything we ate was awful in that "someone must be punished" sort of way.'
Jay Rayner on Marco Pierre White Steakhouse and Grill

'The best I can say for my monkfish is that the repulsive, overpowering black olive mush that covered it like a widow's shawl diverted attention from the fish's texture. It takes something special to overcook this meatiest of piscines until the favourite in a blind tasting is "essence of fish blancmange", while the spinach that came with it may have spent longer in steam than my friend and I have aggregated in a decade at our beloved Turkish baths. Broccoli had more salt than the crab, and lukewarm fat chips were better suited for planing wood.'
Matthew Norman on Time and Space at the Royal Institute

'I started with an egg yolk in jelly; it was like a big wine gum of pus, only not that nice. It was cheek-puffingly foul.'
AA Gill on Aqua Nueva

'The rather beautiful rear dining room – formerly the only obvious real attraction – has been turned into something like a high-class S&M parlour: all blood red walls, and kinky B&W photos.'
Hardens on Wheeler's

'Perhaps our meal was an early-days aberration. But as one dish succeeded another, it all began to seem too consistently ill-conceived and heavy-handedly executed to be just a chapter of accidents. The Luxe has been long in preparation. But if this really was the food that Torode wants to serve, then the idea that he has a starry career on TV assessing the cooking of others is a bit of a joke.'
David Sexton on The Luxe

It may be harder to find ways of transporting readers to the heavenly delights of a good meal, but London's reviewers have found their way to letting us know when they've enjoyed a fine repast. Of the places that actually opened this year, the clear front-runners were Hix in Soho, which opened to rave reviews (more of that in a minute), and Dock Kitchen which particularly impressed the notoriously picky Fay Maschler and Jay Rayner. But one restaurant which opened in December 08, the popular Italian Bocca di Lupo beat them both to be the best reviewed restaurant in 2009.

Here's our pick of some of the critics' finer dining moments of the year.

'The last time I ate such gentle trofie pasta with green beans, potato and pesto (£6), such spiky puntarelle with anchovy (£5.50) and such perfectly cooked cime di rapa greens (£4), I was in Liguria, Rome and Puglia.'
Terry Durack on Bocca Di Lupo

'Kevin Gratton, previously of Scotts, has everything under control. This is the same Gratton who Gordon Ramsay once described as ‘an exceptional cook’ – and we agree...If you’ve been wondering where Cool Britannia went, it’s moved to Soho.'
Guy Dimond on Hix

'I’d call Indian Zing a find, but it has quite a pedigree. The chef, Manoj Vasaikar, has cooked in every classy Indian restaurant you could name, from Veeraswamy to Chutney Mary. He’s brilliant, and this unassuming place – unhurried and great value – is the perfect place to be quietly dazzled.'
Zoe Williams on Indian Zing

'It's less like dinner and more like a kind of drug-induced happening. How the hell does the charming, self-deprecating Nuno do it?... we reel into the street, dizzied by what we've experienced.'.
Marina O'Loughlin on The Loft

'There is far more to a cracking restaurant, of course, than what its kitchen churns out, and by every criterion Corrigan's is a triumph. The service is magnificent, the pricing policy carefully calibrated for these challenging times and the place is well designed to entice you to linger.'
Matthew Norman on Corrigan's

Possibly one of the most indulgent yet delicious accompaniments you are likely to get in any restaurant, anywhere, was a small cottage pie which had been made with an oh-so-rich mixture of Venison meat and its offal. Believe me if it was any better it would be illegal.'
Dos Hermanos on Corrigan's

'The food is tastier than one of those young lovelies President Sarkozy wants in his cabinet. The wonderfully weighted menu of chef and co-owner Ed Wilson lets you nibble or gnaw, snack or stuff. Purely for you, dear gastronome, I leave waddling like a duck limbering up for a foie gras festival.'
Jasper Gerard on Terroirs

Your thoughts:
What were your low and highlights eating out in 2009? Talk about it on our forums here.