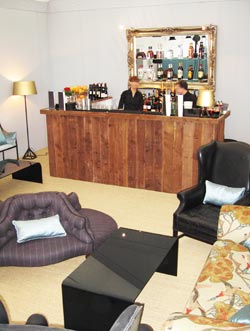 As the inaugural London Restaurant Festival was launched, the must-have table at the event was in no question. Pierre Koffmann was to recreate his three Michelin-starred restaurant, the Tante Claire, on the rooftop of Selfridges. The original Tante Claire, whose Hospital Road site was taken over by Gordon Ramsay's own eponymous 3 Michelin-starred restaurant, closed 7 years ago when Koffmann decided it was time for him to leave the restaurant business.

The instant word of his return got out, bookings for the intitial two-week period sold out, encouraging organisers to extend the slot for a further week to the end of October. Hot Dinners hadn't had the pleasure of dining chez Koffmann when he was in charge at Hospital Road, Chelsea, so it's fair to say we were pretty excited when we scored a table for lunch on the second day of his stint at Selfridges.

We can say is that this was one of the most enjoyable meals we'd had this year.

The lunch started well, as the organisers had gone that extra mile to make it look really special by allocating an elevator in Selfridges to whisk you direct to foodie heaven on the fifth floor. Upon reaching our destination, we thought we were still inside Selfridges until we realised we were in a tented village on the roof of London's key department store.

Looking out over the southern part of central London, the Koffmann restaurant literally clings to the roof of Selfridges with lots of thick rope. The canvas roof billows in the wind, with the faint billowing sensation adding to the pop-up feel.  Although there were apparently some leaks on the first night, we hear they've been dealt with, and all the staff seemed as excited as the patrons to be involved with the enterprise.

The whole thing looked like the VIP section of a summer festival but with much, much better food, and one hell of a view.

Every diner has to choose from a three-course tasting menu costing £75 - and while the specials may change over the next few weeks, we understand the menu will remain much the same.  But, given that we would be more than happy to return to the restaurant to take up anything on the menu, diners will be spoiled for choice. 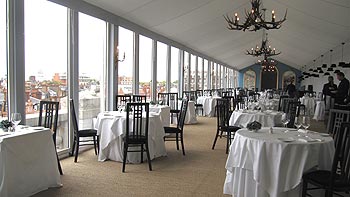 All the staff were recruited specially for the event - the sommelier features five years at Gordon Ramsay and Marcus Wareing at the Berkeley under his belt. But we particularly appreciated the ministrations of Claire Harrison, Pierre's partner who's a brilliant front-of-house personality and needs to be persuaded back into gainful full-time employment in this industry immediately!  When we wondered just how you put a high-end restaurant on the roof of London's biggest department store, she made it sound like the simplest and easiest project in the world.

The amuse-bouche of duck rillettes with walnut croutons set the scene for the meal - rich, tasty yet light and engaging. We followed with lobster and avocado cocktail,fois gras and potato rillettes for starters, spiced duck and rose veal for mains and spectacular chocolate mousse and pain perdue for desserts.

All in all, it's the foodie destination of the year - maybe the decade - and anyone who's booked a table won't regret it.  We just hope that Koffmann won't leave it so long before entertaining us again!

For more details and photos of our food, check out our Twitter page.

Here's what the critics thought of Koffman's rooftop venture:

Charles Campion - Evening Standard - 8/10
"It may only be what fashion would now have us call a “pop-up” restaurant, but the Restaurant on the Roof has real panache — friendly service, a lengthy wine list and, above all, delicious, well-seasoned, well-balanced, skilfully prepared food."
Read Review

Charmaine Mok - Time Out
"...more than anything it will be the evening of hospitality, bonhomie and laughter  – not to mention the thought of Pierre Koffmann smiling behind the stove, back in his element – that will give us fond memories of Restaurant on the Roof for years to come."
Read Review

And see our London Restaurant Festival feature for more details about the festival itself.