Michelin starred restaurants in London for 2014

This year, Michelin managed to keep a lid on the results with only a small preview of the Bib Gourmands the night before. London did well with two new Two Stars restaurants and nine newly starred restaurants (see our news story here and chefs' reactions to the news.)

Plus - we also ask "does Michelin matter"? 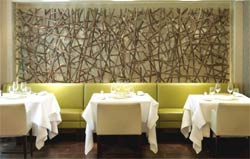 Who's the chef? Arnaud Bignon
Why it's rated: Bignon looks to combine traditional French training with contemporary techniques and he's clearly succeeded, even AA Gill concurs calling a foie gras dish he had there this year 'spectacular". An expensive restaurant though - definitely one for a special occasion meal.

Find out more about The Greenhouse 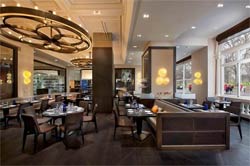 Who's the chef? Ashley Palmer Watts
Why it's rated: Any new restaurant with Heston's name on the door was always going to attract Michelin, But two years after opening head chef Ashley Palmer Watts continues to thrill with his historically-inspired menu. Obviously the meat fruit and tipsy cake will always be on, but there are new dishes too such as Frumenty - grilled octopus, smoked sea broth, pickled dulse & lovage which has had diners raving.

Find out more about Dinner by Heston Blumenthal 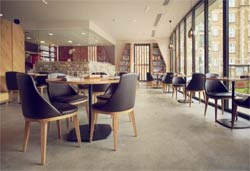 Who's the chef? Tom Sellers
Why it's rated: With just one night out of his kitchen in the five months since the restaurant opened, Tom Seller's dedication to his job has paid off. He describes his food as "British, ingredient-led and steeped in history. Simplistic in idea, yet technical in execution, with a bit of youthful fun thrown into the mix." The critics concurred with almost universal love for this Bermondsey restaurant.

Find out more about Story 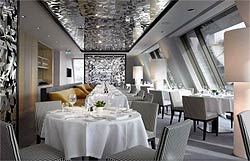 Who's the chef? Tony Fleming
Why it's rated: The rooftop seafood restaurant at D&D's first hotel, South Place in Moorgate, combines style, comfort and lovely views with on point cooking. It attracted praise from ES Magazine's critic Grace Dent who said: "It’s businessy but it has a heart, the staff are attentive and convivial, and the dessert menu is bloody superb."

Find out more about Angler 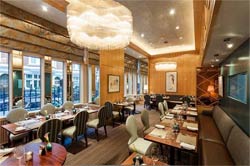 Outlaw's Seafood & Grill at the Capital

Who's the chef? Pete Wiggs
Why it's rated: Nathan Outlaw's takeover of the restaurant at the Capital Hotel hasn't perhaps gone as smoothly as planned. Many critics felt there was a mismatch between the room and style of cooking. But it's clearly pleased Michelin and certainly the restaurant's seafood couldn't be more sparkling fresh with such brilliant supply ties to Outlaw's other Michelin-starred restaurant in Cornwall.

Find out more about Outlaw's 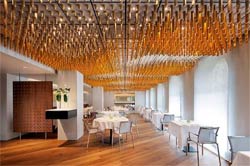 Who's the chef? Sergio Sanz
Why it's rated: This will perhaps be the most controversial inclusion on the Michelin list this year. While the original Arzak is a massive hit and in the top 10 of the World's 50 Best, this London venture received a rather cooler reception from the critics.

Find out more about Ametsa with Arzak Instruction 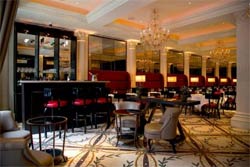 Who's the chef? Eric Chavot
Why it's rated: Marking Chavot's return to London after too long an absence, Brasserie Chavot is one of those restaurants we recommend to loads of people - it's equally great to take a date to as well as an excellent parent place. "In terms of the food, it stands alone," said Richard Vines, critic for Bloomberg.

Find out more about Brasserie Chavot 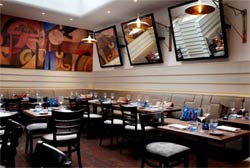 Who's the chef? Head Chef is Robert Ortiz
Why it's rated: Lima is headed up by Executive Chef Virgilio Martinez, who also owns Central in Lima (on the World's 50 Best list). Lima was at the forefront of London's new Peruvian restaurant revolution with this highly rated place that the Telegraph's Matthew Norman awarded a perfect 10 to, saying it's "a ridiculously perfect amalgam of taste and aesthetics".

Find out more about Lima 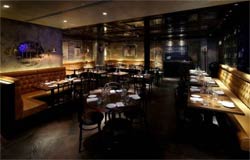 Who's the chef? Paul Hood
Why it's rated: Jason Atherton's been a very busy man in 2013, opening three restaurants - but this is the one singled out by Michelin. This three floored restaurant and bar is arguably the most casual dining place on the list, and perhaps more representative of what's opened in London in 2013 - as Metro's Joe Warwick called it "a welcome antidote to the current fashion for reheated French bourgeois classics and po-faced ‘local’ provenance." 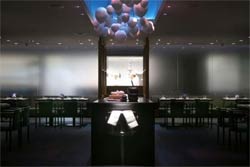 Who's the chef? Executive chef Tong Chee Hwee
Why it's rated: Hakkasan is a bit of a Michelin favourite, with the Mayfair outpost getting a star in its first year too. This is their tasting menu restaurant in the city, and it's impressed many with Giles Coren saying "This place is amazing. Fourteen of the best courses I’ve had anywhere."

Find out more about HKK 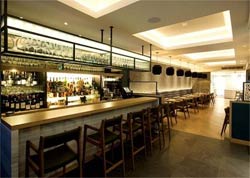 Who's the chef? Alvin Leung
Why it's rated: Bo London hasn't exactly set London's critics' pulses racing. Only the Metro's Andy Lynes has loved it: "There are numerous times during the three-hour meal when we’re stopped in our tracks by delicious flavours, unusual ingredients and breath- taking presentation."

Find out more about Bo London

Michelin's Bib Gourmand awards go to restaurants 'offering good food at moderate prices'. In London 'moderate' translates to three course for £28 or less - so that's a pretty good deal for great food.  This is also where Michelin gets the chance to reward more restaurants that aren't in the starched white tablecloth brigade. This year the new Bibs go to the following London spots: