Michelin starred restaurants in London for 2013

After two years of keeping the lid on things, this year's UK Michelin stars were leaked by Michelin themselves thanks to some overzealous changes to the Via Michelin website. Regardless of what some people think of Michelin, the publication of a new guide with its stars is one of the biggest events in the UK's restaurant calendar.

A lot of chefs, no matter what they say in public, reckon they're a big deal and they're certainly an accolade with global reach. They can also be a very welcome financial boost as newly-starred chef Mark Poynton of Cambridge's Alimentum told Big Hospitality yesterday. Just hours after the announcement of his rise to one star status, he'd already seen bookings double in a day.

This year's been a bumper year for London with eight new one-starred restaurants and another upgraded to two stars. Here's what made the grade for the 2013 guide. 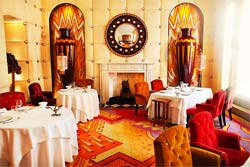 Who's the chef? Head Chef is Pierre Gagnaire
Why it's rated: The rise of Sketch to two stars was a bit of a left-field choice by the Michelin inspectors. But at least one critic was on the ball here. The Independent's Tracey Macleod visited Sketch this year and liked it a lot; "Each course is a tasting menu in itself, comprising three or four dishes, which riff on a theme then veer off into something extraordinary."
Find out more about Sketch 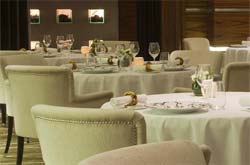 Alyn Williams at the Westbury

Who's the chef? Alyn Williams
Where is it? The Westbury Hotel, 37 Conduit Street, Mayfair, London, W1S 2YF
Why it's rated: Alyn Williams was head chef at Marcus Wareing at the Berkeley before starting out with his own restaurant at this Mayfair hotel. It quickly gained plaudits (it's been open less than a year) and we loved it too. It's surprisingly good value for haute cuisine in a posh London hotel - and well worth heading down to before they raise prices to match the new stardom.
Find out more about Alyn Williams at the Westbury 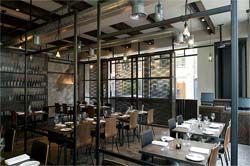 Who's the chef? Ollie Dabbous
Where is it? 39 Whitfield Street, London W1T 2SF
Why it's rated: Dabbous has been one of the biggest success stories of 2012, so it's not a surprise to anyone to see it awarded a star so quickly. Tables at Ollie Dabbous' eponymous restaurant are one of the most sought-after bookings in London and this accolade will only make one harder to get. If you can't get in to try this critics' darling, you should instead check out the bar menu downstairs for a taster.
Find out more about Dabbous 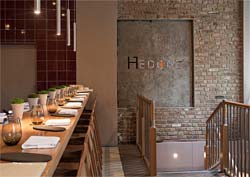 Who's the chef? Mikael Jonsson
Where is it? 301-303 Chiswick High Road, London W4 4HH
Why it's rated: Mikael Jonsson was a food blogger before he did what many have dreamed of and opened what he hoped would be his ideal restaurant in Chiswick. Using freshly sourced ingredients to create an ever-changing menu, Hedone has become a hardcore foodie's fave, although it somewhat divided the critics.
Find out more about Hedone 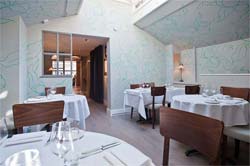 Who's the chef? Joe Mercer Nairne
Where is it? 438 King’s Road, London SW10 0LJ
Why it's rated: This Chelsea neighbourhood spot inspired hard-to-please blogger Chris Pople to praise its "food and service of purest gold." Giles Coren agreed, returning a week after his first visit, this time with his wife: "It is the highest accolade I can give a place, to say I liked it so much I wanted to share it with her."
Find out more about Medlar 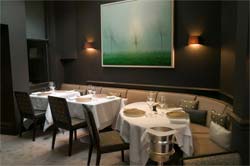 Who's the chef? Tim Allen
Where is it? 1a Launceston Place, London W8 5RL
Why it's rated: Less than a year after losing its chef of four years Tristan Welch and getting in Tim Allen from the two Michelin-starred Whately Place, Launceston Place has its first star, so Allen must be doing something right. No key critic has been since he took over, so expect some new reviews over the coming months.
Find out more about Launceston Place 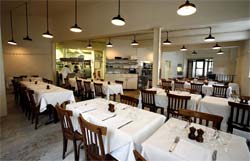 Who's the chef? Tom Harris
Where is it? 1 Leicester St, London WC2H 7BL
Why it's rated: The third restaurant by Fergus Henderson and Trevor Gulliver and their first foray into the hotel world, St John Soho divided critics when it opened; some loved the stark menus, but others were taken aback by the prices. The utiliatarian dining room is decidedly un-Michelin, so it's good to see it recognised by the guide. Head Chef Tom arrived here via Nobu and St John Bread and Wine.
Find out more St John Chinatown 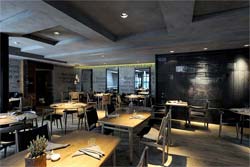 Who's the chef? Tom Aikens
Where is it? 43 Elystan Street, Chelsea SW3 3NT
Why it's rated: Tom Aikens lost his Michelin star when his restaurant closed for what turned out to be almost six months for a refurbishment. He reopened with an entirely new look. Clearly it's a change that met with favour by the inspectors who have promptly given the star back. Some critics remained unconvinced by the makeover, although they raved about the cooking.
Find out more about Tom Aikens 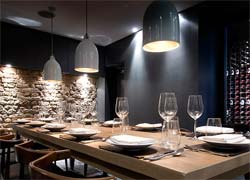 Who's the chef? Karam Sethi
Where is it? 15 -17 Blandford Street, Marylebone Village, London, W1U 3DG
Why it's rated: Chef Karam, who trained at Bukhara in Delhi, took over the kitchen at Trishna just over a year ago, which is when we tried it out, and has carved out a reputation for innovation as well as championing great wine with his food. "The best coastal food in the world!" is Karam's take on what they serve up.
Find out more about Trishna

Michelin's Bib Gourmand awards go to restaurants 'offering good food at moderate prices'. In London 'moderate' translates to three course for £28 or less - so that's a pretty good deal for great food.  This is also where Michelin gets the chance to reward more restaurants that aren't in the starched white tablecloth brigade. This year thenew Bibs go to the following London spots: