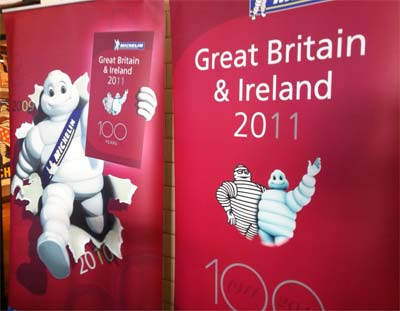 Update - 2012 awards have been announced.  Read about London's Michelin starred restaurants for 2012.

In an age where food bloggers and restaurant critics vie to be the first to review and rate London's restaurants, it may seem bizarrely anachronistic to place so much focus on the opinion of a hundred-year-old Paris-based restaurant guide which few of us actually read, let alone possess a copy of. But Michelin remains the gold standard for Britai's chefs, who - despite what many of them say in public - often really, really care how their restaurants fare in the annual star allocation.

'Any chef who has two stars and says ‘Fuck it, I’m happy with my two stars’ is a liar,' Hisbiscus chef Claude Bosi told Hot Dinners. 'Chefs have got massive egos, you know.'

So what do this year's Michelin star allocations tell us? Well for one thing, all the speculation in the world on Twitter and in print doesn't mean a restaurant is going to get a star (or a second or third). So it's another barren year for Francesco Mazzei at L'Anima and Tristan Welch at Launceston Place. Similarly, Marcus Wareing, Bosi and Michel Roux Jnr are all still waiting for that magical call which means they've risen from two to three stars - putting them in that elite club of just 90 restaurants in the world.

One of the biggest surprises was surely Pierre Koffmann not getting a star for his restaurant at The Berkeley. But then Koffmann himself told Hot Dinners that 'We're not looking for Michelin stars at all,' when we spoke to him back in November. While this year's quirky winner is probably Richmond's Petersham Nurseries Cafe which is about as far removed from the starched tablecloth image of Michelin as it's possible to be.

All in all, a relatively tame year for Michelin - with most of its effort concentrated on promoting their Bib Gourmands - good food for under £28 for three courses - which was awarded to eleven London establishments, including Hot Dinners' favourites Polpo and Trullo. We'll never get a table there now...

Helene Darroze at the Connaught

Who's the chef? Helene Darroze
Why it's rated: It may not be the most talked-about restaurant in town, but Hélène Darroze (the inspiration for Colette in Pixar's Ratatouille) has been quietly building a reputation for herself since opening at the Connaught Hotel in 2008. A quick look at her page on Hot Dinners show she's divided the critics, but Metro's Marina O'Loughlin is a fan, saying of her cooking: 'Flavours throughout are gutsy and vivid.'
Find out more about Helene Darroze at the Connaught

Who's the chef? Jeff Galvin
Why it's rated? Everyone hailed the opening of Galvin La Chapelle as one of the most beautiful dining rooms in London - but they're no slouch in the kitchens either as Head Chef Jeff Galvin has proved. As Marina O'Loughlin put it in the Metro, 'the whole thing is as smooth and seamless as a pair of posh control pants.'
Find out more about Galvin La Chapelle

Who's the chef? Alexis Gauthier
Why it's rated: He made a name (and won a star) for himself at Rousillon in Pimlico and last year Gauthier decided to go it alone, opening his restaurant in Soho. From the word go, it was clear he was aiming for the stars. Bloomberg's Richard Vines said; "Each dish is beautifully composed, the elements as polite and harmonious as a string quartet or a performance by Justin Bieber. The word exquisite comes to mind."
Find out more about Gauthier Soho

Who's the chef? Mark Kempson
Why it's rated? A joint operation between The Square's Philip Howard and local bistro genius Rebecca Mascarenhas, Kitchen W8 quickly won a loyal Kensington following and managed to please the picky Times critic AA Gill who said it was 'informal enough to attract midweek diners, and sophisticated enough to impress the in-laws.'
Find out more about Kitchen W8

Who's the chef? Skye Gyngell
Why it's rated? Chef Skye Gyngell came to Petersham from the rarified world of Conde Nast - where she was Food Editor at Vogue - but her spot on the riverside at Richmond couldn't be further from that world. This 'elegant greenhouse' puts fantastic dishes on the rickety tables time after time and while it might be a bugger to get to, the considered view is that it's worth it.
Find out more about Petersham Nurseries Cafe

Who's the chef? Sean Burbidge
Why it's rated: Gordon Ramsay last year lost a star at Claridges, but he's come bouncing back with a first star for newly-opened Petrus. There's been reams written about the split between Ramsay and the first Head Chef at Petrus Marcus Wareing, but what counts in the end is the food and clearly Michelin thought Sean Burbidge, who's worked for Ramsay at Hospital Road and at Ramsay's Versailles restaurant has done enough to warrant his star.
Find out more about Petrus

Who's the chef? William Drabble
Why it's rated: Michelin starred Chef William Drabble joined St James’s in September 2009 after spending a decade at Aubergine. An early fan was Times critic Giles Coren who said Seven Park Place was 'a grown-up, serious restaurant for people who eat out a lot and want a treat, who can afford it, and won’t be intimidated by its elegance.'
Find out more about Seven Park Place

Who's the chef? Nuno Mendes
Why it's rated: We called it a Marmite establishment and it certainly divided the critics, but no-one could deny that Nuno Mendes has the kind of original vision that Michelin says it's looking to reward. 'I'd like to create a world-leading restaurant,' Mendes told us. With this award he's certainly on his way.
Find out more about Viajante

Michelin's Bib Gourmand awards go to restaurants 'offering good food at moderate prices'. In London 'moderate' translates to three course for £28 or less - so that's a pretty good deal for great food. This year the Bibs go to the following restaurants: