We check out Taste of London

Here at Hot Dinners we've been reading a lot about the restaurant festival Taste of London - both good and bad. Bizarrely for a festival aimed at foodies, it does seem to get people riled up, with most of the complaints focused on issues of queueing, crowds and value for money.

Clearly we had to have an informed opinion on the matter, so thanks to the good people of Galbani cheese, we secured a press pass and headed down to Regent's Park this Friday afternoon to see what this great festival of food had to offer.

Our first impressions were pretty good - a lot of key restaurants and chefs had chosen to take part and it certainly helped that the sun was shining.This was our kind of festival, swapping earsplitting music for the gentle sound of corks popping and veggie burgers for some of the best restaurant dishes in London, and by virtue of that, the world.

But how exactly does a restaurant festival work, you might wonder. Well we thought the best things Taste had going for it (with the exception of the free food and drink - more of which, later) is in giving punters the chance to graze their way around the top London restaurants without having to brave the bookings system or fork out hundreds only to discover too late that they don't actually like anglo-italian fusion cuisine. The festival operates its own money system - crowns - with each crown worth 50p. All the food on offer at the restaurant stalls, and much of the exhibitor stalls is charged for in crowns only. So, for example, a portion of Salt Yard's courgette flowers stuffed with goats cheese and drizzled with honey would cost you 10 crowns or £5.

Some dishes were clearly better value than others. One of our favourites - the crab toast from Fino - was a massive portion for just 8 crowns. But the Potted devilled brown shrimp and crab in a shell on pebbles from Launceston Place for the same amount, was seriously mingy. Happily Launceston Place won back brownie points later on with the best dessert we tried - rhubarb and custard ice-cream crumble served in a cornet with crushed rhubarb and custard boiled sweets crammed into the base of the cornet.

Over the two sessions we attended, we noticed that the evening sessions were much busier (not that surprising) and that certain restaurant stalls were much more popular than others. When the hungry hordes were first let in, a notably large number went straight for the Joel Rubochon stand. Other particularly popular stands included Croque Gascon and Theo Randall. 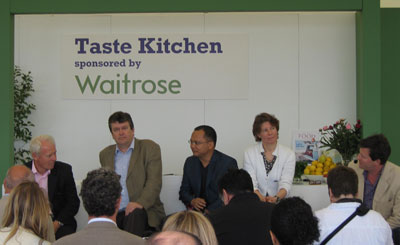 In addition to the restaurant stalls, there are a series of theatres offering chef demonstrations, food tasting and general foodie talks. We spotted Waitrose Fool Illustrated editor William Sitwell interviewing, among others, Alan Yau and Sally Clarke, popped into the Wine Theatre for a wine and cheese paired tasting with Galbani cheese. Best of all, we just happened to be passing by one of the stands when they began a Portugese wine and Italian food tasting. The 30 month old Parmesan with ice-cold Port was simply fantastic.

Other standout taste moments for us included the Pigs cheeks at the Waitrose stand, the wine choice at Catchpole and Frogitt and the aforementioned ice-cream cones.

While you do have to spend money here on trying the restaurant menus, it's also suprisingly easy to spend a lot of time eating and drinking for free it you keep an eye out for opportunities. We managed the following in our five-hour stint, and we could have tried harder; parmesan, Port, parma ham, sausages and mash, smoked salmon on soda bread, whiskey, vodka, salmon tarts, beef and ale pies, Pomegranate wine (a real Marmite moment!) and macaroons.

So while this is a far from cheap day out - it does offer a really good opportunity to see at a glance what London restaurants have to offer. Go, expecting to spend at least £20 a head over and above your ticket and you'll be able to find out which restaurants are worth your custom in future as well as brushing shoulders with some of the best chefs we have.

All in all - we recommend it and will be going again next year, so see you there.