For a world-class city, London is remarkably short of high-rise restaurants with a view. Sure, we have a few notable exceptions - Rhodes 24 overlooks the city from the 24th floor of the NatWest tower, Galvin Windows enjoys a pretty impressive view over Buckingham Palace Gardens from its position on the 28th floor of the Park Lane Hilton and Paramount on the 32nd floor has just opened to the public at Centrepoint. But we’re definitely short of the nosebleed views that foodies in Tokyo and New York take for granted.

Happily, a quick shifty at the planners’ roster for the next year or so, reveals a veritable forest of skyscrapers taking form – many of which are including restaurants and bars at the heart (or, should we say, height) of their development. Here are the ones we think you should know about. 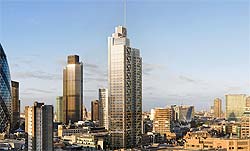 What to expect: According to a press release for the Tower, ‘The Restaurant & Sky Bar together with external terraces will be situated on floors 38 – 40. They will sit 175m above Bishopsgate and boast unparallel views across the City and beyond.’ It’ll be open to tower tenants and the public and will have its own street access. 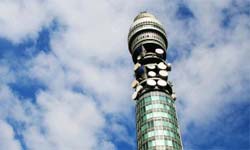 What to expect: This iconic restaurant was the talk of the town when Billy Butlin opened it in 1966, revolving every 22 minutes so while you might be looking out across Regent’s Park for your prawn cocktail, you could be facing the Thames for your Black Forest gateau. It closed in 1980 over safety concerns over public access to the tower . News that the restaurant would be reopening was met with delight with anyone who’d be taken there for dinner by their parents (and had the certificate to prove it!).

No chef has been appointed yet, but Gary Rhodes told Hot Dinners he’d love to be involved. 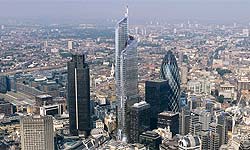 The Pinnacle Tower – the highest restaurant in Europe!
Opening: 2011
Where: Bishopsgate, London

What to expect: Of all the tower restaurants currently being constructed in London, the Pinnacle already has the glitziest owners. Jeremy Corbin  and Chris King of the Wolseley (and formerly behind The Ivy, Le Caprice etc) have taken a lease for a massive 13,00 square feet restaurant and cocktail bar on levels 58-63 of this new city tower. A spokesperson for the development said of Corbin and King’s involvement: ‘We look forward to them creating what will be one of the best restaurants in Europe as part of a truly iconic addition to the London skyline.’ 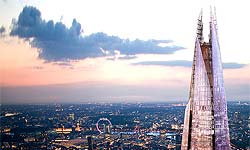 What to expect: This 306m tower will be the tallest in Europe when it’s completed. Happily Londoners will be able to enjoy the views from most of it without living or working there as the Shangri-La hotel group has taken up the lease for floors 34-52 which will include restaurant space. The development has also set aside floors 31-33 for restaurants. 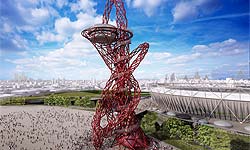 Restaurant at The Orbit Tower
Opening: Summer 2012
Where: Stratford, Essex

What to expect: The £19.1m Anish Kapoor Orbit tower at 115 metres high will tower over the Olympic Stadium in East London. And while, not many details are available about it, except for sketches of what it will look like when finished, there are plans to feature a restaurant alongside the viewing platform for visitors. The tower, which is 22m taller than the Statue of Liberty, will have the ‘most wonderful new vista over london’ said Kapoor.