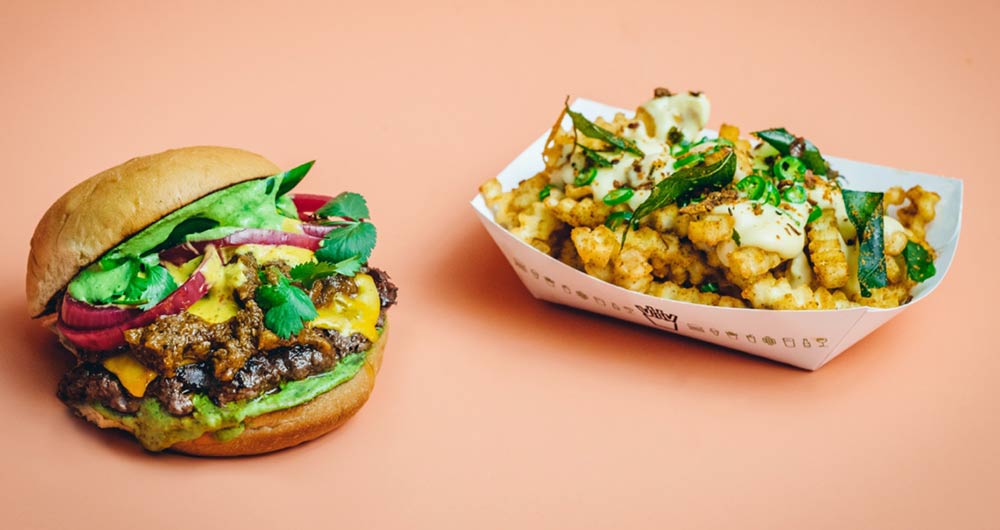 They already have truffle burgers as their Christmas special, but Shake Shack also have something else pretty special planned for December. Mark Rosati of Shake Shack and Karan Gokani of Hoppers are teaming up for a special Hoppers/Shake Shack burger - but it'll only be available for two days.

The burger is the Lankan Shack. As Karan explains: "We’ve tried to take the elements of a traditional burger and add a unique Hoppers spin to them – think bright red onions pickled in spiced coconut vinegar; coriander and green chilli mayo to replace a burger sauce; a Sri Lankan mustard cream sauce instead of mustard, and a rich braised short rib curry to complement the flavours and texture of the Shack cheeseburger.”

On top of that, there are also Chilli Cheese Fries, which he says "were inspired by one of my favourite dishes at Hoppers, the chilli cheese dosa, a crisp rice and lentil crepe topped with cheese and green chillies. I’ve eaten my bodyweight in these while testing and shooting the recipe and have no doubt they are the best fries I have ever tasted!" Fighting talk indeed.

All proceeds from the burgers and fries will be donated to The Felix Project, a charity fighting food waste and hunger.

If you're a fan of Hoppers and Shake Shack, you won't want to miss this.

Where is it? Covent Garden - 24 Market Building, The Piazza, London WC2E 8RD