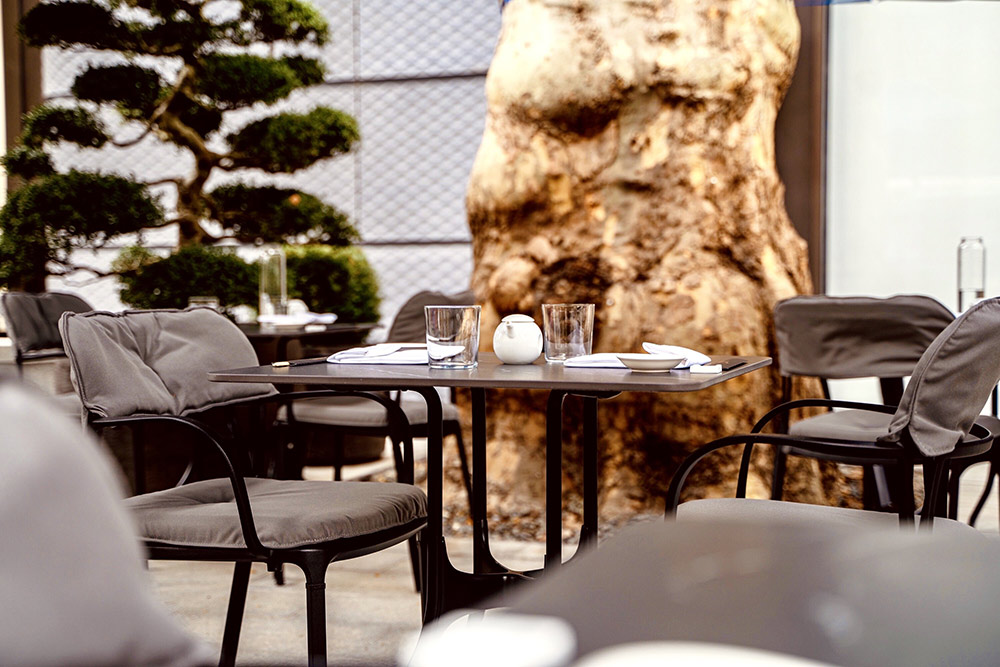 The new terrace at Nobu Hotel Portman Square in Marylebone

Alfresco dining is once again going to be a very big thing in London - particularly as it's the only option until 17 May Here, we're keeping track of the new alfresco dining and drinking options popping up across the capital.

Big Jo (Holloway) - their pre-lockdown time didn't give them a chance to open up their terrace, but it's open now and looking lovely.

The Savoy (Strand, from 21 April) - the hotel's launching Solas, a pop-up in their famous forecourt with oyster and whisky luges.

Nobu Hotel Portman Square (Marylebone) - the newest Nobu in the group has taken everything outside the front of the hotel.

Cafe Royal (Soho) - the luxury hotel has a large new Green Bar terrace on pedestrianised Glasshouse Street in association with Cloudy Bay, plus there's a Cake & Bubbles terrace too.

Treehouse London (Marylebone) - the newest alfresco space at this hotel (which also boasts The Nest rooftop bar) is the Courtyard - an outdoor dining popup.

The Standard Rooftop (King's Cross, 1 May) - the latest bar to open at this KX hotel is up on the rooftop, where they'll be serving hot dogs and cocktails with a view.

Como Garden - (Kensington) this new High Street Kensington restaurant barely managed a few days opening in December. Now it's back and there's a lovely terrace to enjoy arancini and pasta on.

14 Hills (City) the popular City spot is heading one floor up, opening a rooftop terrace on the 15th floor.

Gordon Ramsay's Street Pizza (Battersea) - the latest branch of Ramsay's pizza empire has a large outside terrace just off the river.

St Felix Place (Borough, 14 April) - from the team behind nearby Flatiron Square, this new space has loads of alfresco dining along with a new brewery and taproom.

The Berkeley (Knightbridge) - the existing garden restaurant has added some new beach huts to the space which are bookable for groups of up to six.

The Dorchester (Mayfair) - There are several new alfresco spots at the hotel, including a walk-ins only space for drinks at the entrance. But the real draw will be the new rooftop restaurant.

Kerridge's Garden Grill (Whitehall) - Tom Kerridge's restaurant at the Corinthia London finds some outside space for a month long pop-up.

The Terrace by Megan's (Clapham) - The latest dog-friendly Megans is an entirely alfresco restaurant on Clapham Common.

The Tramshed Project (Shoreditch, 15 April) - the shed goes outside with a 50-seater terrace with a new Spring menu from Andrew Clarke (including Butternut Schnitzel served with Pumpkin Miso Pickled Blueberries) and tropical slushy cocktails too.

The Cheese Truck (Paddington, 14 April) - while we wait for The Cheese Barge, they're bringing the Cheese Truck to Paddington Central, serving their grilled cheese sandwiches with a pop-up terrace beside the canal.

The Palomar (Soho, 14 April) and The Barbary (Covent Garden, 16 April) are boh adding terraces outside for the first time.

Quality Chop House (Clerkenwell) is launching an outside terrace for the first time while sister restaurant Clipstone (Fitzrovia, 12 April) is also launching its terrace with a special menu

The Wigmore (Marylebone) is launching a summer terrace and garden with a new menu by Michel Roux Jr.

Coya (City) - They're joining up with Veuve Cliquot for a "Peruvian oasis in the city" hidden in a courtyard.

Joy at Portobello (Kensal Rise) - it may well be the last month for Stevie Parle's hit alfresco restaurant, so they're launching a new seafood terrace.

The Red Duck (Balham, 15 April) - the well-reviewed Chinese restaurant has only opened for delivery so far and it's new terrace sees it opening to diners for the first time.

Campfire (King's Cross, from 14 April) - Two Tribes are teaming up with new BBQ kings From The Ashes BBQ for their new terrace in King's Cross, and they'll be bringing along their pork-filled doughnuts. They'll be the first residency in what's planned to be a series of residencies from UK and international chefs.

London Shell Co (Paddington, from 14 April) - while you can't actually board The Grand Duchess moored barge, they've instead set up a terrace just outside the boat. There will be a new menu too, including fish rolls and a decidedly tempting Confit Tuna & Ogleshield Melt.

Novikov (Mayfair) - The Asian/Italian restaurant is launching Novikov Outside, a new terrace seating around 50 with a menu that features some of the classics from the restaurant.

The Farrier (Camden, from 15 April) - this new Camden pub and restaurant will have a hidden courtyard with a firepit and outdoor covered terrace. It'll be a super spot for an alfresco Sunday lunch.

Bermondsey Larder (from 14 April) - The restaurant formerly known as The Dairy launches its new partially covered terrace. There will be a special terrace menu with new creations including Farmer Tom’s welsh lamb, merguez, fennel and potato pie and Applewood-smoked eel with broad beans, Amalfi lemon and mint.

Smoking Goat (Shoreditch) - the big covered (and heated) terrace outside Smoking Goat will be back in action. Expected on the menu are a spicy and garlicky Dorset clam som tum and a new laab section, including a Northern Thai prik laab of chicken and offal and a raw laab of ‘cull yaw’, aged mutton.

Mariage Freres (Covent Garden) are opening up their tea terrace, with a specific focus on iced tea, with 20 teas specifically blended to be chilled. They'll also have an iced-tea cocktail menu, including drinks like the Opéra Sunrise, a tequila/green tea cocktail flavoured with red fruits and blueberries, basil, ginger.

Oklava (Shoreditch, from 14 April) - Oklava goes outside for five weeks, with dishes including a Kumru sandwich with sujuk and grilled cheese as well as whipped feta crostini with candied pumpkin.

Outside @ Trinity (Clapham from 19 April) - Adam Byatt's restaurant is launching a new outdoor space next to the restaurant which will have a focus on small plates along with fish and meat on the BBQ.

Allegra (Stratford) - The terrace at Patrick Powell's restaurant is getting a complete overhaul with the launch of Happy Burger popup and guest chef residencies.

Arros QD (Fitzrovia) - the Quique Dacosta restaurant is launching a new terrace where they'll be serving their signature sharing paellas.

Right now, alfresco is definitely where it's at. Here's our guide to London's loveliest spots to eat outdoors, rain or shine. ...
Read more

London's rooftop spaces are open for an alfresco season like no other. Here's where you can dine outside and get a great view at the...
Read more