The Feelgood Food Feed - cheery news during the coronovirus crisis

They may have closed their Tottenham restaurant, but Chuku's are really missing their community - so they've found a way to re-connect online. They're going to be hosting virtual supperclubs, where 20 people (both in the UK and worldwide) will sit down for dinner together. They'll provide a playlist, you'll be asked to dress for an evening out and will prepare your dinner and drinks before sitting down at the virtual table. Things will kick off with a toast and every guest will be "asked to share something that means something to them."

The first one kicks off this Thursday (9 April) with more to follow. Sign up to their newsletter to keep up to date on when tickets are released.

Helping out frontline workers, Gail's bakery has partnered up with The Conduit and Ralph Lauren and are giving end-of-day meals for workers who have worked long shifts. So far, they've supplied 2,000 meals and over 2,000 loaves of bread - and are aiming to delivery 2400 meals a week. You can donate to this campaign here. 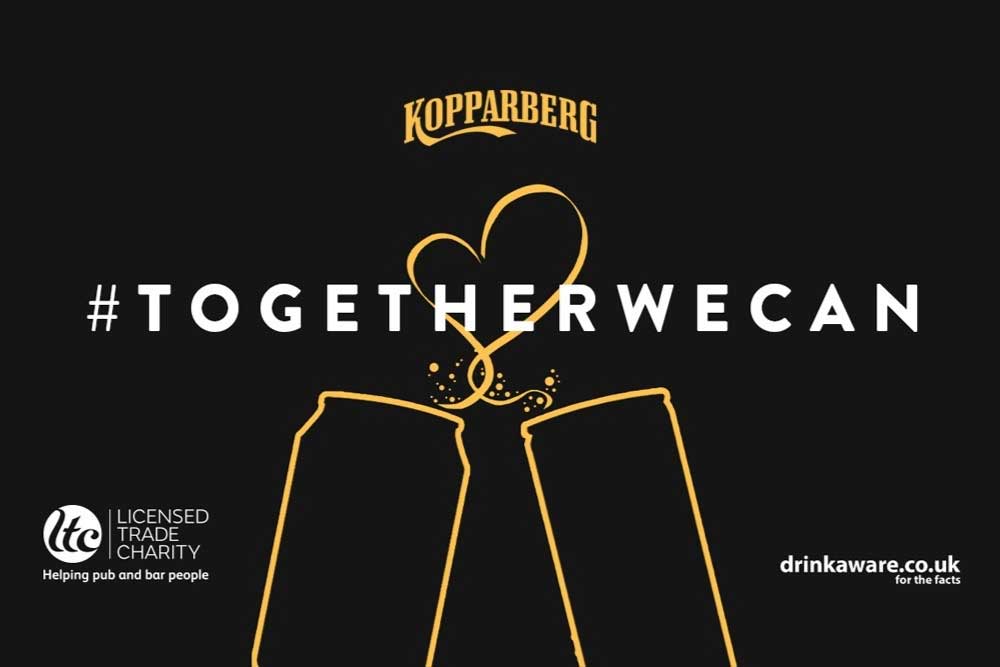 Donate - and get free beer or gin with Kopparberg

We write a lot about restaurant closures on Hot Dinners, but spare a thought for those who work in the pub and bar industry too. If you fancy helping them, there's a cracking deal on offer.

Kopparberg have teamed up with The Licensed Trade Charity and their COVID-19 appeal to help provide financial assistance and advice for those in the pub, bar and brewery industry during this difficult time, and along with Kopparberg, are fundraising to safeguard the future of the drinks industry in the UK.

Donate more than £20 and as a supporter (aged 18+) you'll receive a complimentary case of Kopparberg cider or gin to say thank you. Which we think is crazily generous.

Over in Bethnal Green, the Town Hall Hotel are joining forces with their long term charity partner Age UK and will be delivering baskets of eggs, milk, cookies and preserves to elderly locals in need. 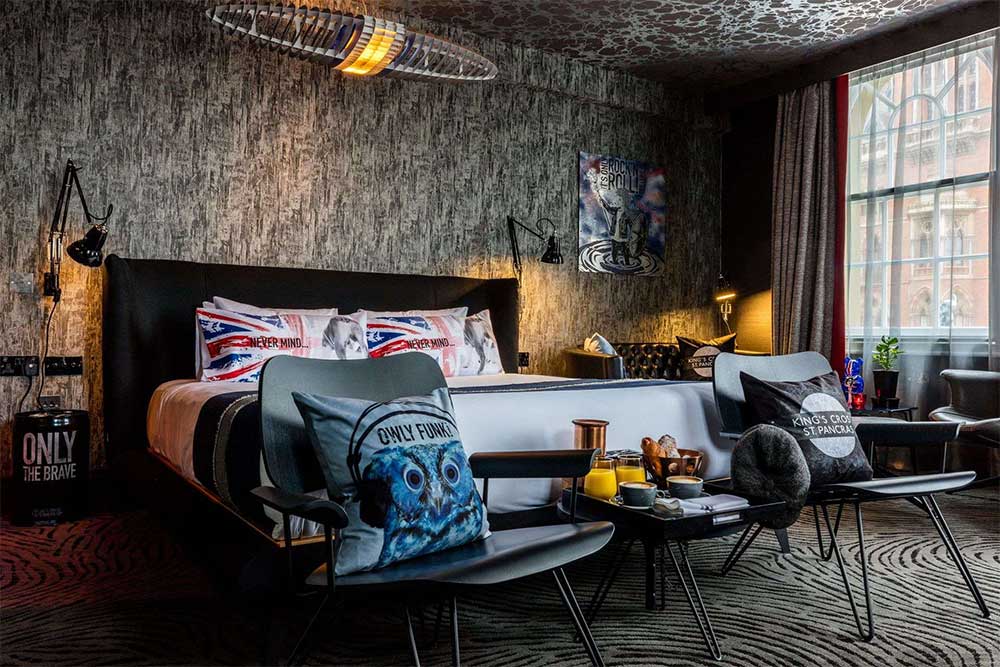 Three hotels in the King's Cross area are throwing open their doors to those working for the NHS. The St Pancras Hotel group - made of The Gyle, The California and The Megaro are offering their rooms as a self-service apartment to NHS staff. There's contactless check-in, stringent disinfection schedules and loads of sanitising stations throughout the hotels. The offer's available to anyone working for the NHS during the crisis - from doctors through to volunteers.

The Vintner are currently giving away ALL their profits

Wine delivery company The Vintner has pledged to give away 100% of its profits from wine orders, from 2 April until midnight on Easter Day to Hospitality Action. As far as they're concerned, the charity's supported them over their 9+ years in business and now it's time to give back. To help them, head to www.thevintner.com

Claridge's reopens for the NHS 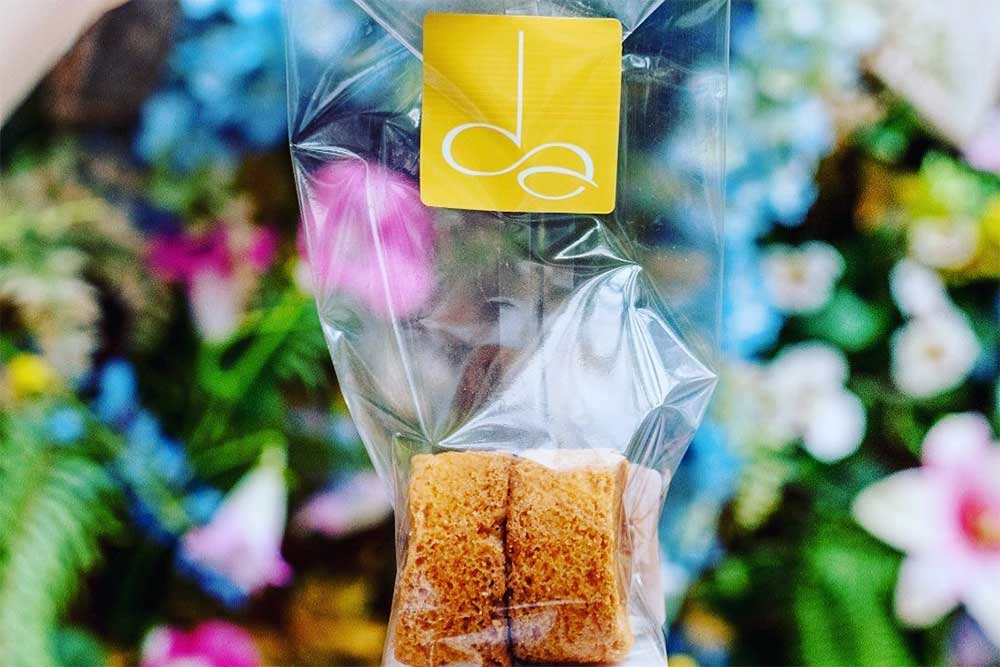 Making sure that families who live near the Pimlico Bakery don't lose out on their free school meals during the lockdown, Dominique Ansel is stepping up and providing meals to eligible families. All you have to do is pop down and show the right documentation. They're also giving free hot drinks to the NHS, police and Emergency Services along with a 50% discount on food at the bakery when they pop in on a break.

Yard Sale Pizza launched a new NHS fund on Friday to help raise funds to feed 5000 staff at their local hospitals – Homerton, Whipps Cross, and The Royal London Hospital. They've already raised £10k and you can help by donating on their website. 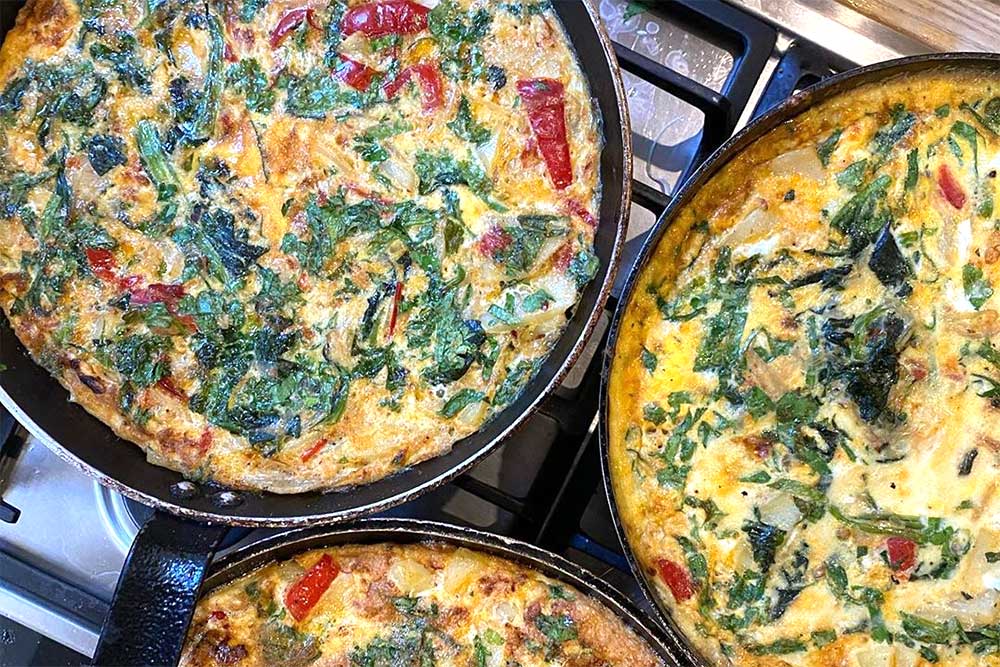 Proving that a problem shared is a problem halved, the wonderful volunteer team at Cook 19 are collecting donations, food, ingredients turning them into food hampers and restaurant-quality cooked meals for NHS key workers. The brainchild of Lulu Dillon, they also number Michelin-starred chef Hartnett on the team (she's making soups, frittatas and crumbles) particularly aimed at key workers in the NHS who are isolated or unable to cook for themselves or their families.

As reported by Sky News, food delivery service Deliveroo is aiming to give 500k meals to NHS trusts across the country. The venture is a combo of the company's own funds along with those of its customers. When you're online booking a delivery, you can opt to donate to buy meals for doctors, nurses or other vulnerable people. 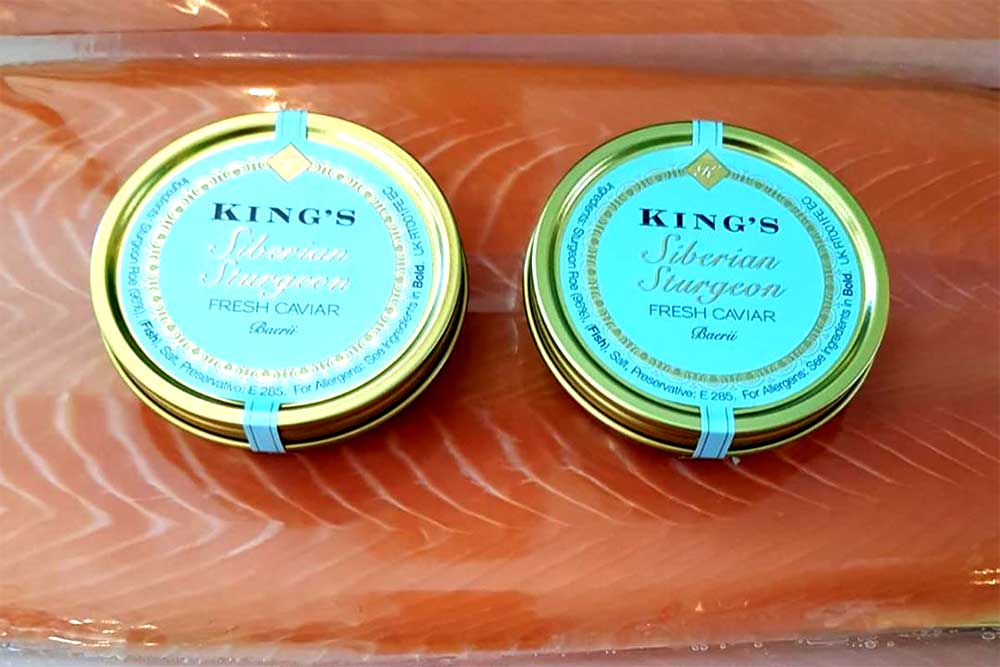 Otto's goes luxe for the NHS

Thanks to a donation from King's Fine Food, Otto's on Grays Inn Road has been able to feed local NHS workers with a five-star feast of smoked salmon and caviar sandwiches. Otto's on Instagram 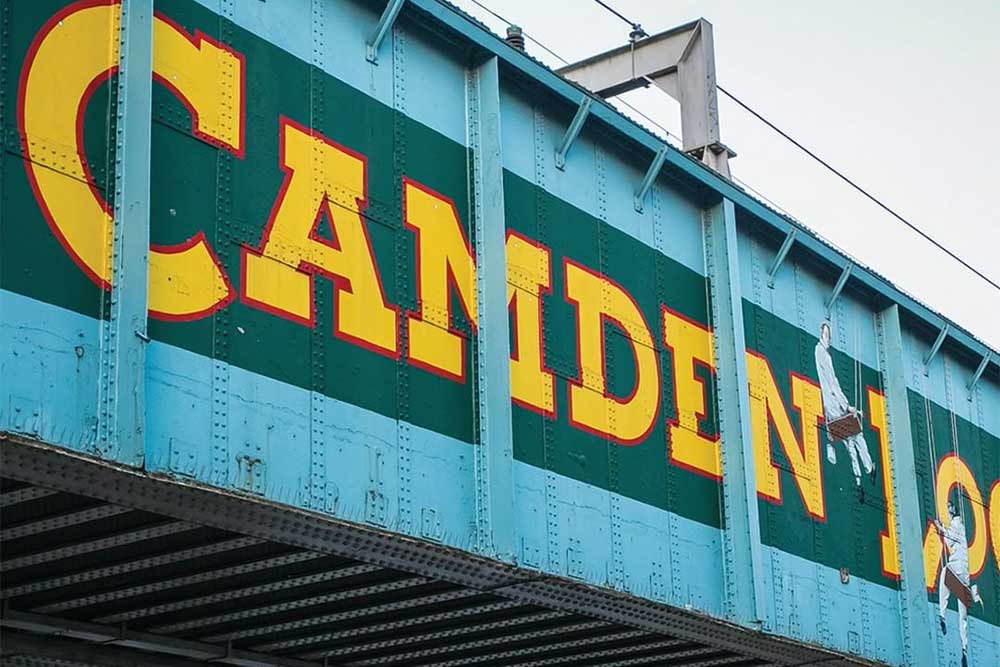 Not content with just doing one nice thing (like pausing rent until the market is back open) Camden Market have gone several steps further. They've switched their hospitality kitchen to a soup kitchen serving homeless people, the Camden Grocer are providing complimentary hampers to the NHS staff staying in their residential apartments. And the market's also offered 10 beds to start (with more to come) to our local NHS partners for free. 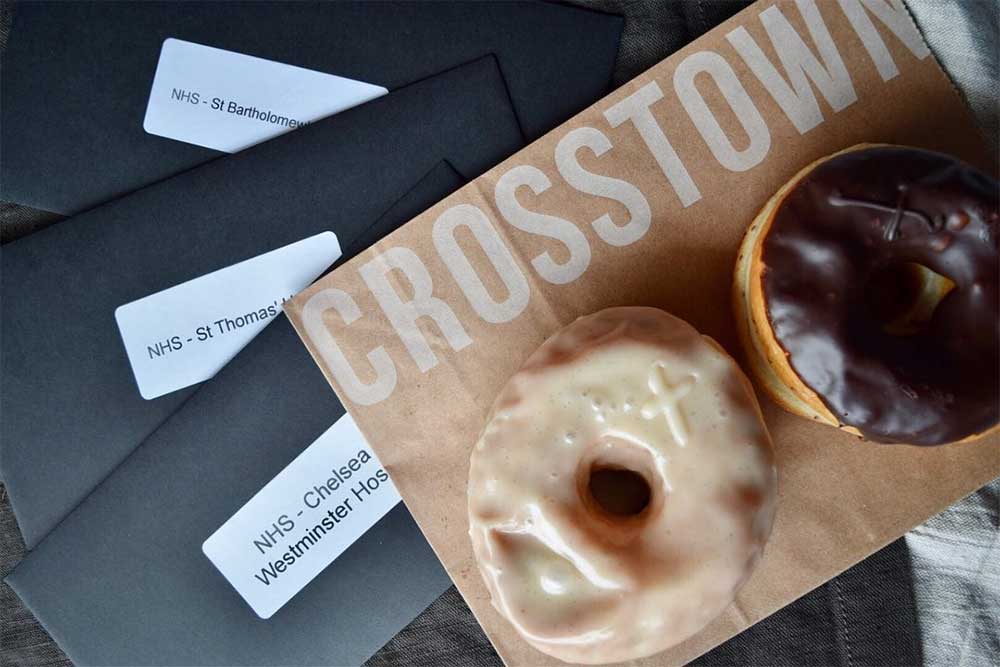 Fancy sending a sweet treat to frontline NHS workers in need of a sugar boost? Over at Crosstown Doughnuts, they've launched #operationdoughnation making it easy for us all to donate doughnuts to hospitals across the City.

are teaming up with London charity, City Harvest London, to deliver thousands of meals to vulnerable Londoners. They turned all of the leftover steak in their Sutton-based butchery into chopped steak lasagnes and cottage pies.

Just Eat is giving all NHS workers a 25% discount

So at least when they head home from their work, our wonderful NHS workers will not only be able to get a meal delivered to their door, but they'll save a bit of money too. More about the discount. 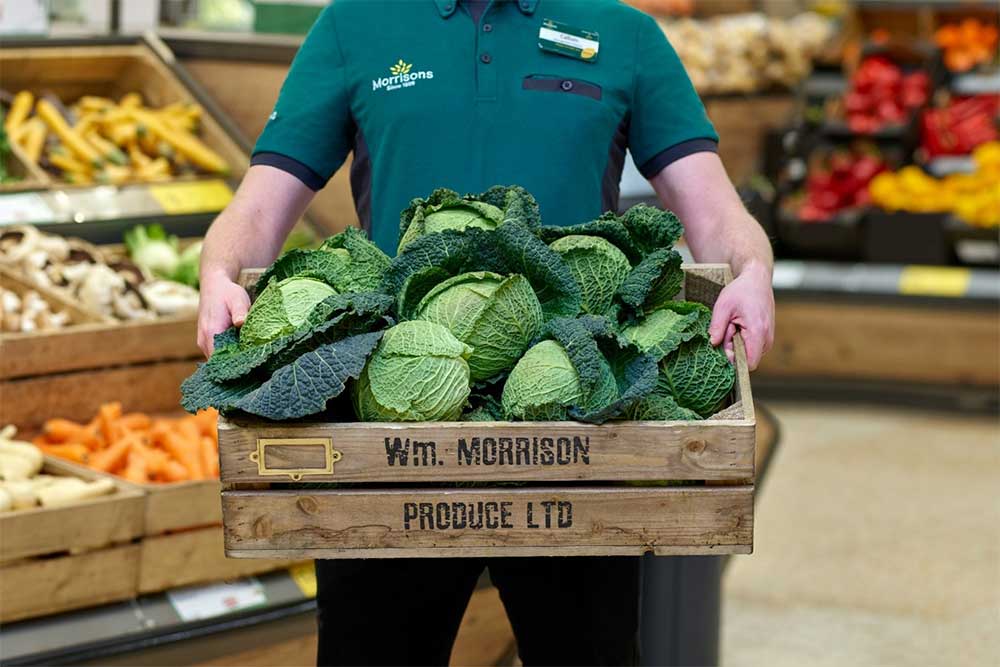 Kudos to Morrisons supermarkets who are doing their bit for Britain's foodbanks. They're spending an extra hour a day at their food packing site to help send £10m of essential items to the foodbanks. And they're repurposing their in-store cafes into customer donation hubs. Read on The Guardian.