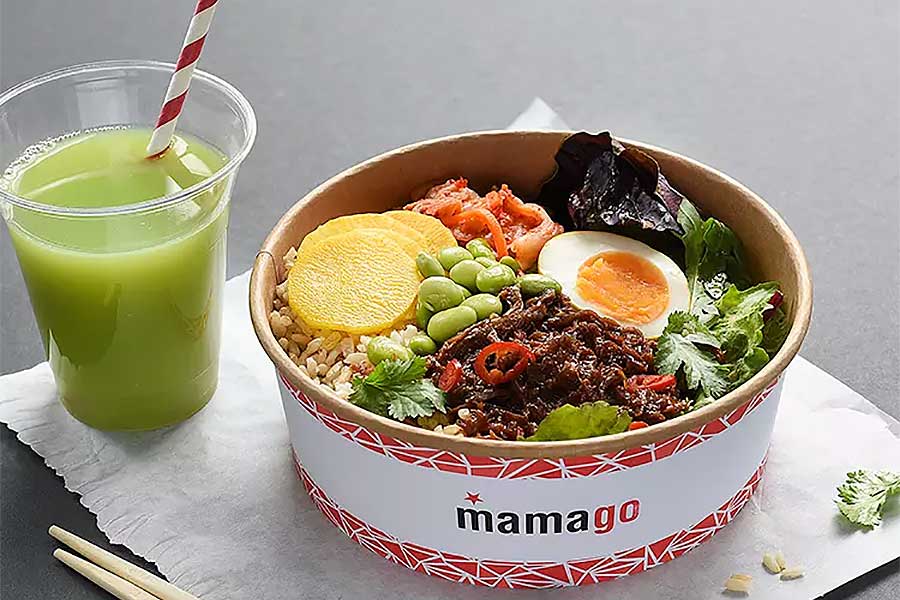 City folk in Fenchurch Street are the first to be able to try out Wagamama's new grab-and-go concept Mamago, which opened yesterday. Described as "Wagamama's little sister - more upstart, less sit-down" - the new space will be open from 7am through to 6pm

You can head in here early in the day for breakfast dishes like yuzu marmlade + mandarin coconut rice pot or a multi-grain coconut porridge with brown rice syrup along with okonomiyaki omelettes. And if you're after a bacon sarnie then here it comes as a bacon and egg in a pumpkin and turmeric wrap.

At lunch that menu extends into wraps, bowls, salads and more including:

And we applaud their packaging which is 95% card with a starch lining, which they say should be fully compostible at most offices.

Their executive chef Steven Mangleshot explains the concept a little more: “We have borrowed a few things from Wagamama including...katsu curry – so you’ll see some katsu dishes done in a Mamago way including a katsu chicken wrap, a vegan cauliflower katsu rice bowl, chicken katsu rice bowl and naked chicken katsu salad. All the dishes have been developed with health in mind."

It seems that they're going to be using Fenchurch Street as a bit of a test kitchen, working out what works and what doesn't and then when they're happy with the concept, rolling that out.

Where is it? 120 Fenchurch Street, London EC3M 5BA