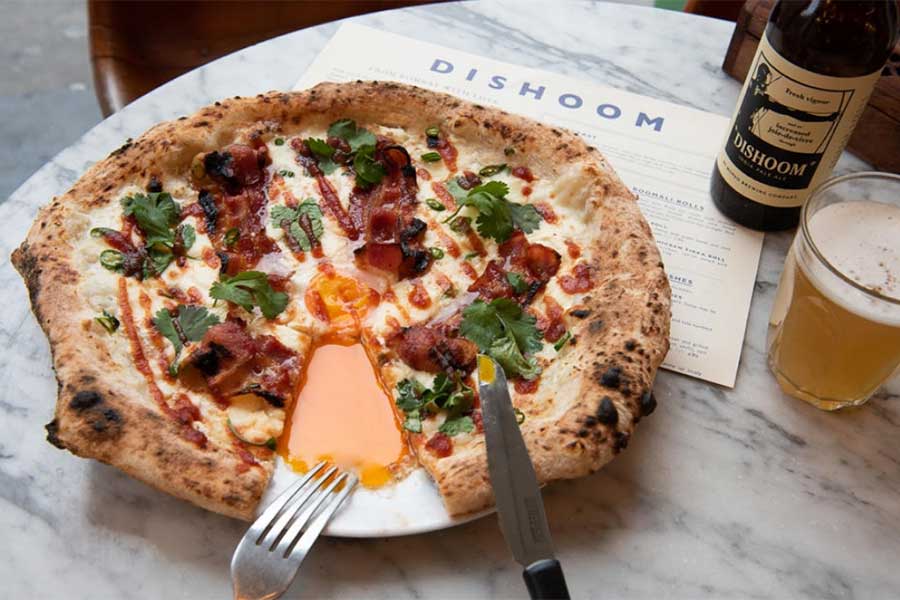 This year has been a big year for Dishoom's iconic bacon naan. First, they decided to supersize it, introducing the Bacon Double Naan in April. Now they've gone one further - teaming up with the chaps at Pizza PIlgrims for a special edition pizza - and it's all in aid of charity.

The Dishoom Bacon and Egg Naan Pizza sounds like a food collab made in heaven. Plus, every time you eat one Pizza Pilgrims and Dishoom will each donate a meal to Magic Breakfast, helping to support their aim of ensuring no child in the UK arrives at school too hungry to learn. Seriously? That's a win-win situation if ever we heard one.

The £12 pizza - which will be available at selected Pizza Pilgrim restaurants will use Clarence Court eggs and bacon from Ramsey of Carluke. The base of tomato sauce and cream cheese is topped with fior de latte mozzarella, some Dishoom chilli tomato jam and then fresh coriander and green chilli. And if you're ordering, why not go the whole hog and pair it with some Dishoom IPA which will be stocked at all Pizza Pilgrims locations throughout the collaboration.

As Thom and James from Pizza Pilgrims explained: “We have eaten more bacon naans than I can count over the years. We always joked about a recipe swap and then realised it might actually work - the naan and pizza base are distant cousins. As soon as we tried it, we knew we had hit on something brilliant.”

Kavi Thakrar, Dishoom’s Co-Founder said, “We couldn’t be prouder to be doing this in support of the incredible work Magic Breakfast do. Since partnering with Magic Breakfast and Akshaya Patra in 2015 we’ve donated over seven million meals to vulnerable children across the UK and India."

More about The Dishoom Bacon and Egg Naan Pizza