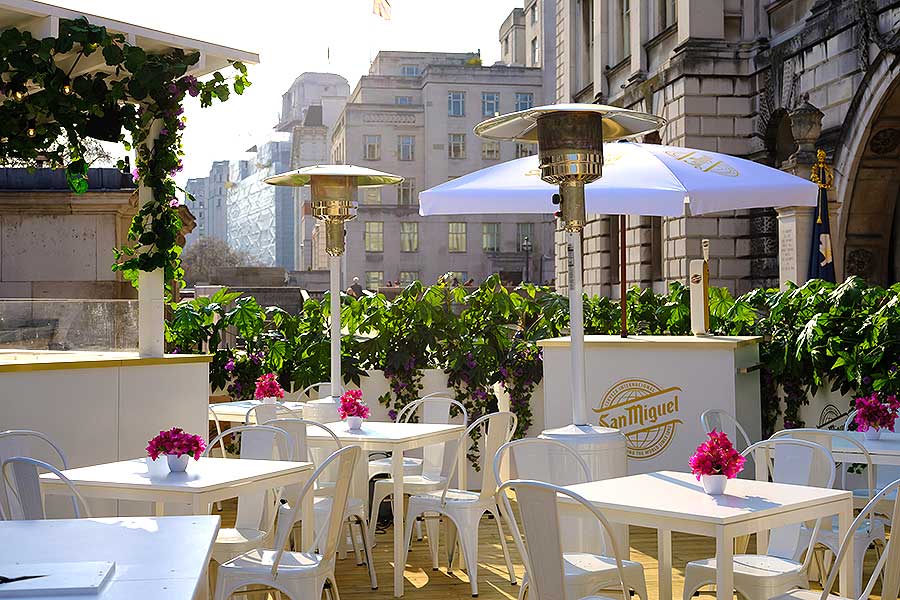 Stuck in London while everyone else is off on their hols? At least if you head to Somerset House over the coming months you can at least pretend you're in Spain.

They've just launched a terrace in partnership with San Miguel. Yes, you're looking over the Thames rather then the Med, but with a chilled beer in your hand and a range of Spanish snacks to choose from, things could be a whole lot worse.

Open daily from lunchtime the bar will serve up a range of San Miguel beers such as their San Miguel Especial, San Miguel Selecta and 0% ABV San Miguel 0,0 along with some exclusive beers including San Miguel London. There'll also be beer cocktails - we might have to head down to try the Piscolinho, a combo of Pisco, Cointreau, agave syrup, lime and San Miguel Especial.

On the food front there'll be Padrón peppers, Choricitos al vino, and Albondigas with romesco sauce, as well as stone baked flatbreads topped with Spanish ingredients such as Chorizo, manchego and rocket and Tetilla, Piquillo pepper and chilli and Spanish cheese and charcuterie sharing boards

More about the San Miguel Terrace at Somerset House

Where is it? Somerset House, The Strand, London WC2R 1LA