Studio Olafur Eliasson Kitchen comes to the Tate alongside his exhibition 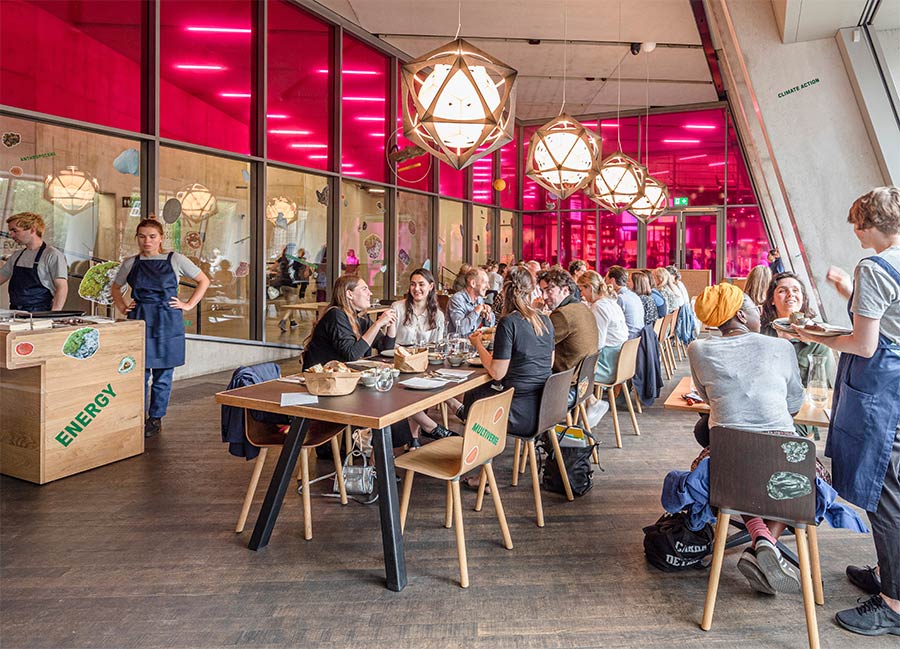 Starting in July, Tate Modern's latest exhibition is Olafur Eliasson: In real life - from the artist who brought us The Weather Project in the Tate's Turbine Hall (that was the one with the big sun suspended in the middle). But he's not just bringing over an exhibition, he's bringing a restaurant too.

In Berlin, he has Studio Olafur Eliasson Kitchen (aka SOE Kitchen). Set up in 2005, it "prepares organic, vegetarian meals that are shared by the full studio team four days a week, as well as visiting guests and collaborators." Marina O'Loughlin visited the original and was rather impressed:

The food at the Kitchen is vibrant, brimming with colourful freshness. It’s organic and vegetarian, frequently vegan, sourced mostly within a 10km radius of Berlin. Today’s menu offers cauldrons of earthy, fuchsia-coloured beet soup for us to ladle into bowls and top with a dollop of horseradish cream. Ricotta laced with mushrooms. The bread is glorious wholemeal sourdough, dense and chewy.

While the original is mainly a kitchen for the studio, it's popped up before, in Reykjavik in 2018, and now it's coming to the Tate's Terrace Bar.

We're told they'll be transforming the look of the bar, so you'll be surrounded by artworks and lamps designed by Eliasson and you'll eat family-style at tables similar to those at the studio - the idea is to get is as close to that experience as possible.

As for the food, there will be vegetarian dishes made from local, seasonal, mostly organic ingredients. Tate’s Head Chef Jon Atashroo has worked with the SOE Kitchen team, and they'll be cooking seasonal menus throughout the exhibition. Here's what's on the menu to start with.

Here's what the artist himself says:

The act of cooking, of welcoming people to the table, is a gesture of hospitality. The kitchen team and I are incredibly excited to be bringing the spirit of the SOE Kitchen to the Tate. It’s a privilege to be able to transform a space of the museum that is most often peripheral to the exhibition into a site for art.

Where is it? Tate Modern, Bankside, London SE1 9TG

Find out more: Read about the exhibition and SOE Kitchen on Instagram @soe_kitchen.