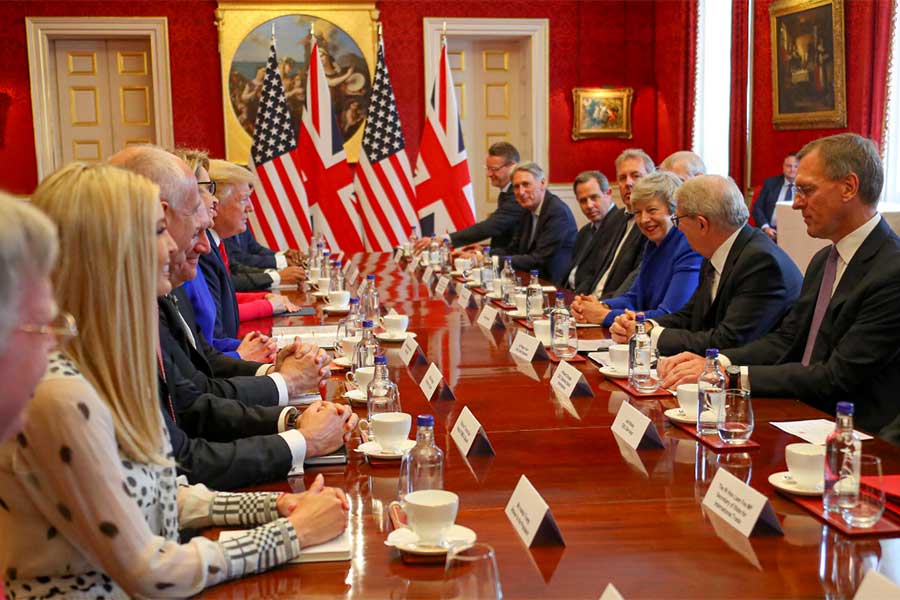 There's been quite a few column inches written on the fact that the Queen served up lamb - a meat Americans apparently rarely eat - to Donald Trump at the State banquet on Monday. Maybe that's why on the second day of the US President's visit to the UK, menus returned to the safe harbour of his favourite protein, beef.

It's no secret that the President likes his steak well done, so the catering teams responsible for his lunch at Downing Street and dinner at Clarence House will certainly have taken that into account.

At Downing Street, Trump and May enjoyed a working lunch cooked by our very own Jason Atherton. The chef served up a starter of Paignton Harbour crab, turnip and chilled crab bisque, followed by a main course of Lake District beef fillet with aubergine and roasted garlic.

Atherton told trade title The Caterer: “Theresa May’s office asked me if I would cook for President Trump, too. It’s rare that a boy from Skegness gets to cook for an American president and a British prime minister. They kindly donated a small amount to one of our chosen charities and it was a really special day.

“President Trump shook my hand and congratulated us on being the only UK-based restaurant group with a Michelin-starred restaurant in New York. It was a real privilege.”

Last night the American team hosted dinner at the American ambassador's residence in Regents Park where the menu was - more beef. This time dinner began with heritage tomatoes with fresh burrata, garden basil and Maldon Salt. That was followed by grilled fillet of beef with Pommes Anna, watercress puree, celeriac and chantenay carrots followed by summer berries with homemade vanilla ice-cream.

It was a menu that provoked amusement on social last night - for both its content AND the way it was designed.

If you think being a prince or president is pure glamour, feast your eyes on this staggeringly dreary menu served tonight by Trump at the US embassy for Prince Charles. Tomato salad; steak and chips; fruit salad and ice cream. Sponsored wine. Its where appetite goes to die. pic.twitter.com/Nr0B3JnLpP

NOBODY can read this menu. https://t.co/tHwqodyORX

And as President Trump heads over to Ireland today - he can expect more of the same. The Irish Independent reported that "Irish beef will feature prominently on the menus during his sojourn."