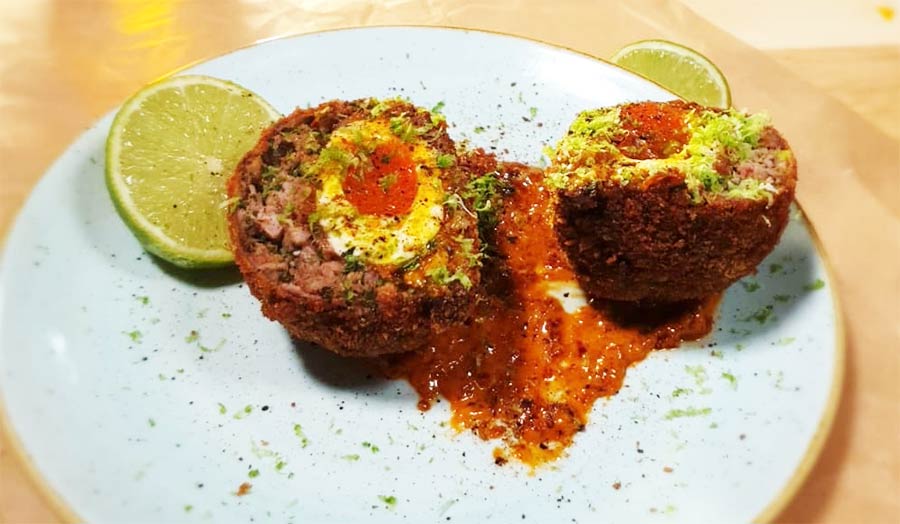 The winning scotch egg from Ali Borer of Smoking Goat

The annual Young's Scotch Egg Challenge is always one of the highlights of the London food calendar, and last night's do at the Canonbury Tavern in Islington was no exception. Hordes of fans of the humble pub snack thronged the pub hoping to try some of the 20 final entries.

Perhaps the hardest (but most envied) job of the night was down to the panel of judges. They were chaired by TV's Simon Rimmer and were Sunday Times food editor Lisa Markwell, editor of Restaurant Magazine Stefan Chomka, and beer expert and author Melissa Cole. Bob Granleese, food editor of The Guardian, took the role of adjudicator, while the event was compered, as it always has been, by the creative director of the World Restaurant Awards, Joe Warwick.

In the end though, winning eggs had to be chosen and this year they were as follows:

Most liked on social media - Calum Franklin from Holborn Dining Room - see below for why...

So this is our entry for tomorrow night's #ScotchEggChallenge It's a Mexican inspired egg with rare breed Berkshire pork, smoked ancho & chipotle chilli, cumin seed, pickled jalepeno, Mexican oregano, garlic and organic eggs from Kent. Finally it's been rolled in breadcrumbs and crushed tortilla chips before frying. After lots of testing I think we've finally got the heat level right. We are calling it El Jefe and it's proper fire 🔥#scotchegg