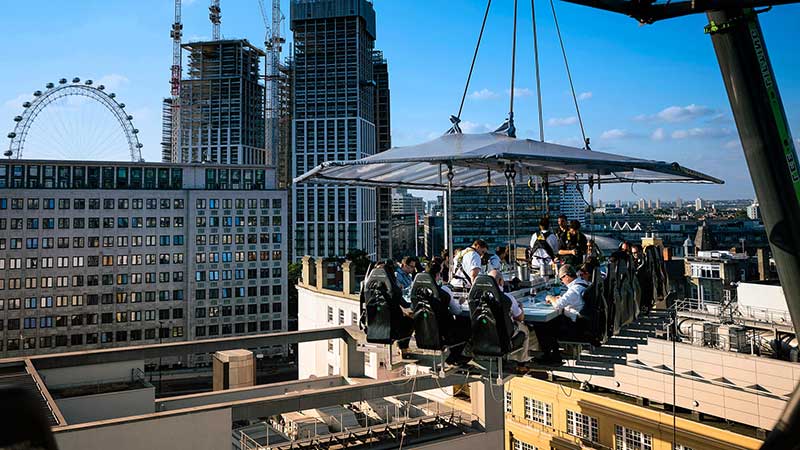 For the past few years, London In The Sky has been thrilling/terrifying diners by hosting a restaurant 100ft up in the air. And they're back for 2019 with a range of fun things planned, including letting it all hang out for charity.

Yes, that's right. If you've been thinking that the one thing you'd like more than dangling up in the sky for a great meal is dangling your bits out in the breeze whilst having a great meal, then this is 100% your thing.

From now until 3 April you can put your name into a draw to take part in the charity breakfast which will kick off the sky high restaurant's summer residency at The O2. The whole thing aims to raise money for CoppaFeel!, which works to raise awareness of breast cancer; and Movember, to raise awareness of and funding for all things related to the health issues faced by men. You raise the cost of the flight/dinner at £99 and are encouraged to drum up sponsorship too.

If all that sounds like too much naked ambition, they'll also be putting on regular meals between May and July. There'll be eight flights a day, including breakfast, lunch, prosecco and cake, cocktails and dinner.

The naked flight isn't the only special event though during the course of the residency. How about Bottomless Prosecco Brunch? Or High In The Sky – a CBD-themed flight?

More about London in the Sky

Where is it? Peninsula Square, East Greenwich, London SE10 0DX

When? 1st May and 15th July. Bottoms Up flight is on 30 April.Register online before 2nd April and the 44 attendees will be announced on the 5th April. There will be two tables of 22, one for CoppaFeel!, and one for Movember.