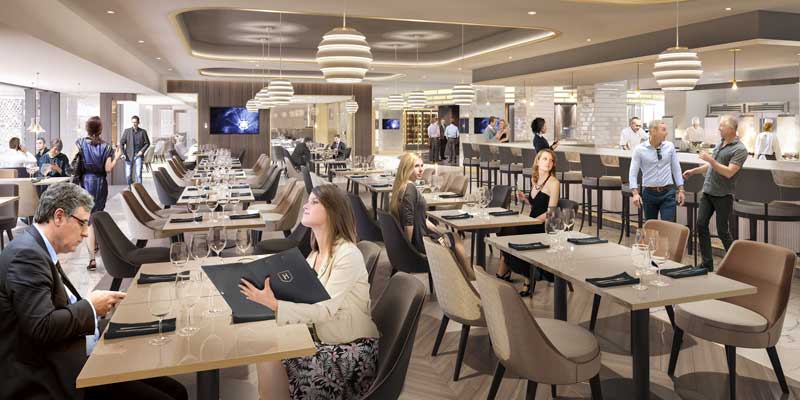 In a nutshell: Spurs new stadium is going big on restaurants

Summing it all up: A whole host of Michelin-star chefs have been signed up for the match day hospitality at Spurs' new Tottenham stadium with everything from fine dining to brasserie-style food promised for fans prepared to pay top whack.

Bryn Williams - Williams, chef Patron of Odettes in Primrose Hill is going to be responsible for the entire On Four menu. “It’s incredibly exciting to bring my signature dishes and Britain’s finest produce to the Club’s New Stadium. I’m looking forward to being part of something that takes the food offering at sports and entertainment facilities to another level.”

Dipna Anand - Anand owns the Southall restaurant Brilliant whose fans number Prince Charles apparently. "I’m looking forward to bringing the fantastic Indian dishes I grew up with to a new audience," she says. “At one match, guests On Four might be eating the finest European cuisine courtesy of the Roux family, Chris or Bryn, and the next they will sample my taste of Asia – there is a great variety on offer.”

Chris Galvin - As Chris told Spears magazine: "I’m mad about football and just by coincidence, I’m a lifelong ‘spurs’ supporter. My nan was born just down the road at Seven Sisters, so it’s a no brainer for me." He says dishes will be "be seasonally-driven and ingredients-led" and referred to what they offer at La Chapelle in Spitalfields as the closest comparision to style of food.

Roux Family - At 12 Tottenham Hotspur matches per season, the entire On Four menu will be designed and prepared by the Roux family and their team of expert chefs, with either Albert, Michel Jr or Emily personally overseeing the service delivery and engaging with guests.

The On Four section also features The H Club, an exclusive Members’ Club featuring a Chef’s Table and Player’s Table where you can dine with Club legends. And if you happen to have a favourite wine, cognac or other liquor, they can be stored on site for you in a glass-fronted, temperature-controlled display Vault.

But that's not all, because at seven games each season the Club will offer emerging ‘Hero Chefs’ the opportunity to take over the menu and host service On Four. They'll be plucking chefs from the surrounding area as well as those who win industry competitions like the Craft Guild of Chefs ‘National Chef of Year'.

More about the new Tottenham stadium

Where is it? White Hart Ln, Tottenham, London N17 0AP

Where to eat near the Spurs stadium

Find out where's good to eat close to the new Tottenham stadium.