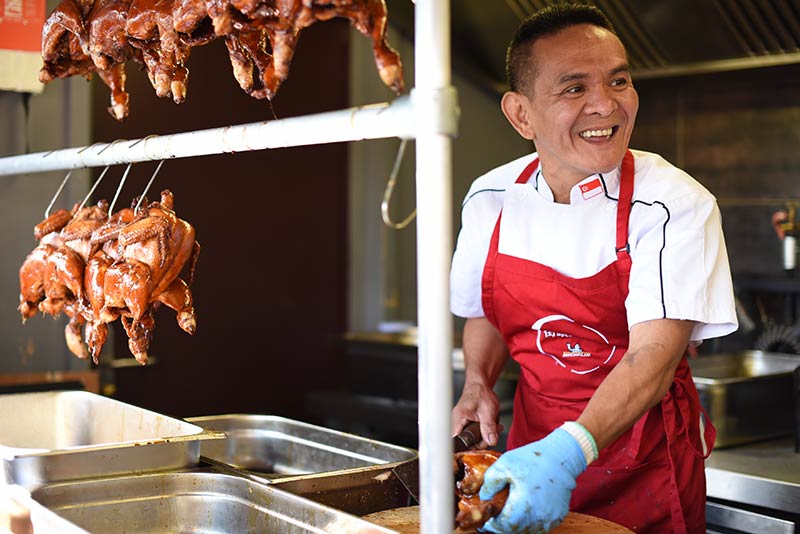 If you’ve been kicking yourself for missing Hawker Chan’s temporary visit to London last year - and considering the frankly epic queues, we don’t blame you - then here’s some very important news.

The Michelin-starred street food chef is returning once again to King’s Cross this March! Which means you’ll have a second chance to try his legendary (and very affordable) Singaporean cuisine. And this time he's being joined by Singapore's Bib Gourmand-winning A Noodle Story. The appearance is part of KERB’s ‘Taste of Singapore’ pop-up, all put together by Singapore Airlines, Singapore Tourism Board and Changi Airport Group.

Last year, Hawker Chan’s three-day lunchtime pop-up with KERB was a seismic event, generating queues that made headlines as hundreds of Londoners waited patiently for a chance to try his £6 soya sauce chicken and rice. The chef says he was “overwhelmed with the response”.

Now, he’ll be returning under the same conditions, operating between 11.30am and 2.30pm out of a stall in Granary Square. This year, he’ll be cooking up a new dish of char siew pork and rice, still priced at £6, so even if you tried the chicken last year, it’s still very much worth the mission.

A Noodle Mission will also be on hand serving their Singapore-style ramen, which won a Michelin Bib Gourmand award in 2016.

There’ll only be 300 portions up for grabs each day, so it’s very much worth getting down extra-early as all signs point to this being just as popular as last year’s event, if not more.

The date for your diary is 6-8 March, Wednesday to Friday. And if you are heading down, we wish you the best of luck, (and fingers crossed for good weather).

Where is it? KERB King’s Cross in Granary Square, London N1C 4AA