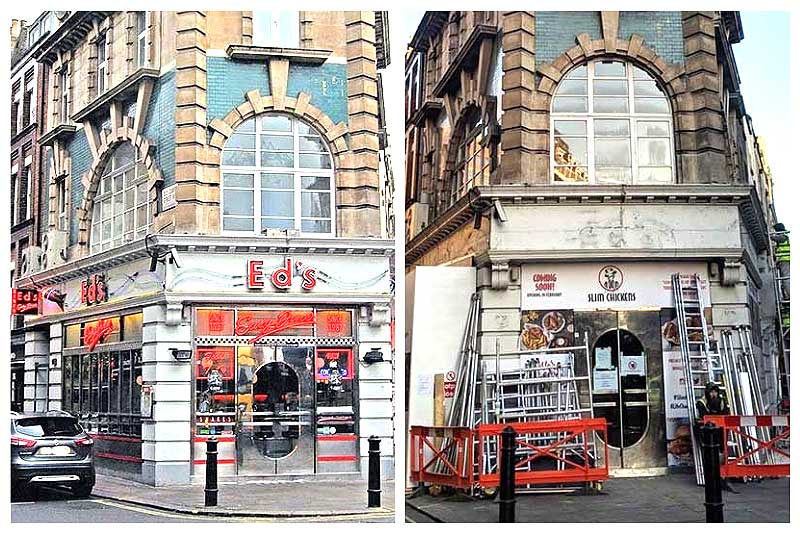 London's restaurant scene is constantly in churn - with new restaurants replacing old. That's the nature of the beast. But even we admit to being a bit surprised at our emotional reaction to the news yesterday that Soho classic Ed's Easy Diner was no more.

Reported in a tweet by The Guinea's GM Oisin Rogers, it transpires that the American diner on the corner of Old Compton Street and Moor Street has been taken over by another American import - Slim Chickens.

The diner first opened its doors back in 1987 when it was genuinely an exciting London opening. The neon sign, the retro diner fittings were all a big deal. And for almost 20 years that was it for owner Barry Margolis - there was slow growth with the opening of two more restaurants in London. But after Margolis's death the business was put into trust and eventually sold to a company which did the now-traditional thing of trying to take the chain national. It boomed to almost 60 restaurants before crashing into administration.

Now the company that bought out the remaining diner spots, and also owns American import Slim Chickens, is switching all the Ed's Easy Diners to chicken shops.

The news was met with dismay on Twitter with many recalling their visits there from back in the day.

That Ed's Diner is where I first met Simon Ricketts. That's very sad.

Crumbs! Where me and @baconchop had our first date (after ice skating at NHM).

And while some weren't that sad to see it go...

not at 11, full of booze, in need of a steadier and unwilling to pretend to be sober to get served

Everyone agreed on one thing.

Yes. I loved the neon

This is the second opening in London for Arkansas chicken purveyors Slim Chickens who first brought their brand to London last year.