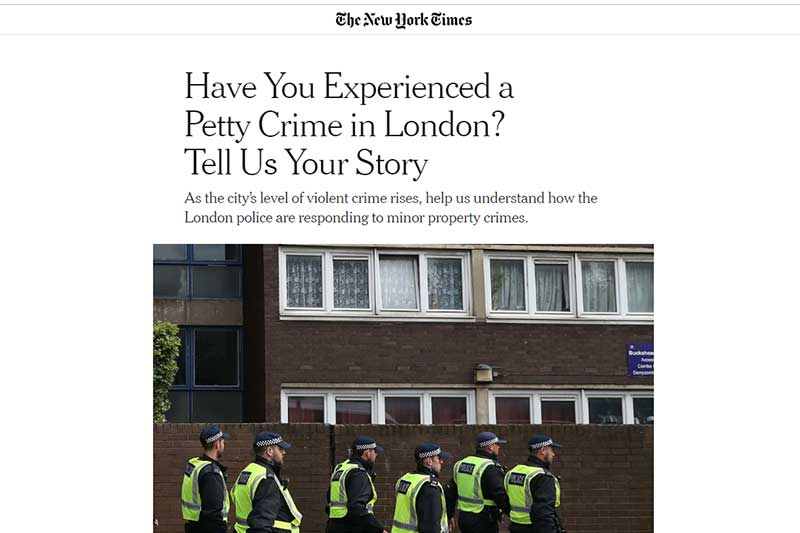 You'd have thought the New York Times would have known by now how Londoners react to negative press about them. Earlier on this year, a travel writer for the newspaper provoked widespread trolling with his thoughts about our dining scene. And now, the paper is at it again. Today, they foolishly asked their Twitter followers to share any 'petty' crimes they might have experienced in London. They may not have got quite what they were expecting...

Have you experienced a petty crime in London? Click to tell us your story.
(Your submission may be selected for publication.) https://t.co/MRvmXdlYC8

There was this really rude MAGA hat guy who shoved some people aside and put his phone in my face. Took a photo without permission. I was just strolling along with a few hundred thousand of my friends who share my dislike of your president. It's dangerous here, honestly.

My olive tree was stripped almost bare of fruit by thieving parakeets, squirrels and pigeons, in broad daylight. Police were called, and, unable to arrest the perpetrators, helpfully suggested I try a lemon twist in my next martini.

I have seen, with mine own eyes, a man (obviously not a gentlemen yet in seeming control of his faculties) wearing suede shoes in town. That is all.

Some fella was standing on the left hand side of the down escalators at Shepherd’s Bush today. I tutted VERY loudly as I passed #meanstreets

On the London overground yesterday a man had an unwhispered THREE MINUTE mobile phone conversation with who we can only presume was his wife. Dinner ingredients were discussed as was the upcoming dog walking rota. I was horrified. Other passengers didn't even look at each other.

The person I was behind at the tube barrier yesterday waited for the person in front of them to go through and the barriers to close, before using their oyster card. AND NOBODY DID ANYTHING, even though I tutted and rolled my eyes #pettycrime

Someone on the train this morning had the keyboard sound on on their iPhone. I naturally called the police on them.

Huge problems here in Zone 3 London. Foxes keep procreating noisily through the night in my garden, a pigeon keeps eating my cabbages and a squirrel keeps digging everything up. Total horror show.

Yes! The piteous amount of creme fraiche (sour cream to you eejits) with this tart at an otherwise terrific restaurant in SoHo pic.twitter.com/xwpHEZKheN

My “friend” came into the West End wearing brown. I asked if he was “going ratting?” and he’s gone home to change. I’ve informed his (now former-) tailor.