As Dinner by Heston reopens after the fire, we check out some of the new dishes being served up 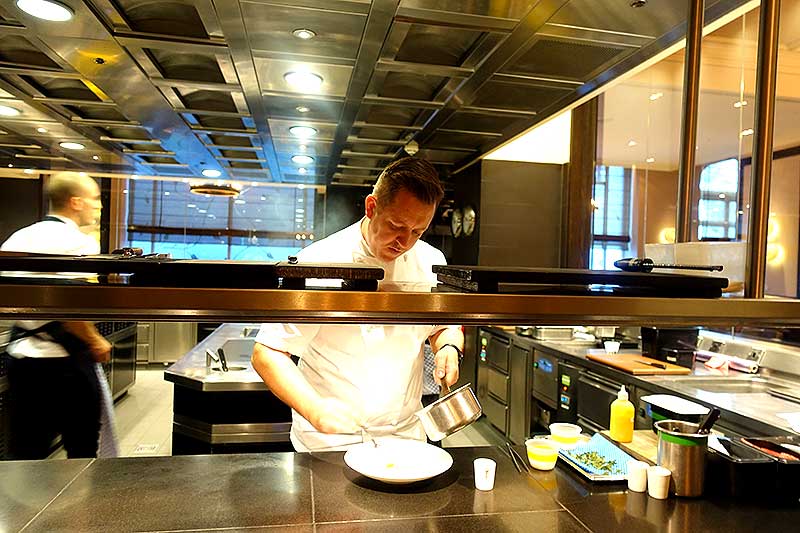 It's an unusual day at Dinner by Heston Blumenthal. Normally lunchtime, as the Christmas season in London kicks off, would see this two Michelin-starred restaurant packed to the gills. But today I'm the only one eating.

That's because the team here are on the verge of reopening for the first time in six months, following a devastating fire at the hotel. They've spent the weekend doing some practice runs with friends and family - "To make sure everything works and everyone knows what they're doing," explains Chef Director Ashley Palmer-Watts. And tomorrow everything kicks off.

Six months ago, it was mid-afternoon when Ashley first heard of the fire from Dan his head Pastry Chef. "He texted to say 'just to let you know we've been evacuated from the hotel, there's a fire.' I asked if everyone was OK and how bad was it and he sent me a picture and I was like Oh my God! We were looking at the BBC and googling news reports just trying to see what was happening."

What had happened was a huge fire involving - at its peak - 120 firefighters and 20 engines. It was 48 hours before anyone was allowed back in the kitchen. "Imagine a kitchen in full flow, getting ready for the evening service - everyone just had to down tools and leave. Just turned the stoves off. There were lettuces blanching in water. The staff had no house keys, no clothes, no-one could get home, they didn't have any money. When the guys finally came back in it was a very strange situation. Food was out, fridges were left open - absolute carnage."

When the guys finally came back in it was a very strange situation. Food was out, fridges were left open - absolute carnage

In the immediate aftermath of the fire, there was talk of the hotel reopening in a matter of weeks "but that was before anyone had really assessed the damage," explains Ashley. "All the guys here wanted to know was when they were coming back to work. Once you'd got over the 'I've got two months off in the best summer we've ever had', they really wanted to get back in the kitchen."

What happened instead was that Ashley and Head Chef Johnny got on the phone and started sorting out stages (work experience) for the junior chefs at other Michelin-starred restaurants. "Everyone was fully paid - they even estimated what the service charge money would have been based on a forecast."

As for the senior staff, they went out to Bray (where Heston's Fat Duck restaurant and development kitchen is) "It allowed us to make them more a part of that development process than they're normally able to be. We wanted to use this time as an opportunity to do all the things we wanted to do but either couldn't because we never had the time or because we had a restaurant to run."

One way they used the time was to explore new suppliers - which is a big deal when you're serving 85,000 diners a year. "We use 600 diver-caught scallops a week and that's just one element of one dish. Whenever we use a product we need an iron-clad guarantee that we can get it."

We wanted to use this time as an opportunity to do all the things we wanted to do but either couldn't because we never had the time or because we had a restaurant to run.

One new supplier is Andy Harris at The Vinegar Shed - the former editor of Jamie Oliver's magazine. "He's so passionate. He started getting in the best vinegar from all over the world. And he's also started making them, so we're going to be able to make bespoke vinegar with him. The saffron we're using from him is extraordinary. We'd been using the best but this just blows that out of the water. And we found a beautiful smoked olive oil from when they roast peppers."

The 'time off' also enabled Ashley and his team to work on a series of new and improved dishes for the menu at Dinner. Ashley gives us a look at a massive 175-page document on his computer inspired by discussions with people like Holly Russell at the British Library and Marc Meltonville at Hampton Court - historical dishes and ingredients become a jumping off point for new recipes.

"Each dish goes on a little journey of its own," says Ashley, "Some take a long time, some are a lot clearer and quicker. Sometimes you end up somewhere completely different to your original idea, other times you're much closer. And when you start bringing it into the kitchen is when you start refining it to the next level. It's all about the repetition - it's a really long process.

Later on, he shows us the full written out current recipe for Rice & Flesh. It takes up an entire binder, split into the different processes required to make every element of the dish. Just reading it makes my head hurt.

Each dish goes on a little journey of its own

As he explains, the menu here is constantly changing. "We might bring dishes back in a revised version, or phase new ones in throughout the seasons, give others a rest." New dishes include a vegetarian dish of Roast Cauliflower (c.1730) with smoked brown butter, red wine, truffle and macrows and a Spiced Squab Pigeon (c 1780) with onions, artichokes, ale and malt.

Clearly they're doing something right. The minute word spread that the restaurant was reopening for bookings once more, the lines went crazy. "We're probably 90% full every day." And if that wasn't enough of a boost, midway through our chat the folk from Michelin turn up to present Ashley with his 2019 plaque with two Michelin stars on it.

Dinner by Heston Blumental at the Mandarin Oriental Hotel reopens on 4 December 2018. We were treated to a selection of new and improved dishes from the new menu. Here's what we ate with Ashley's description of the story behind them. 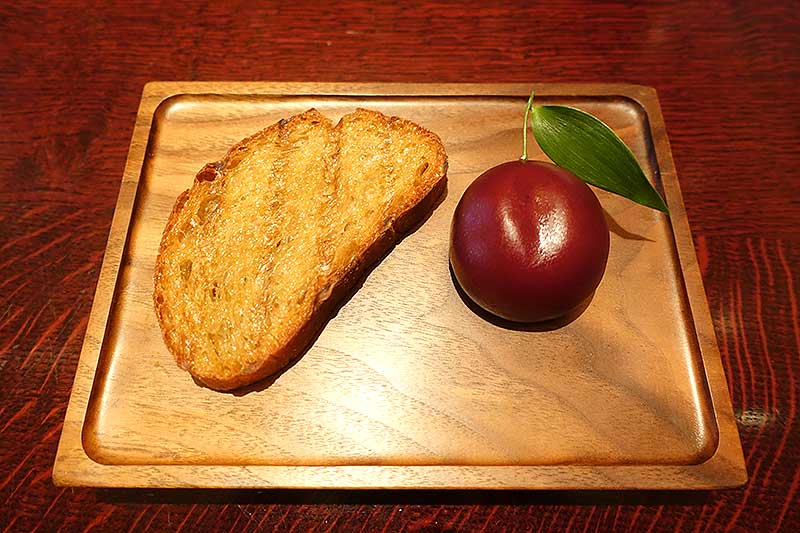 "We used to take two hemispheres of frozen parfait and smoothe them together. The amount of time it took, plus the wastage of not doing it properly and there being a visible join line meant head chef Johnny has spent the last few years making it his life's mission to find a single mould. We've spent £5k on them and they'll save a lot of time. So even Meat Fruit is an example of how no dish stands still.

We bring this spiced red wine plum version back for the whole month of December. When it used to have foie gras in it, it was even more amazing, but we got completely bullied and harassed to take it off the menus at all our restaurants." 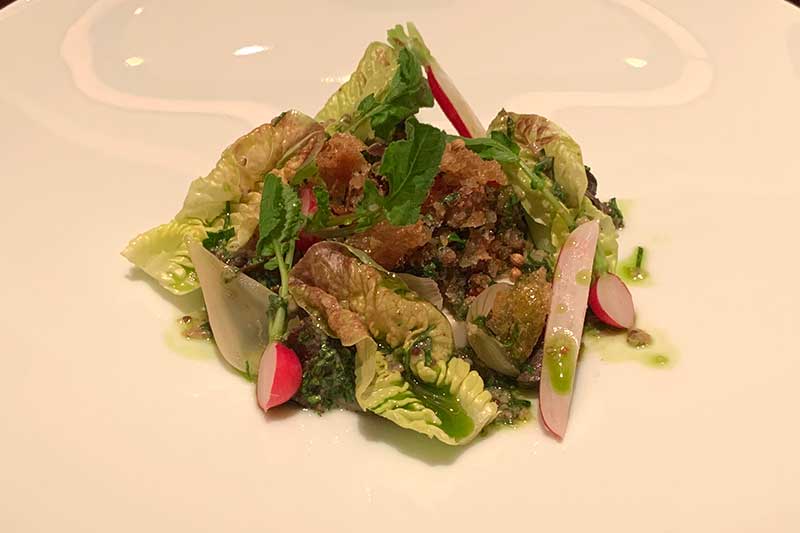 "We originally started roasting this in a long bone, then we had a version with a Welsh cake. Our roasted marrow is very different in texture to just having warmed bone marrow. We wanted to make a smoked royale (anchovy and mushroom egg custard) and have that on the base, so the texture of the bone marrow is the royale at the bottom of the dish and the roasted bone marrow with breadcrumbs, lemon zest, mace and anchovies, parsley garlic and diced shallots is what's on top.

There are also pickled vegetables, garlic snails with lovage and a grain mustard dressing." 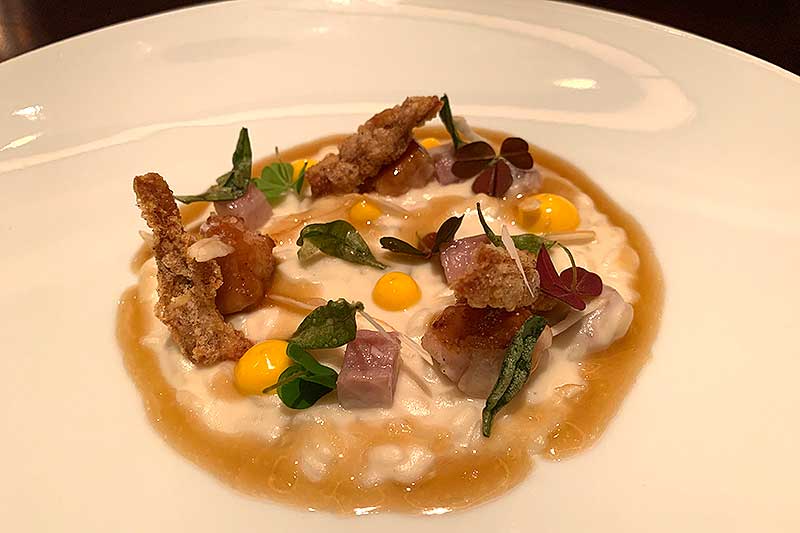 "This was another dish we never took off the menu - the saffron rice with the calves tail. We've kind of torn that apart. When we first developed this one it had a broth with almonds and saffron. I wanted to take the almonds forward into a savoury dish in a British way.

We made an almond butter, based on the acid butter we made for our saffron rice. We wanted it to have a pure almond flavour but still with the saffron component. We've also incorporated a different flesh - so we've got veal sweetbreads and also wild smoked eel and cripsy chicken feet. This is a little bit more challenging (than the original dish). Underneath is the saffron emulsion, pickled daikon and compressed apple. And then there's a light, fragrant chicken jus that we mix with that smoked olive oil and sauce the dish at the table." 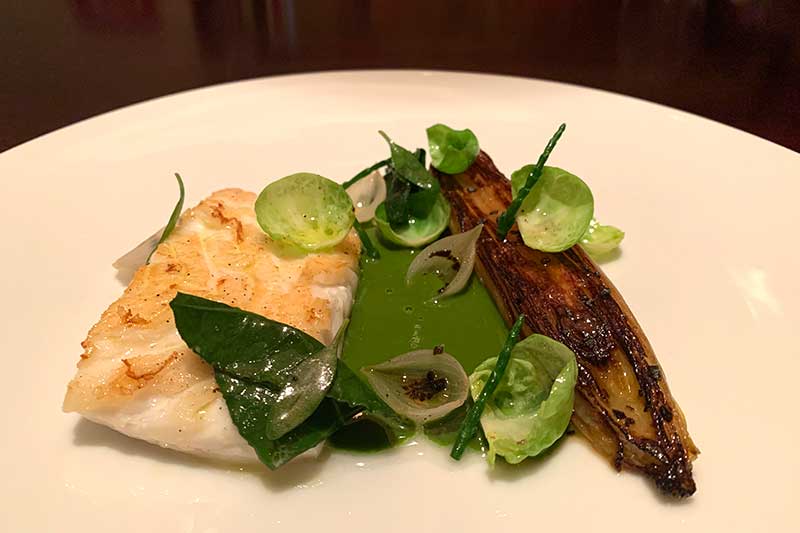 "Most countries have a green sauce - our one is usually a mint sauce. But here we put garlic, parsley, lovage and mustard into a very green compound butter, then we take a mixture of chicory pickle infused with black cardamon and liquorice, a green coffee cold infusion which has texture like the tannin when you drink wine - it's a feeling as well as a flavour - and green chilli juice and green pepper juice.

We serve it up with turbot along with a lovely braised chicory. This dish went on just before we closed." 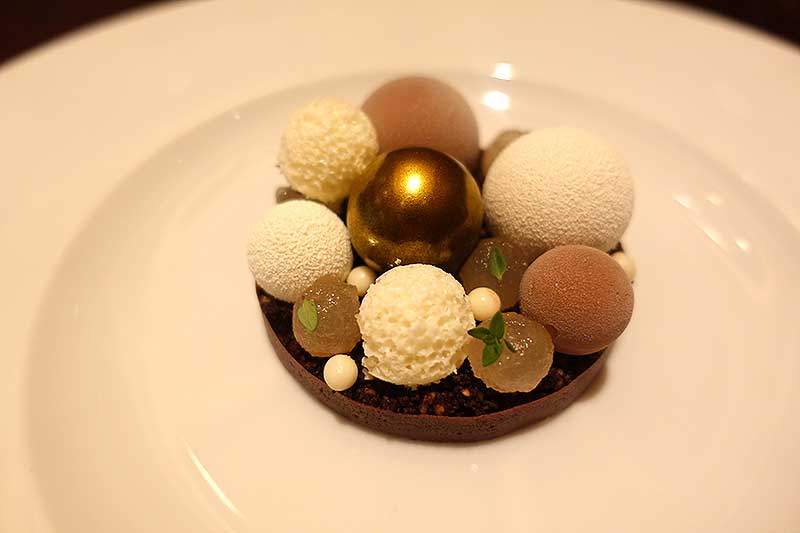 "In Hampton Court, food historian Marc Meltonville discovered an old storage room off the courtyard and found it was a chocolatier's room that George I had installed. That inspired me to look for the first things we were using chocolate for in this country and I read an amazing one about chocolate drops. 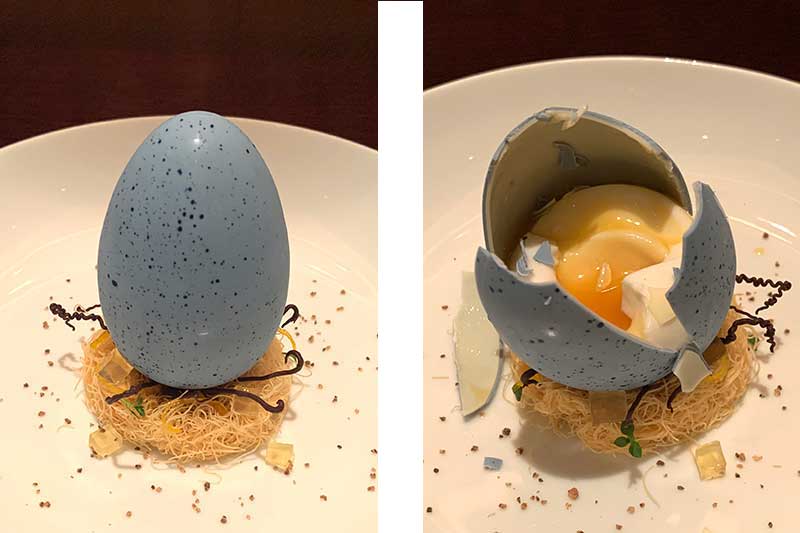 This 91-step dessert was first created for the television series Historic Heston, and is being served up at their Melbourne restaurant too. The chocolate shell is filled with verbena and coconut pannacotta on a coffee parfait and sits on a nest of honey and citrus flavoured katafi.

How to book? Book online here.