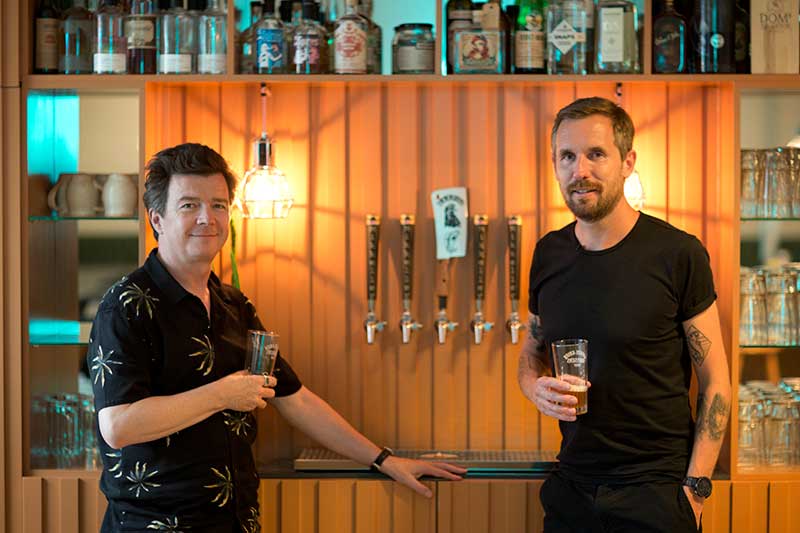 In a nutshell: Rick Astley opens a bar in Shoreditch

Summing it all up: They're an unlikely pair but gypsy beermaker Mikkel Borg Bjergsø has teamed up with 80s pop icon Rick Astley to open a super hip beer bar in Shoreditch. I know!!

Rick Astley seems like a sound guy. The kind of guy who would pop round to a neighbour on Christmas morning for an autograph session and a glass of fizz.  So we're not one bit surprised that he's opening a bar in London.

What we are slightly surprised by, is how cool it sounds. Cult Danish beer brewer Mikkel Borg Bjergsø is the person who's teamed up with Astley to open the first Mikkeller Bar in the UK.

The company has bars all over the world, from San Diego to Taipei. And in each you'll find taps from Mikkeller as well as other top class international breweries. Oh and they also serve up cheese, snacks and meats.

The unlikely pair first met after a rumour spread that Rick - who's married to a Danish woman - apparently lived in Denmark. He doesn't. But it sowed an idea in fan Mikkel who invited Rick to brew a beer together - ‘Astley’s Northern Hop Lager.’

Now even the design of their London space together will feature Astley's lyrics. As the bar's designer explains: "“We were inspired by the mood of one of his 80's videos, which we think has a unique sweetness and romance while having a kind of 'Italian bohemian bistro atmosphere'. More concretely, we use his lyrics in small details." I know - we BADLY want to go now. Even more so now we know that Rick is performing on the opening day with two small sets planned.

"There's going to be fantastic beer flowing and a little bit of music as well, as I'm going to be playing some songs," says Rick.

Launch offer: Rick will perform at 5pm and 7pm. And they'll be handing out free cans of Astley's London Lager from 1pm.