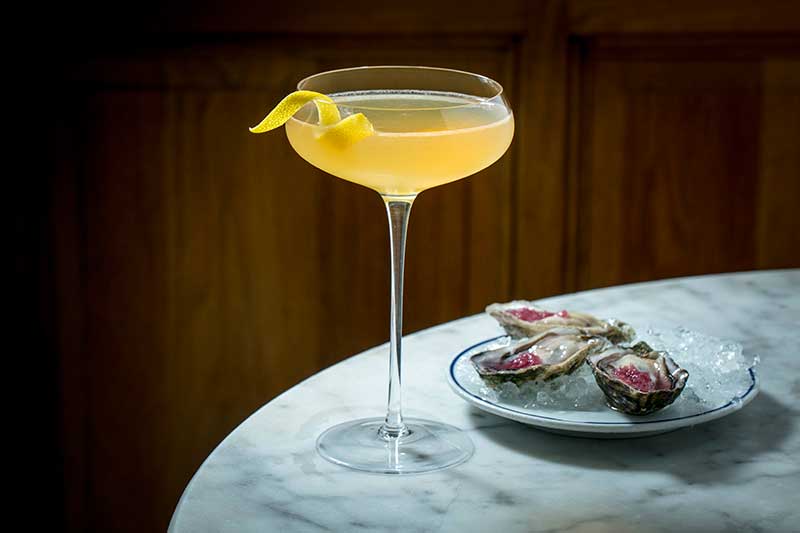 In a nutshell: Cognac house take over the downstairs bar at Bibendum

Summing it all up: Cocktails by Rémy Martin and bar food by Claude Bosi - sounds like a cocktail bar match made in heaven. Thankfully it's closer than that - taking over the downstairs bar space at Michelin House in South Ken.

For the past three years cognac company Rémy Martin has run a pop-up private members club that's returned annually to the streets around Soho. LA MAISON RÉMY MARTIN. But for their fourth year they've decided to put down permanent roots. And from this week they'll be taking up what they're calling a permanent residency at Bibendum in South Kensington.

The (it's all in caps, we're not shouting, honestly) LA MAISON RÉMY MARTIN RESIDENCY AT CLAUDE BOSI can be found downstairs where the previous bar used to be, next to the Oyster Bar and next to the separate side entrance to Bibendum restaurant. Essentially it's a walk in space, but if you fancy dropping in after work it can be booked between 5-7pm. The space has been designed by Sir Terence Conran himself who says of the design; "In some ways the Rémy Martin Bar is a visual homage to Monsieur Bibendum and I have tried to capture his cheeky effervescence, especially the back shelves which reflect his glorious, 2 star undulating belly."

The new bar will be dedicated to Cognac Fine Champagne and for the next year will run a series of food and drink events and masterclasses. They've come up with a new cocktail list - the drinks will also be available in the restaurant upstairs - choose from maybe a Royal Sidecar made with Rémy Martin 1738 Accord Royal and Cointreau or the Maison Old Fashioned with Rémy Martin XO, fig liqueur, salted honey syrup and bitters.

Best of all will be the bar food menu, created by Bosi himself, like crispy ravioli of nduja sausage or fried chicken with crab mayo as well as Petrossian caviar and Morecambe Bay oysters.