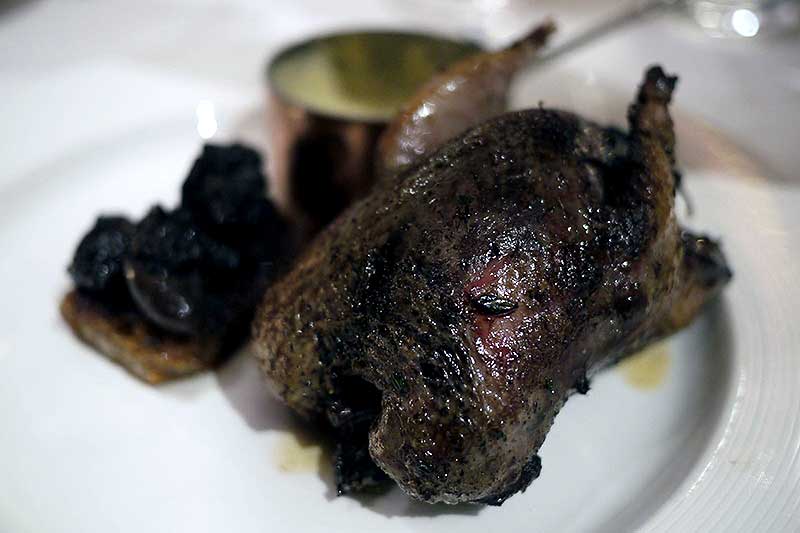 It may be one of London's oldest restaurants, but there's a new influence in the kitchen at the Guinea Grill.

Chef Nathan Richardson and the Guinea's GM Oisin Rogers go way back - they worked together first at the Ship in Wandsworth and then at Rogers' last place, The Canonbury Tavern in Islington.

After a short stay down under, opening up a restaurant in Brisbane, Nathan's now back in London and has taken on the position of Head Chef at The Guinea. "He's a fanastic chef," says Oisin of his new hire, "a really good guy. He's made a few minor tweaks to improve what we've always been doing really well."

The key word is minor - we don't think the Guinea's devotees would be impressed by too much change - but you can expect a few new dishes, particularly in the bar. There Nathan's adding lamb chops and dry-aged bone in rib steaks from the grill, devilled kidneys on toast and Welsh rarebit.

In the restaurant itself new dishes include wild sea trout with warm fennel and grape salad, potato and a Wensleydale and potato pie. Of course there's currently grouse and other game on the menu, but you'll be happy to hear that the Guinea's famous steak and kidney pie recipe remains untouched.

In addition, they've got a new fish supplier, bringing them dayboat fish from Brixham. So while the only fish on the menu used to be Dover Sole, that'll now be joined by turbot, brill, sea trout, fresh mackerel etc.

"It was always very good - but we're heading towards excellent now," says a pretty happy-sounding Oisin.

More about The Guinea

Grouse picture courtesy of Chris Pople of Cheese and Biscuits