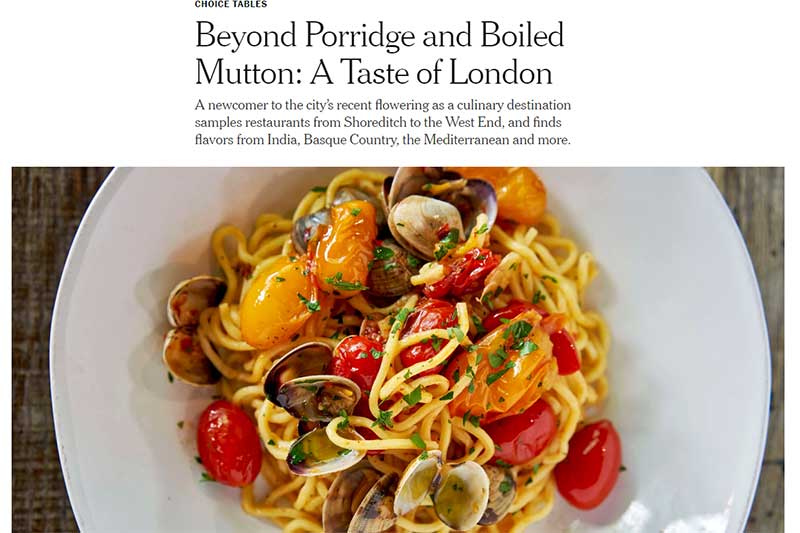 Well you've got to hand it to the New York Times. We're not sure how many people might have read this week's piece on eating out in London, had it not been for this headline.

Beyond Porridge and Boiled Mutton: A Taste of London

Seems that writer and Washington resident Robert Drapers was simply ASTONISHED that the London eating out scene had progressed beyond feeding folk who were "devotees of porridge and boiled mutton. Having not visited London for a decade, when he thought the city offered "a sallow and predictable dining experience" he proceeds to head on a tour of London districts.  On his travels he discovers many gems including Gymkhana whose cuisine, he's thankful "does not defer to the leaden palate of Olde England". <eyeroll emoji>

Ten years ago London restaurants mainly served porridge and boiled mutton, but now you can get food from all across the world, claims this NYT review https://t.co/Wsgv0HgR3C

Instantly bringing out the best of Twitter in response

There used to a stall on every street corner ladling out bowls of porridge and mutton. You could get that, a bag of broken biscuits, a pewter mug of warm beer, see Arthur Askey in panto at the Palladium, take a hansom cab home in the fog and still have change out of half-a-crown.

The @nytimes has discovered that British cuisine has moved 'beyond porridge and boiled mutton'. Other things that are surprisingly off trend: workhouses, colonialism, landlines, urchins, top hats, Cockneys, spotted dick, mods, rockers...

I'm so relieved to learn that, **at long last** there's something for everyone in London’s restaurant scene and not just the usual porridge and boiled mutton... https://t.co/YuyxJppCHL

And a few were keen to get the writer to enlighten them.

What is boiled mutton? Asking on behalf of all Londoners

Although at least one chef feels we've been here before.

Ok first london kitchen to push out an authentically delicious mutton and porridge dish on insta wins... oh god none of this really matters does it? It's like mince on toast all over again.

But actually now that you mention it, mutton doesn't sound half bad

I could go a nice bowl of boiled mutton, maybe green sauce

Or is someone missing out on a golden (or at least porridge-hued) business opportunity?

This seems insulting, but if you told me a boiled mutton and porridge restaurant had opened up in Bethnal Green, I'd believe it https://t.co/Z27DLZor6Z

London restaurants you can eat mutton in right now