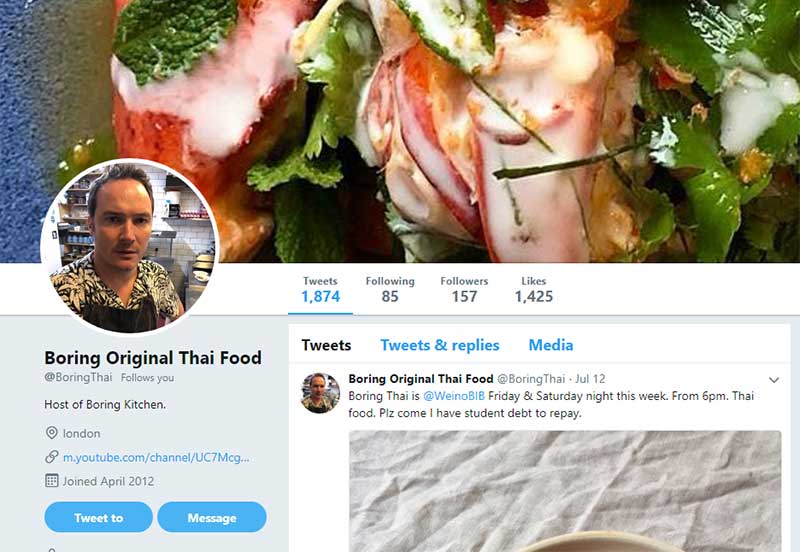 Every so often, a restaurant story blows up in real time and over the past weekend, the one to watch involved a chef, Shaun Beagley, who has been working at popular East London Thai restaurant som saa.

I thought this was some absurd parody account but it is actually a real thing, i have loads of mutuals and he's a chef at som saa???? absolutely fucking shameful behaviour pic.twitter.com/YrKTupDOUF

Hey there @somsaa_london do you think this is cool from one of your chefs? https://t.co/qrqoREI9Ac

And was supported in that by food writer Meemalee, who also spotted that Beagley wasn't just posting racist stuff, but also "makes nasty jokes about black people, gay people, Muslims and women."

This is it, right.

Not just some nameless keyboard warrior or a frustrated 13 year old.

This is someone who makes a *living* cooking Asian food making nasty jokes about Asian people.

This for everyone at the back is the very definition of cultural appropriation.

And god - the stuff he's been putting up is SO bad. We don't want to give it more publicity and, quite frankly, I don't even want to type the stuff he said, but if you want to know how bad, this video would give you a good idea. (The original youtube video has now been taken down so thanks to David Jay Paw for saving it to reference).

The good news is that the restaurant has acted swiftly and decisively in the matter.

But somehow - we don't think this will be the end of it.

And so that proved. The latest turn is that the person who originally brought everyone's attention to this - midnightbakerliz - has now received rape threats on Instagram.

It makes me so incredibly sad to watch the discourse and fall out surrounding race happening in the London food scene right now.

@midnightbakerliz who was one of the first to speak out against the racist chef has received threats, which has now been reported to the police.

And, days after this story first broke, som saa's Andy Oliver finally put out a comment on the whole awful s**tshow. Not before time, many would say.

Looking forward, it's good to see several high profile chefs now showing their support and adding their thoughts on the issue.

Repeatedly referring to a racist, not by his actual name but instead as a "social media persona" is as good as saying he's not racist *it's just internet* ... Massively weak. If you call a black person a monkey or make videos in faux accent you are racist on or off the internet.

I was going to stay silent on this but as a white guy that draws inspiration from Asian cultures that’s too much like the standard unhelpful white guy behaviour. pic.twitter.com/BJhimxpSBP

And if you want to stay fully up to date with this as it happens, you can't do better than follow Meemalee's Twitter feed.