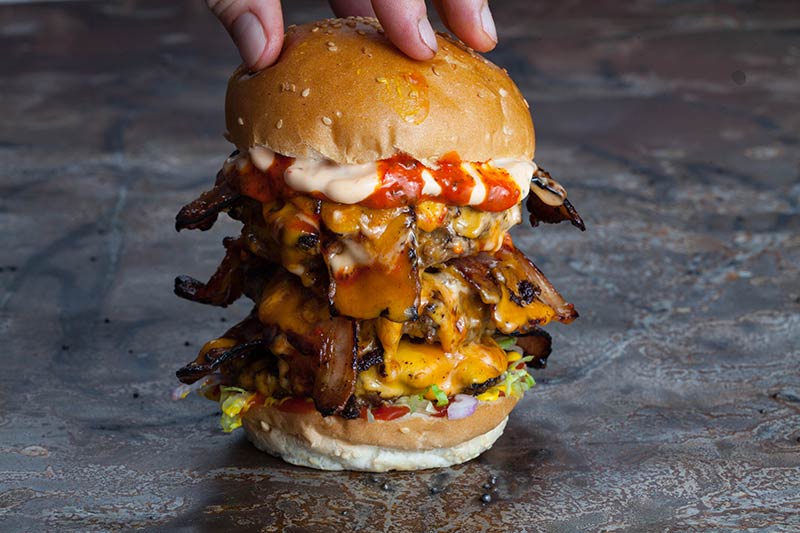 In a nutshell: Burgers plus an extensive vegan menu at the new Haggerston branch of Stokey Bears.

Summing it all up: The new Stokey Bears site, just down the road from the original, has a casual bar vibe, with counter service, a menu of vegan burgers and shakes, and an outdoor beer garden.

At this latest Stokey Bears, the menu features the same beef burgers as the original, including the ‘Grizzly Bear’ topped with double oak-smoked bacon and bacon jam, the classic ‘Burger Bear’ cheese burger; the ‘Angry Bear’, doused in the Rib Man’s Holy F**K hot sauce and helluvapino relish; and – not for the feint hearted – the ‘Triple Threat’, which combines all three into one stacked burger.

New for Haggerston is a range of vegan burgers – there’s a Stokey Bears veggie patty made from kidney beans, salsa, coriander, chilli flakes, rubbed in BBQ spice which comes in the same ‘Angry’, ‘Grizzly’ and ‘Triple Threat’ options. There’s also a seitan ‘chicken’ burger, and the Koala Bear, made from spiced bean burger, avocado, salsa, lime and coriander coconut yoghurt.

Drinks-wise, there's a big selection of local beers, cocktails, and hard shakes. On draught there’s local London beers from the likes of Beavertown and London Fields breweries, as well as a big range of cans, and cocktails on tap from London Cocktail Club, including the Elderfower Gin Fizz and Sunset Spritz, a twist on Aperol Spritz.

A range of soft and ‘hard shakes’ made with Dalston’s vegan-only Hell Yum ice cream include Mint choc chip, Cookie Monster, Chocolate, Hazelnut, coconut. Regular shakes will be made with south London’s Ice Cream Union and feature a range of cereal-inspired flavours such as Corn Flakes, Crunchy Nut, and Coco Pops.

On top of this, Stokey Bears Haggerston will also open for brunch at 10am on weekends serving bacon, egg and cheese brioche buns, plus unlimited refills on filter coffee.

When does it open? Open now. Vegan menu available from Monday 9th July