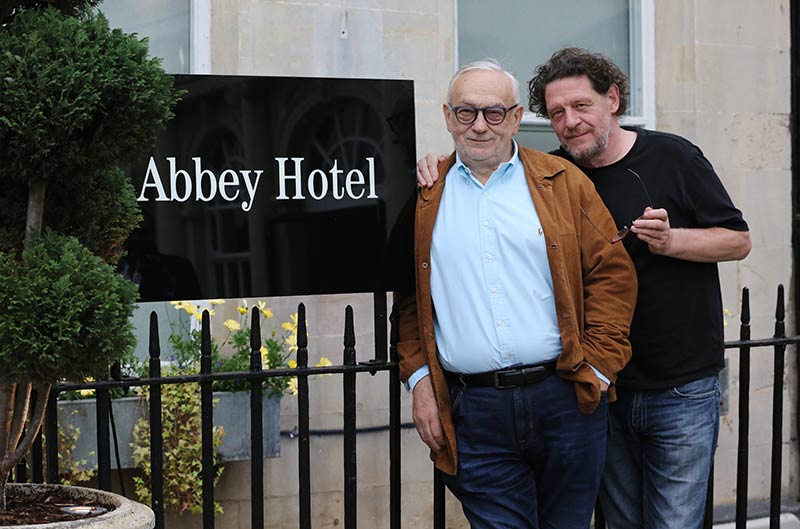 So we missed this yesterday, the - shall we say somewhat surprising - news that Marco Pierre White and Pierre Koffmann are teaming up for a new restaurant in Bath, Koffmann & Mr White's in the city's Abbey Hotel.

Now, while Koffmann has retained his reputation as one of the best chefs in the country (only recently winning a lifetime achievement at the OFM Awards) it's fair to say that time hasn't been quite as kind to former Knorr spokesman Marco Pierre White. He's still opening restaurants across the country - the most recent being London's Mr White's English Chop House. As Marco used to work for Koffmann in the kitchens, maybe this is a little bit of going back to school?

I remember giving Marco a job at La Tante Claire - he was late for his first two shifts, but quickly returned to my good books when he boned a delivery of duck and pigeons for me - they were absolutely perfect,” says Pierre. “The kitchen is where I am happiest, so it’s a joy to be working on new dishes, and to be working with Marco again

For many, many, many years I reflected on my career and one of my deepest regrets was not spending more time with Pierre in the kitchen. I am looking forward to being the apprentice once again. Personally, I’m also thrilled to be opening in Bath, a city which is very close to my heart.

That's all we know about the restaurant so far - nothing about who's in the kitchen or the menu - but if we get details, we'll share them here.

More about Koffmann and Mr White's