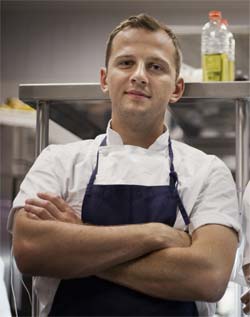 As one third of the original London dream team the Young Turks, James Lowe, there's a lot riding on his first solo restaurant endeavour.

But while young James works out where his first place will be, there's a special dinner coming up that should keep his many fans happy. He's taking over The Rooftop Cafe near London Bridge for a three day residency this month in collaboration with Tutto wines. Tutto wines, for those of you not in the know (like us) are a young company formed last year by Alex Whyte and Damiano Fiamma who wanted to share with Londoners the wines of Italy they love to drink.

James's menu for the residency is still being worked through, but we've got a sneak peak at some of the dishes that could be on the final version. There are some snacks of smoked eel sandwich with pickled gooseberries (look out Jeremy Lee!), pickled pig's ears, burnt baby carrots with bread sauce and lovage and fried sand eels with seaweek mayo.

Mains could include ramson and pheasant egg; raw Dexter, nasturtium  and oyster as well as crab & Jersey Royals with desserts like chocolate mousse, milk ice and salt caramel as well as rhubarb and creme fraiche sorbet.

Tickets cost £55, which buys you four courses of James' food with a selection of Tutto wines to match. There's dinner on Saturday 20th April, lunch on Sunday 21 April and dinner on Monday 22 April. To book (and you'll need to be quick) go to eventbrite.