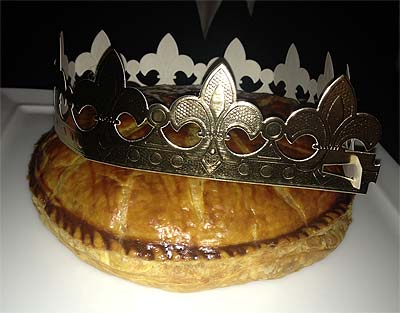 Well it was wall-to-wall chefs and restaurant folk at the party last night at The Connaught to celebrate Helene Darroze's Galette Du Rois - the cake baked in celebration of The Epiphany.

Our host, Paula Fitzherbert, Group Director of Public Relations at both the Connaught and Claridges and declared herself delighted with the recent well-received BBC documentary on the latter. Such was the programme's popularity that Claridges General Manager Thomas Kochs now has to regularly 'do the rounds' and chat to guests and diners all eager to meet the star of the show.

As you'd expect from a party hosted by Helene Darroze, the canapes were bloody marvellous. Our favourite? A toss between the beetroot and foie gras macaroons and the lobster pasta. But maybe our favourite bit was trying a martini from the Connaught's martini trolley which last week was declared 'best martini in the world' by the author Jay McInerney. Made to order with our bitters of choice (lavender) it was a pretty excellent way to blow off any lingering depression from Blue Monday.