Som Saa lands in Spitalfields for their first permanent restaurant 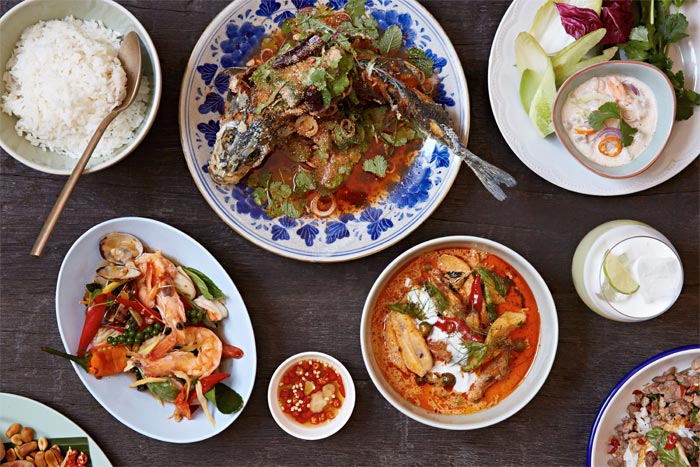 The transition of Som Saa from popup to permanent restaurant was on ours (and most other people's) lists of restaurants to watch out for in 2016. And now we've got the full details to share with you.

The team, comprising of Andy Oliver, Mark Dobbie and Tom George, will be opening on Commercial Street in Spitalfields, taking over an old fabric warehouse.

If you'd been to their pop up in Peckham or residency at Climpson's Arch, you'll know roughly what to expect. Their new menu will continue to bring together seasonal British produce with Asian ingredients in regional Thai dishes. They'll make everything from curry pastes to fermented pork sausages and coconut cream in house.

What is new is that while they've previously focused on dishes from the North and North-East (Isaan), at the new Som Saa, the kitchen will showcase dishes from around the regions.

To begin with they'll be open for dinner only, bringing in a brunch and lunch menu six weeks later. Dishes on that brunch menu sound equally enticing:

As for drinks, there'll be a dedicated bar with its own menu of (liking the sound of this) Thai drinking foods, such as fried, Isaan style, minced chicken cakes with kaffir lime leaf, dry chilli and toasted rice or miang lao - palm sugar, fried garlic, peanuts and chilli wrapped in pickled mustard greens. The cocktails are similarly inspired by Thai ingredients. You can put us down for a Krahang Old Fashioned with sandalwood, smoked buffalo trace and mandarin peel.

And if you're staying off the sauce how about some of Postcard teas such as a Northern Thai oolong flavoured with toasted sticky rice?

“We're moving som saa to a more accessible part of East London but we will definitely be keeping the big flavours and the buzzy, fun vibe we had at Climpson's Arch” says Mark.

Six weeks later they'll be open for lunch Tuesday - Friday 12pm -2.30pm and for brunch: Saturday - Sunday 11am -2:30pm. They'll take reservations at lunchtime, but only for larger groups in the evening with details of the booking line going live on their site on 11 April. For more from them, follow them on Twitter @somsaa_london