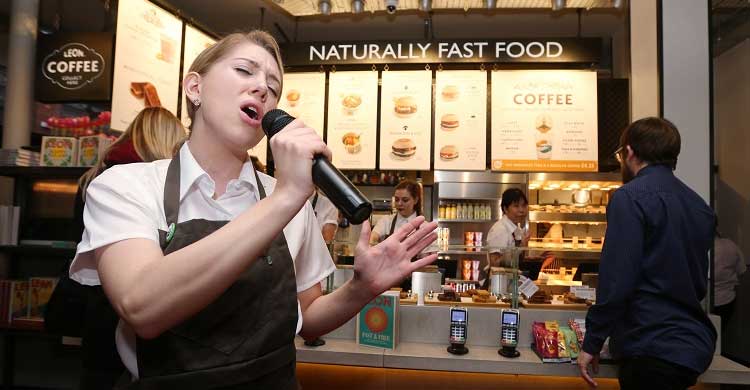 In a nutshell: LEON brings its usual healthy fast food to the West End, served to you by singing staff

Summing it all up: Healthy lunchtime chain LEON has auditioned 40 aspiring luvvies to create a team that can not only cook, but also sing to customers at the same time.

If you know all the words to Les Mis, and can’t get enough melodrama, cabaret and spectacle, then head to LEON’s new branch in the West End. Similarly, if you can't change the channel fast enough when everyone starts singing, you should almost definitely steer well clear.

The new Shaftesbury Avenue LEON have decided to give things a bit of a Theatreland twist, and while the appearance of the usual menu is nothing to sing and dance about (sorry), there’ll be some noticeable changes. There’ll be a red carpet leading up to the counter, a glittery cover up for the LEON lady - and a crew of all-singing staff who'll croon for customers while they whip up their lunch.

We’ve been told that diners can expect a live track every two to three songs, and LEON will be rewarding staff with vocal training and master classes so they can get one step closer to realising their West End dreams. It’s something the restaurant is taking quite seriously - staff had to go through a proper audition process across six weeks, including a panel of celebs to judge them, X-factor style.

John Vincent, LEON’s co-founder said: “In just six weeks we auditioned, hired and trained a team who can both prepare the full range of LEON’s menu AND belt out a show tune or pop classic in between times.”

So the next time you want to take in a bit of theatre without getting ripped off at the box office, stop in for a salad and take in the show. Or, you know, go to a different branch.

Where is it? 62 Shaftesbury Avenue, London, W1D 6LT