[SIGPLUS_EXCEPTION_SOURCE] Image source is expected to be a full URL or a path relative to the image base folder specified in the back-end but /blog/2015/german/gallery is neither a URL nor a relative path to an existing file or folder.
0
Shares 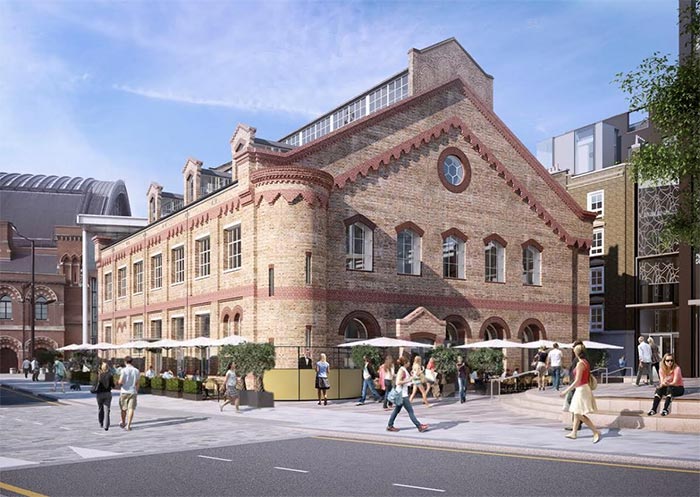 No, it's not some kind of new fitness craze, this is the latest restaurant from D&D that's opening in King's Cross. It's absolutely huge, as anyone who crosses between St Pancras and King's Cross will tell you (it's the building that was completely covered up until recently) and promises to be D&D's biggest restaurant yet.

Yes, it used to be a gym. It's taking over a grade II listed building right in between King's Cross and St Pancras (in front of Vinoteca) and the building used to be Britain's first purpose-built gym.

There's a lot inside. The three storey building will have a ground floor grand café, an outdoor terrace, a restaurant, bars and private dining spaces. The restaurant itself sounds impressive - described thus: "The open pass and windows overlooking the street will invite commuters and diners to view the grand main kitchen, completely rendered in black, above which sits a separate kitchen serving the upper dining area, with a dramatic double-height mirrored glass façade." And there's a huge outdoor terrace too.

There's a German chef too. He's Bjoern Wassmuth, previously kitchen director at Fairmont Hotel Vier Jahreszeiten in Hamburg. There will be grand café and brasserie menus including classic Mittel-European dishes as a nod to the site’s German origins. And expect a certain amount of German wine on the menu too and cocktails which will somehow also have cocktail clouds...

The inside has been designed by Conran and Partners. Obviously, great care has been made to ensure everything compliments the admittedly incredibly impressive building. And they'll retain little bits hinting to its past, like climbing hooks in the walls.

Hot Dinners popped over to King's Cross for a sneak preview of the German Gymnasium last night. And there's a lot to like from what we saw. A crack team of designers and architects have been working on the Grade II listed building - the first purpose-built gym in the country which opened its doors in the 1860s - and it's going to be very swanky when it opens.

We were shown round the downstairs all day casual dining cafe - think the kind of mittel-European grand cafes that Messrs Corbin and King are well known for - with a central bar. There'll also be a patisserie section here offering takeaway. Upstairs will have a cocktail bar and a more formal restaurant with tables and banquettes looking down from a gallery over the ground floor - much as Victorian folk used to do when the gym put on public displays back in the day. And outside there'll be a huge terrace with room for around 100 dining outside and a special all-weather bar.

Head Chef Bjoern Wassmuth told us a little about what to expect from the menu. As you might imagine there will be wurst on the menu - he's rather proud of the currywurst dish he has planned. There's also a rather impressive roast duck dish which is served as a half duck per person with two types of dumpling - bread and potato versions - and red cabbage. Sausages have been sourced from Germany, with a recipe exclusive to the restaurant. The good news for vegetarians is that they also have something to look forward to. There's a mushroom Schupfnudeln (GREAT word) on the menu - think dumpling meets spaetzle - which are first steamed and then fried in a butter sauce before being served on a celeriac puree. Check out the picture in the gallery below.

The German Gymnasium opens on 12 November 2015 at 26 Pancras Rd, London N1C 4TB. Look out for an exclusive Hot Dinners soft launch offer before that. Bookings are now open on their website. Find out more from them @TheGermanGym